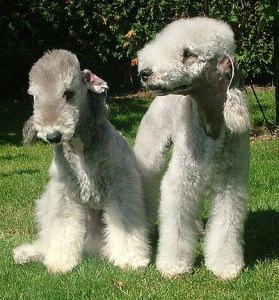 The Bedlington Terrier is named after the Bedlington Mining Shire in Northumberland, England. That’s where he was developed in the early 1800s. He was used to get rid of vermin and was also used as a race dog by the coal miners. He has great endurance and speed because of his slim body. He’s lovable and has a big heart. He has a woolly, curly coat that’s dark when he’s a puppy but gets lighter (sandy, liver or greyish colour) as he ages, making him look like a lamb.

The Bedlington isn’t fussy or mischievous. He has a gentle temperament and is great with children. He needs an experienced groomer to maintain his coat properly. He weighs 17-23 pounds and is 15 – 16 inches tall.