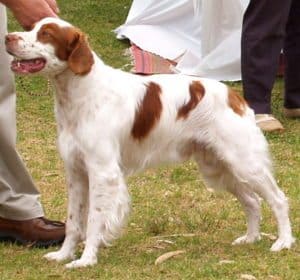 The Brittany was named after a province in France where he first came from. However, many developmental records of this breed have been lost. He resembles the Welsh Springer Spaniel and many think they shared common ancestry. Perhaps the two breeds mated around the year 1900, making their hunting skills even more powerful. The Brittany used to be called the Brittany Spaniel before having his name shortened.

He’s an agile, strong dog that needs lots of exercise to keep him occupied. He’s always alert and happy and has a keen attitude. His coat needs regular brushing. He’s 17.5 – 20.5 inches tall and weighs 30 – 40 pounds.