The Weimaraner used to be called the Weimer Pointer, named after the court that sponsored him. This dog has been bred from other German hunting dogs and is thought to have ancestors that were Bloodhounds. He was originally used to hunt bears, dear and wolves but that sort of game isn’t as freely available so he was modified to become a hunting companion and bird dog.

His sleek, short coat is a grey colour and this was how he earned the nickname “the grey ghost.” He’s fast, courageous, fearless, intelligent, has great endurance and a great sense of smell. He’s a very graceful dog with aristocratic features. He’s easy to train and is an obedient, friendly member of your family. He loves children and likes being one of the “pack” in his family. He likes lots of exercise. His coat doesn’t need much care and he’s 23 – 27 inches high. 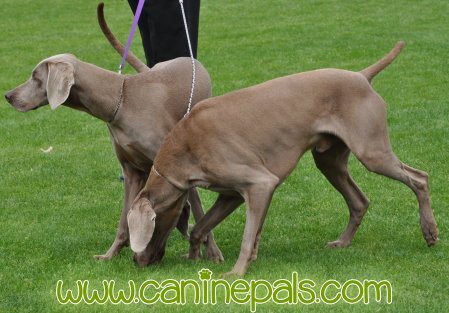