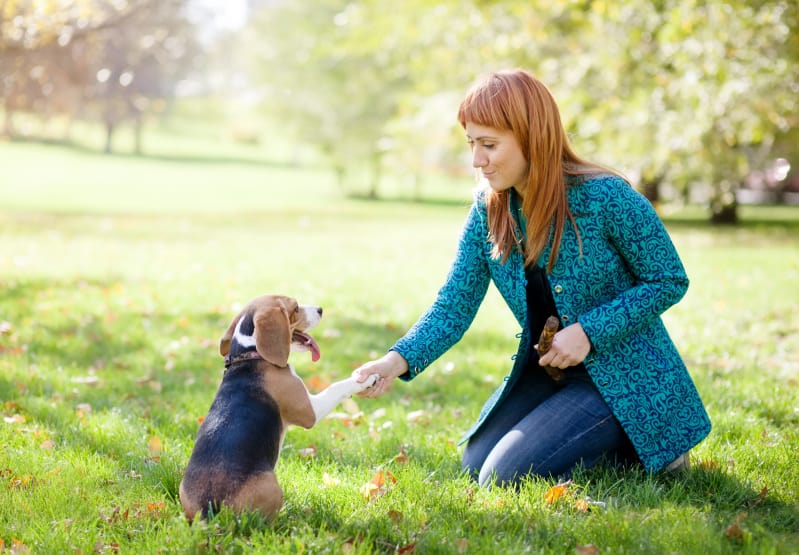 Important rules for dog owners include always ending a dog training session with something positive. Then your dog will come to expect that to happen.

If he won’t respond properly when you give a command several times, don’t give him a reward. Then try again but use an easier command. Go back to the harder task a bit later.

Always finish the training in a positive way. Give a command you already know he’ll always obeys. Then give him a reward for doing it well and give a finish command such as “release” or “free.” Don’t use ordinary words like “okay.”

At the end of a session, both you and your dog should feel like you have achieved something.

Dog training techniques should never contain any punishment or negative elements of training. You can’t hit, hang, chain jerk, yell and definitely never use an electric shock. Every training period should be positive, happy and upbeat and reward your dog for things he does well. PUNISHMENT is NOT the opposite of reward; it’s NO reward. Ignore wrong responses from your dog and if he fails to respond, he gets no rewards. Most dogs are keen to make their owners happy and to get valued resources such as food, toys and attention.

Dog walking rules can include on and off leash behaviors. If you plan complicated aspects of training such as him not being on the leash and you use the “down-stay” command, ensure you have already given him moderate exercise to drain some of his energy. Then it will be easier to make him stay in a reclining position and avoid setting yourself up for failure in the early training stages.

If food treats are used, they MUST be very small, about the size of the fingernail of your smallest finger. The food’s texture should be easy to digest, not need chewing and not crumble so it won’t make a mess. If any of these things do happen, your dog’s attention will be distracted as he licks up every crumb he can find. Never use large foods as treats because they take a lot longer to consume, and the concentration is lost.

If you intend to vocalise praise for a reward, do it in a singsong tone of voice as this is very pleasant for dogs. Make sure your voice is enthusiastic because that lifts the dog’s mood. If you pat him, choose the best options he likes. This includes tummy rubs, parting the dog behind his ears and gently stroking his face.

Note: Most dogs dislike having their heads patted so find out for yourself if this describes your dog.

If a dog hasn’t been trained, you’ll need to help him sit by holding a snack above him and making him sit before he gets it. If you’re successful with this, praise him well and give him the food. If he doesn’t sit, you may have to put extra tension on his collar or push his rump down.

Choose the reward before issuing the command. Another option is to give him rewards if he sits for more definite, longer periods of time so he can’t just touch his rear to the ground to win the treat. Make sure he’s firmly sitting before giving him any reward and you can slowly make the time longer between when he sits and when he’s rewarded for that.

Use easy words such as STEADY or EASY to teach him to associate the exercise with relaxation. You should also use a release command which can be RELEASE or FREE because these will let the dog know when he has done what you wanted for enough time.

After dog training has been successfully achieved in quiet environments, it’s time to carry out more training in different places where there could be numerous distractions.

Keep dog training in the yard, using his leash, but slowly make it longer and eventually not using it at all but he still obeys you without having his leash on. Training in busy environments is a good idea because it will test your control when he’s distracted.

The ideal scenario is to have your dog obey you all the time without needing the leash, even if there are distractions that may be tempting.

This level of your dog’s training will end up working but it will take a lot of time and hard work from you and your beloved pet. This is certainly a worthy objective.