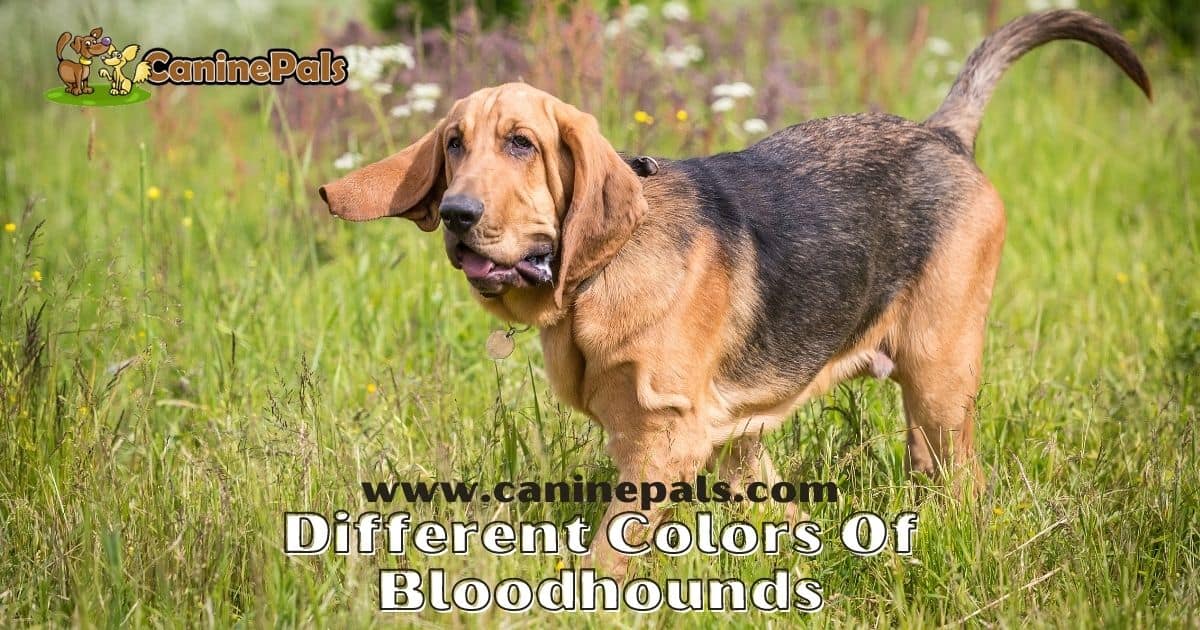 Bloodhound dogs are descendants of noble ancestors. They are calm and loving dogs with varying coat shades. You can learn about the different colors Of Bloodhounds in this article.

Do you remember the old school TV show character – The Droopy Dog? The character was inspired by the features of a bloodhound dog breed. Bloodhounds are physically large and strong dogs with calm and affectionate temperaments. They are also known as St. Hubert hounds due to their splendid scenting ability. The scent-hunting breed of these dogs is derived from the St. Hubert stain. They have been used as scent trail dogs during rescue operations by the law enforcement departments.

The typical average weight of a bloodhound varies from 80 to 110 pounds with 23 to 27 inches of height. With short hair, drooping ears, deep folds in loose skin with wrinkled face, and the coat varying from the tones of black & tan to brown & red – bloodhounds are being used as police dogs due to their incredible sense of smell. When bloodhounds are on the scent, they follow their noses by dragging on the ground,

This guide will cover all you need to know about these scent hounds: bloodhound dog breed, history, personality traits, and physical appearance, including different colors of bloodhounds. But, first, let’s discover the aspects of this adorable dog.

The Bloodhound appeared in Europe well before the Crusades. Two strains were brought from Constantinople, white and black. They have been in America for more than 100 years and immensely helped the police force, to the extent that evidence they discover is accepted in court.

This scent hound breed was known to discover and trace the tracks of animals from the first century A.D., which has now evolved as Bloodhounds. The early bloodhounds were called the Saint Hubert Hounds in the 7th century as the Saint Hubert of Belgium perfected this breed along with his monks.

A conqueror named William carried many bloodhounds with him when he arrived in England in 1066. That is why the modern bloodhounds are known to have a noble history because they are derived from breeds belonging to royalty.

By the 16th century, this breed became a means to track deer for recreational purposes, and this practice evolved to track down missing people by law enforcement departments.

Bloodhounds were preferred to track missing people because they do not tear off their target after finding them due to their affectionate nature. Their nature could be the reason why the poet Humphrey de Bohun used the name “Bloodhound” (pure blood) for these dogs in his poem for the first time in history.

Bloodhounds love to mingle with their family members as they are affectionate and playful. They look dizzy due to their droopy eyes but love to be around kids and share their playful energy with them. Training adult dogs can be a prolonged process because they are independent by nature and stubborn. But their patience and mild manners conquer their persistent personality trait.

Bloodhounds have good socializing ability, i.e., they quickly make friends with other dogs, small dogs and are tolerant towards kids. However, they are determined and may not obey your commands at times. For example, if a bloodhound has sensed a scent, he will follow it with complete determination without paying attention to his master’s command.

This breed can perform expressive whining and howling, which is an exciting aspect of their personality. In addition, they are dignified, docile, easy to make companions love to wander, and good at reward-training, friendly to strangers but bark up when they get excited.

Inheritance, training methods, and social habitat are the factors that affect their temperament. For example, too shy or playful breeds are difficult to train as their determined mind exceeds their instruction following ability. So, a bloodhound puppy can be developed into an active, obedient, and gentle family pet.

Bloodhounds typically stand 23 to 27 inches tall. However, males range from 90 to 110 pounds in weight, and females are between 80 to 100 pounds. With short and smooth coats, you will come across three different colors of bloodhounds:

A tiny speck of white can be seen on the chest, feet, and tip of the tail in significant strains. These Bloodhound coat color patterns are recognized as the following types:

The variations in recognized Bloodhound colors liver and tan, black and tan, and light to dark red are determined by alterations in the black and brown genes. Black nose, black eye rims & paw pads will be seen in a Bloodhound if he inherits black variant dominantly.

Which Habitat Does A Bloodhound Require?

Keeping a Blooded hound is challenging Bloodhound owners. because they are slow learners due to their determined nature. A bloodhound can be clumsy during adolescence and may follow unusual scents fearlessly. They also tend to chew things that smell different or bless their nose.

Following are the habitats of bloodhounds that you need to consider before keeping them:

How To Groom A Bloodhound?

Following are the essential measures to groom your or adult or puppy bloodhound, based on their wrinkled face, large body, drooling ear, and thick coat:

Is Bloodhound A Good Dog To Keep?

Bloodhounds are reliable companions and make great house pets because of their calm, loving, and good nature. They have a docile personality trait which is suitable for many dog lovers. Keeping a Bloodhound means you need to keep them going with physical activities so that they do not become lazy, and you keep finding them resting on the couch.

A home with children is a perfect place to keep a bloodhound, and these dogs are kind to humans. Although they are difficult to train to their independent personality trait, their calm nature and controlled temperament make them easy to handle and be with.

Puppy training is more accessible than a late adolescent as puppy bloodhounds develop into obedient adults by early intervention. This breed possesses good energy, no matter how lazy they seem by their droopy eyes. They are always willing to play with and be around their family members.

Some Facts About Bloodhounds

Here are some interesting facts about this dog breed:

Q. How smart are Bloodhounds?

Bloodhounds are an obedient and intelligent breed. Their smartness is known mainly due to their efficient scenting and tracking abilities.

This breed is a great family pet. They are docile, playful, tolerable, and affectionate, especially towards kids. However, they need good exercise to stay energetic.

Q. Bloodhounds belong to which breed?

Hubert – a French monk of the 7th century, kept their ancestors for hunting purposes who were later named Saint Hubert hounds and evolved as Bloodhounds.

Q. What is the lifespan of Bloodhounds?

Bloodhounds can live from 10 to 12 years.

Q. What are the personality traits of bloodhounds?

They are calm, loving, and docile but independent and determined simultaneously. They follow attractive scents passionately irrespective of their guardian’s command.

Q. How to play with a Bloodhound?

Take a ball with which your dog usually plays. Mark it and after applying a scent to the ball. Mix it with the other unscented balls and let your bloodhound dog find it passionately. This would be an excellent time for your dog to embrace its nature.

Q. What temperament do bloodhounds have?

They are calm but stubborn, affectionate but independent, and gentle towards family members and strangers.

Bloodhound dogs shed moderately. Most of the shedding is seen seasonally during autumn and spring. The dense and short coat can be cleaned with a bristle brush once a week to deal with bloodhound shedding.

Q. What colors do bloodhound dogs have?

Bloodhounds have three tones of colors with a white patch on the feet, neck, or tail. The different colors of bloodhounds are Black & tan, Liver & tan, and varying shades of red.

Lastly, this is all about the bloodhound breed born with the incredible scenting ability and attractive personality traits. If you want to keep a bloodhound as your companion, make sure you go through a guide that specifies its personality traits and training considerations.

The Bloodhound is a dog who will take charge if you let him. So you need to maintain your authority while still giving him all the love and attention you can. He’s very affectionate and needs to be groomed regularly to feel, look, and smell good.

So, out of these different colors of bloodhounds, which color would you like in your bloodhound?