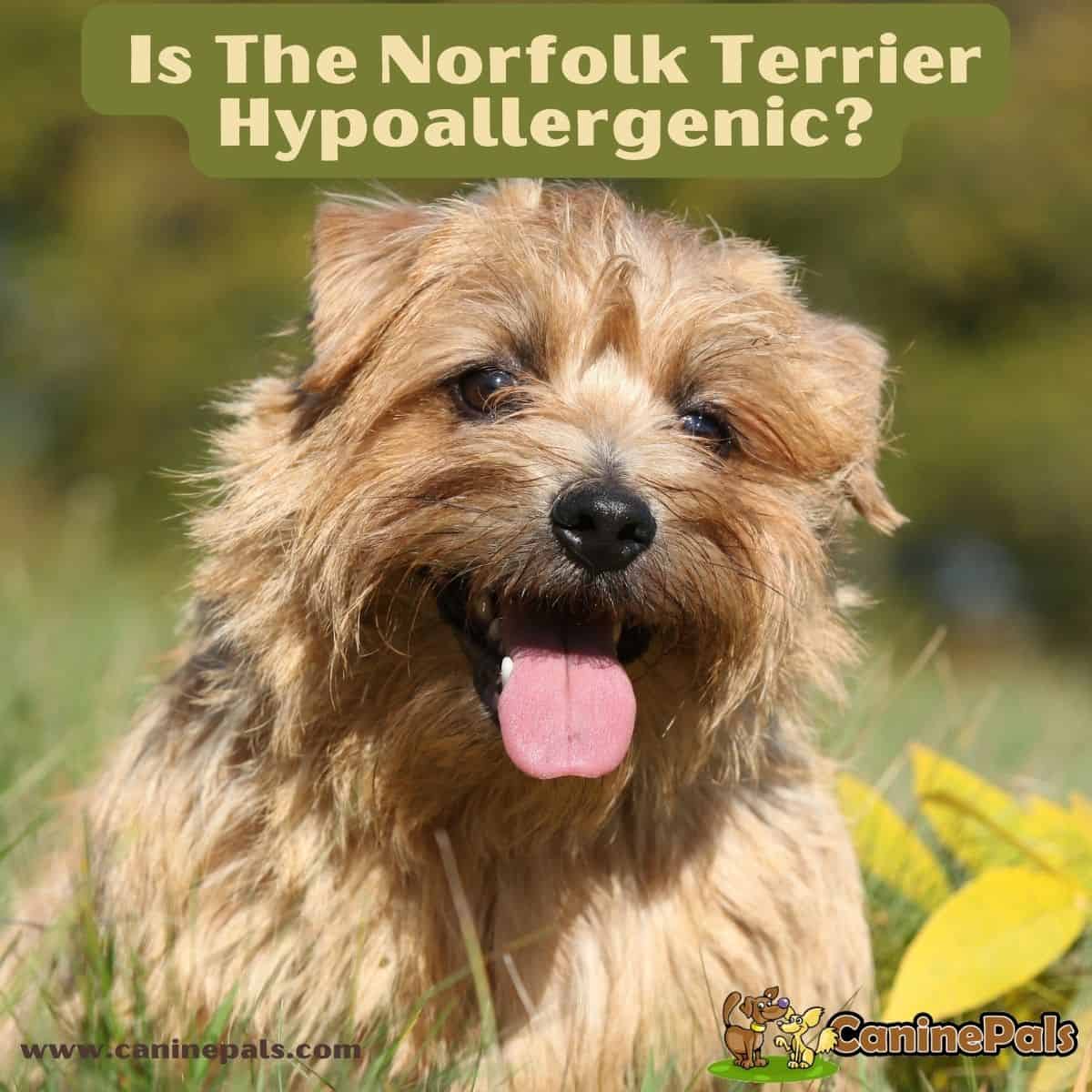 Norfolk Terriers are very playful and loving dogs but if you suffer from allergies you’ll need to consider the effects on your health before considering getting a Norfolk Terrier puppy. On this page, we’ll answer the following question: Is the Norfolk Terrier hypoallergenic? Let’s check this out.

The Norfolk Terrier is considered to be hypoallergenic. No dog breed is totally hypoallergenic, but these dogs shed less than most breeds. They also shed throughout the year rather than in certain seasons, avoiding a sudden shedding of hair which can be a problem for those suffering from allergies.

If you are allergic to dogs or other animals then you’d do well to heed the advice of an experienced breeder of Norfolk Terriers, Shiela Foran, who says that she cannot definitely say whether this breed of dog is hypoallergenic or not. She advises anyone with allergies to try spending some time with this dog before buying one.

The reason for this advice is simple. Despite the dog, everyone reacts slightly differently and sufferers of dog allergies may react more to certain breeds and less to others.

What is a Norfolk Terrier?

A Norfolk Terrier is a small, compact dog that is known for its friendly and outgoing personality. They are also known for their intelligence and agility.

Norfolk Terriers are a cross between the Norwich Terrier and the Black-and-Tan Terrier. They were originally bred in England to hunt rats in the Norfolk area. They were also used to hunt foxes and other small animals. They are known for their long, wiry coats and their ability to hunt in packs.

The Norfolk Terrier is native to England and is among the smallest working terriers. He was formerly regarded as the same as the Norwich Terrier. He’s a barnyard ratter and fox hunter. In 1979, the drop-eared breed took the name of the Norfolk Terrier while the prick-eared breed remained as the Norwich Terrier. He works equally well on his own or in packs and is hardy, compact, and very active.

He easily adapts to different environments so he can live in the country or the city. He’s loyal and a devoted companion, His coat is wiry and resistant to the weather. Coat colors can be black, red, tan, wheaten, or grizzle.

Norfolk Terriers are the Perfect Dog for People with Allergies

Norfolk terriers are one of the better small dogs for people with allergies. They have a low to no shedding coat, which means they produce fewer allergens than other breeds. These little dogs also don’t require as much grooming as other breeds, which helps with allergies too. This does not mean, however, that they shouldn’t be brushed. Brushing a dog regularly helps remove matted hair that may cause allergies and removes dead skin cells from the fur.

Norfolk terriers are known for their wiry coats. Their coats can be black, brown, or tan in color with white markings on the chest and feet. The hair is usually short but can grow to be longer if it is not trimmed regularly.

What is the Reason for Allergic Reactions to Dogs in Some People?

As explained by Scientific American, most allergic reactions are not caused by hair or shedding of the dog but a protein in the dog’s saliva. This means that no dog can be truly hypoallergenic.

The reason why there is a connection between the shedding of dog hair and fur and human allergies is that the saliva protein exudes from the skin and is transferred to the hair of the dog. As dogs such as Norfolk Terriers shed less than other breeds they are less likely to cause allergic reactions in people who are sensitive to this protein.

However, different proteins exist in different breeds and some of these proteins may affect fewer people than others. Therefore two factors affect the potential of the Norfolk Terrier to cause allergies in people: the type of protein from the dog’s saliva that a person is allergic to and the amount of shedding of the dog.

It just so happens that the Norfolk Terrier is much less likely to cause these allergies because of its less frequent shedding and also due to the type of coat it has.

In fact, there is even less likelihood of an allergic reaction to a female or a neutered dog as they often produce less of the proteins that can cause allergies. Here is some research on this.

What is the Evidence that Norfolk Terriers are Hypoallergenic?

Norfolk Terriers have a double coat which means they shed less than other dogs because the undercoat is not as thick as the topcoat. The topcoat sheds more because it has to protect the undercoat from dirt and debris.

There doesn’t appear to be much in the way of scientific research to confirm that the Norfolk Terrier is truly a hypoallergenic dog breed, but many claims they are as close as any dog can come to this.

According to Preferred.com, the Norfolk terrier is classed as a low-shedding dog breed and requires little grooming. It claims the dog can be included in those considered hypoallergenic.

Also, on this website, the Norfolk Terrier is described as a hypoallergenic dog. There is also other useful information about this dog breed that is so popular.

Final Thoughts on is the Norfolk Terrier is Hypoallergenic or Not?

The Norfolk Terrier is one of the smallest terriers according to the American Kennel Club and as such, they shed less hair than larger dogs. The kind of hair they have and the lack of sudden seasonal shedding mean that they have less hair which drops off the dog and floats around the home. The Norfolk Terrier is more hypoallergenic than most other dog breeds but can never be totally hypoallergenic because shedding does occur if only at low levels.

It is not the hair that causes allergies in people but the dander, or dead skin cells which become trapped in the falling fur of dogs. Within these skin cells is a protein from the dog’s saliva which is the real culprit for the allergies that sensitive people have as a result of dog shedding.

Fortunately, as Norfolk Terriers shed less they deposit less dander around the home and their coats can be managed quite easily due to the wiry nature of the hair. Norfolk Terrier grooming is probably best left to a professional groomer.

Any person who is concerned about a possible allergic reaction to this dog should first test spending time with one and make sure they do not suffer allergies before getting their own Norfolk Terrier.
Copyright CaninePals. All Rights Reserved.