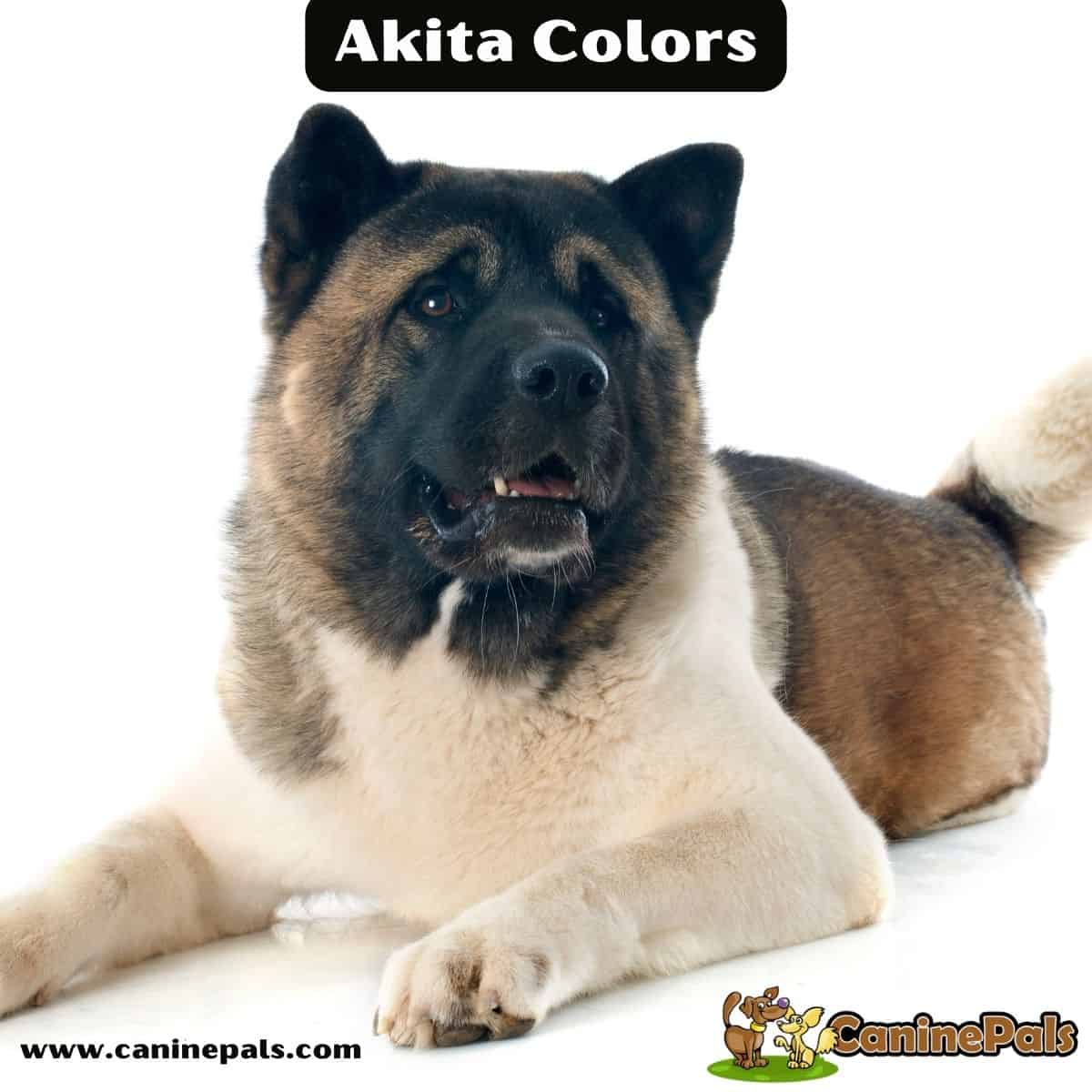 Tough as a tiger, and handsome like their cousin Shiba Inu, Akitas are a treat to have around. They’re big, fluffy, and pack on the muscle that can take down the big bears.

They’re super quiet, so quiet that they’re labeled as ‘The Silent Hunters’. If you want to keep a fur buddy, that won’t disturb your neighbors at all, Akita can be your best bet. They won’t make a fuss at all unless the threat is serious.

As there are two main strains; the American Akita and the Japanese Akita Inu, their coat color variations are endless, from darker shades to lighter fawn shades, Akitas come in all!

Liver and the Merle marking pattern is an AKC breed disqualification.

Following are some of the stunning coat color variations in Akitas:

According to the official American Kennel Club breed standard:

Any coloring including white; brindle; or pinto.

Colors are rich, brilliant and clear and markings are well balanced, with or without mask or blaze. White Akitas have no mask. Pinto has a white
background with large, evenly placed patches covering head and more than one-third of body.  Undercoat may be a different color from outer coat. Disqualification – Merle marking pattern.
Liver color.

Let’s have a look at some vital stats of Akitas :

Akitas are more dogs than most people can handle. Unless you’re experienced in keeping dogs, Akitas shouldn’t come across your mind. They aren’t well-suited to the first-time owner since they’re a big responsibility.   You can look for an Akita that needs to be fostered, to get a taste of what keeping this breed can offer.

If you’re content with it, then go ahead. You can get them from the reputed breeders licensed by your local kennel clubs, for roughly around $700 to $2000, depending on their bloodline and strain.

Akitas have different coat types depending on the climate they’re currently living in, however, most of them have the standard double coat that can withstand tougher climates with ease. Though Akitas also come in longer coats, they’re most suited to the colder mountainous regions.

The Akita is amongst the seven breeds recognized as national treasures in Japan. He’s a good hunting dog but also can perform in shows and do therapy work. His coat is double the thickness and can be any color. His trademark is his tail; it curls across his back. When a baby is born, he/she is given a statue of an Akita as it signifies happiness, health, and long life. Helen Keller brought the first Akita to the US in 1937.

This dog is nicknamed the “Silent Hunter” but he also has powerful guarding instincts and will make lots of noise if he senses an intruder in the home. He grooms himself the same way a cat does but also needs brushing each day as well as a daily walk.

The earliest Akitas can be traced back to the 17th century when they were bred in the mountains to hunt animals like deer, boars, and bears. In the 20th century, they were heavily mixed with other breeds and due to this currently, there are two main strains of Akita.

Akitas make great pets, as a matter of fact, they’re one of the most loyal breeds out there. Although, the initial period for you and the dog might be tough, but once you’re through it, you form a close bond with each other that can withstand time and hardships together. You might have various questions popping up in your mind regarding Akitas, sit back and relax, we’ll make sure that after reading this article all your questions will dwindle away.

Yes, just like every other dog out there, Akitas do bark but here’s the catch, they bark very less as compared to the other dog breeds out there. Nobody likes to have a noisy dog that can be irritated easily and would continue to keep on barking the entire night and ruin everyone’s sleep.

Well, luckily Akitas aren’t that kind of dog. If you have neighbors that are pretty nosey about you keeping a pet dog, then getting an Akita might be optimal for you. Akitas are one of the most silent breeds out there, this silent characteristic has allowed them to remain stealthily in the mountains whilst hunting for prey.

No wonder why they are called ‘The Silent Hunters’.However, there are instances where they can bark, and that might be when there’s a potential threat nearby. It isn’t like that they’ll bark at anyone passing by, but they will bark when they sense something dreadfully suspicious. For example, your dog might see someone other than you coming out of your car or see a bear nearby, which can, in turn, set their barking alarm.

Sometimes, they’ll bark just to grab your attention, but don’t worry they won’t bark their heads off like other breeds. Their barks are less vocal than other dogs, and won’t even bother your neighbors at all. Some of the Akitas bark so less, that their owners often forget what their bark sounds like.

Regardless of being bred for centuries, Akitas stay true to their wild roots. They are territorial and love to lead the packs. This isn’t bad since they used this trait to survive out there in the wild, but they can potentially carry this trait to your home as well. Nobody wants a dog that’ll scare everyone away from the walking track in the morning or even worse cause the other dogs to go berserk in its presence.

Once an Akita has made up its mind to do something, it’ll do it no matter how tamed it is. The best possible way to socialize your Akita would be to keep it muzzled around other dogs and set the leash to loose. If you think your dog might get lonely, then get a pair of Akitas, preferably a sibling pair.

They socialize with their blood without any issues and don’t get bored at all. Always keep in mind, no matter how cute they look from the outside, from the inside they think like wolves and can punch way above their weight when their instincts kick in.

Most double-coated dogs are easier to maintain, and Akitas fall in the same category. Their double coat is pretty simple to groom, however, you have to take few considerations. They shed their coat two or three times a year, and it can get pretty messy if you’re keeping Akita indoors. If you do find fur on your furniture, or other household items, then investing in a good vacuum cleaner should be on your list.

You can also shampoo your dog, but be careful Akitas have sensitive skin that can react to the ingredients present in shampoo, it is only advised to shampoo them 3 to 4 times a year.The average shedding window lasts between three to four weeks, so don’t worry if your Akita sheds its furs, It is totally normal!

Akitas are large breed dogs, and like the rest of the large breed dogs, they grow pretty slowly. You can expect an Akita to reach its potential height around the tenth month to a year, given that their diet and exercise remain consistent and they don’t get sick.

They continue gaining weight for the years to come and can be at risk of obesity if they’re not getting enough exercise. The average one-year-old Akita Inu should weigh somewhere between 70-100lbs.

The average height for the male Akita Inu is 26 to 28 inches, whereas for the females it hovers around 24 to 26 inches. The best way to determine just how big your Akita Inu will get would be to ask the breeder about the parents, you can then add the correction and estimate the size of your Akita Inu.

One more important thing, if you find that your Akita is growing too fast, then get them to the vet ASAP! Growing fast can be an indicator of many issues such as early hip dysplasia.

This can be a tough relation to form and maintain. Akita and the children aren’t well suited for each other and there are reasons for that. First of all, Akita is a large-sized breed, and having them around toddlers can be risky. They are incredibly sensitive and can get irritated easily. He can be calm, energetic, or aggressive so he should always be supervised when other animals or small children are around.

Along with training an Akita, you might as well have to train your kids to behave appropriately around the Akita dog. You have to take care of a lot of things in order to make this relationship work.

You can avoid most of these problems by introducing them to your kids right from the puppy stage, however, the following are some of the tips you can incorporate to mitigate the problems.

Akitas like having their personal space, they love chewing toys, and they might take a few of your items as well for their leisure play as well. Bear in mind, in their presence do not take these items back from them, it’ll set their mood on fire and it can be really hard to get their mood to baseline.

If the dog is playing, let it play, and ask your children to not come near it at all. You can counter this issue by training the Akita when it is just a pup, it will likely reduce its aggression.

As much as they love to roam around, they love to sleep more than that. Once they’re deep in their sleep and dreaming, it is your duty to let them have their nap peacefully, and keep your children or other pets away from them. Once they’re disturbed they can act very grumpy, and that won’t be a pleasant sight for anyone at all.

While most of the dogs, when you shout at them, will start whimpering around scared of you, sadly that isn’t the case with the Akita Inu. They have astoundingly sensitive ears, which can detect any emotional imbalances in the environment.

Unlike other dogs, they aren’t afraid to show their aggressive sides. So here’s the tip, tell your kids to never shout at the Akita, no matter what.

Dogs crave leadership, and in the case of Akita Inus, they need strong leadership. You must be willing to lead your dog like the pack leader.  That’s the only way the Akita will learn to obey you and your children. Once Akita learns to respect you and act on the commands, they will learn to behave around kids as well. That’s why Akita Inus aren’t advised for first-time dog owners.

The next time you are looking for a new furry friend, consider an Akita. With their beautiful coloring and sweet personalities, these dogs make great additions to any family.

And if you’re looking for a dog that can handle plenty of outdoor activity, the Akita is a perfect fit. Just be sure to give your new pup plenty of exercise and training – they’ll repay you with years of companionship and love.