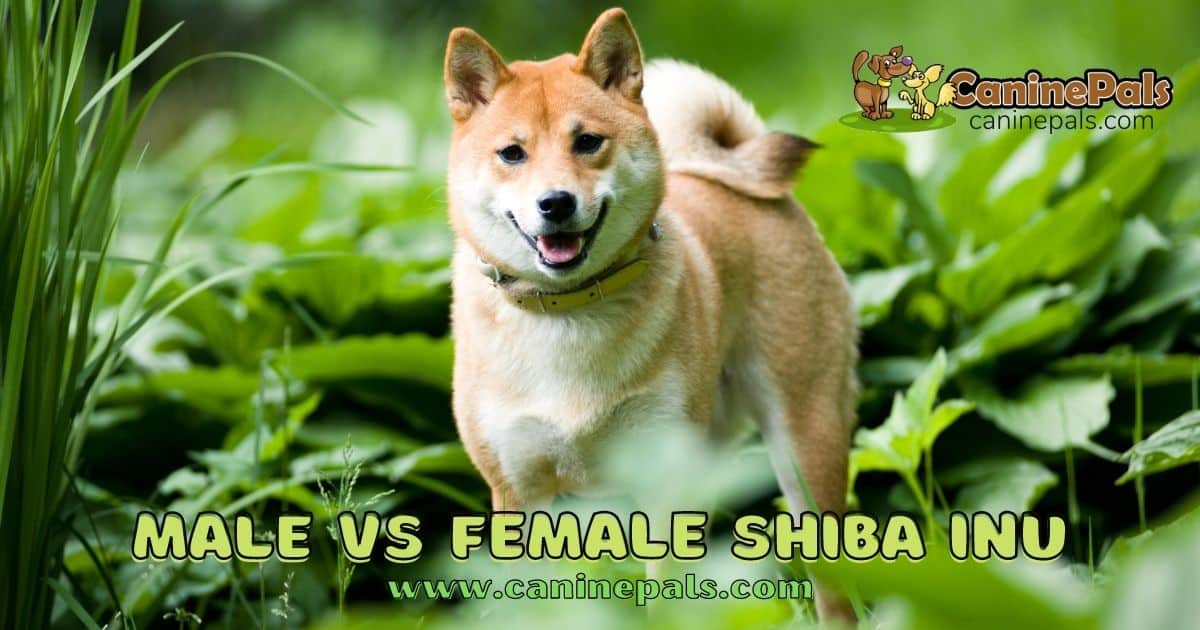 Short and small but agile, muscular and active – these are the defining traits of this ancient Japanese dog. Loved and adored in all of Japan, once the best of hunter dogs is a family companion of today. It is always pretty easy to differentiate between male vs female Shiba Inu.

The Shiba Inu has a big round face, the size of which is proportionally large. Two almond shaped black eyes adorn its face. A long nose ends in a black tip and the small mouth makes it look cute and adorable.

This article is all about are male or female Shiba Inu better? We are going to discuss this dog in a lot of detail, so read on to find out all the facts.

It is very easy to differentiate between male and female Shiba Inu. The physical characteristics and temperament is very different for Shiba Inu male vs female.

The first major difference between male vs female Shiba Inu is that of their height. A male Shiba Inu can grow upto 16.5 inches whereas a Shiba Inu girl can grow to 15.5 inches. The difference of an inch makes it a lot easier to differentiate a male from female.

●       Shiba Inu is One of the Six Spitz Japanese Breeds

Shiba Inu is bold, energetic and like the color of its coat, fiery. Japanese describe Shiba Inu with the following three mental traits:

These three traits combine to give what is known to be the strong-willed, intelligent and loving temperament of Shiba Inu.

Shiba Inu is a small dog when compared to other dog breeds. But the small size adds to its qualities. Because it is small and compact, it can move around easily. It is an agile, fairly quick and energetic dog. Shiba Inu stays alert all the time and because of this trait, it can be made a watchdog.

Shiba Inu’s self-perception is that of a strong dog. It moves around and walks with such dignity that the onlookers can easily guess the larger than size attitude of this dog. Shiba Inu is an independent and free-thinking dog. It has remained free and that is why it gets difficult to tame the spirits of this dog.

Early socialization is highly recommended when it comes to Shiba Inu. If it is not socialized early, the dog may not be good for apartment living.

When it comes to training, Shiba Inu may be difficult to train. It is really hard to get this dog to understand the idea of subordination.
Similarly, this dog is too possessive. It guards its territory and possessions. It is over protective about these things. However, these behavior traits can easily be corrected if this dog gets to have early socialization.

Shiba Inu is a good natured dog that stays alert. This dog is loyal and loves the members of its human family above everything.

He is muscular and strong. Other than that, Shiba Inu is intelligent and has an idea about his own self.

On one hand, he is loyal and loving to the members of his family but on the other hand, he can be very suspicious of strangers. Suspicion is not the only personality trait that is worrying. Shiba Inu has a tendency to be a guard dog. Because of his guarding nature, he is over possessive.

Shiba Inu marks his own territory and then protects it from breach by any stranger. If any dog might get into his territory, Shiba Inu can behave in an aggressive manner towards that dog. Other than dogs, he can scare small animals. It is in his habit to chase the one that annoys him.

The Shiba puppy is usually very nice tempered. Curious and playful, it is always best to train a puppy before it is too late. Shiba Inu, after some time, gets stubborn. The training must give special attention to calm down the free spirit of this independent dog.

Male and female Shiba Inu have their distinctive characteristics. Whether a male or a female is better for you totally depends on your choice. However, there is a difference in the traits of these dogs. The differences are described below in detail.

●      Behavior Difference Between a Male vs Female Shiba Inu

A female Shiba Inu can cause problems for novice dog owners because of its peculiar behavior. If you are a new dog owner and intend to own Shiba Inu, go for the male Shiba Inu rather than a Shiba Inu girl.

Male dogs are open hearted and love to play with everyone. Females are very choosy and picky about who to play with.

Dogs have considerable behavioral and temperamental changes if they are neutered and Shiba Inu is no foreign to this phenomenon. Intact male dogs tend to be very dominant. The dominance can be seen in every aspect of their life. It is quite common for a male Shiba Inu to mark its territory by humping or by lifting a leg.

A neutered male Shiba Inu, however, loses much of the dominant inclinations. A neutered dog behaves well in all the aspects of his life.

The female Shiba Inu, if neutered, can become much more sophisticated. The free and independent nature is under control and it does not try to dominate as well. A fertile female dog, however, is a total mess.

During the time when the female is hot, it is prone to getting pregnant. Male dogs will follow her to the house. Also, you will have to face the bloody discharge. All this nuisance can be avoided by getting your dog neutered.

It is a proven fact that male Shiba Inu is playful, joyful and loving whereas the female is more independent and free spirited. A male dog can mingle well with strangers. Although the male dog is also cautious as it is the breed characteristic, the male is cautious to an agreeable limit.

The female Shiba Inu is far more aggressive and cautious. It can become a great guard dog but when it comes to friendliness, it is going to disappoint you. Even a highly trained female is less friendly.

Hence, there is no doubt in the fact that the male dog is far more friendly than a female Shiba Inu.

It has always been mentioned that a male dog is far more agile, playful and active than a female dog. No one knows why a male is more active, but it is an established fact.

Male dog loves to play around with the other members of the family. They would also need the daily dose of their exercise. You can take them out for a walk around the neighbourhood. You can also take your dog on a short hike or trail. But you cannot expect the same from the female.

A female is of carefree and independent spirits. Shiba Inu girls would always display lower levels of energy. However, there is a catch which you need to understand. Although male dogs are more active yet they are more destructive around the house.

With greater energy, they are more likely to chew, bite and throw away stuff. Females are more calm and cool. Hence, it can be concluded that although males are more active yet they are also a bit destructive. Females might be a bit inactive but the inactivity means calmness.

A Shiba Inu girl is a cleanliness freak. It is in her habit to keep herself clean all the time. Playing in the mud might be unimportant for her as it would get her dirty. She spends time and effort to keep her clean.

A male dog is prone to get dirty. He would love to play in the mud. A muddy pool is an excellent treat for a male. Because of their loving and playful nature, male Shiba Inu get dirty very easily.

Males also have a tendency to mark the boundary of their territory by lifting a leg. This way they pee and define the boundaries of their space. If not socialized early, the inside of your house is supposed to get messy. However, if you get your dog neutered, you can get away with this problem.

A female on her period is a total mess as you have to clean the bloody remains. A few times of the year when the female is on her period, it remains very unclean. Getting it neutered is the best solution to prevent this problem.

Hence, we can say that a female is cleaner than a male in all circumstances other than being on her period.

Heading towards a final answer, we can say that both male and female have different traits and it is up to you to choose the best traits you want to see in your dog.

If you want a playful, active, agile and loving dog then you should go for the male Shiba Inu. All these traits are found in males.

However, if you prefer a dog that can protect your house from suspicious persons and you want a clean dog, then the dog of your choice is a female Shiba Inu.

The Shiba Inu is native to Japan from where he traveled around the world. Loyal to the family, friendly, loving, playful, agile and with a muscular build – Shiba Inu is loved by dog owners throughout the world.

A comparison between the male vs female Shiba Inu shows that both have specific qualities that you must consider carefully before buying the dog. A male dog is playful and loving while the female is a better guard dog and cleaner.
Have a happy Shiba Inu experience!