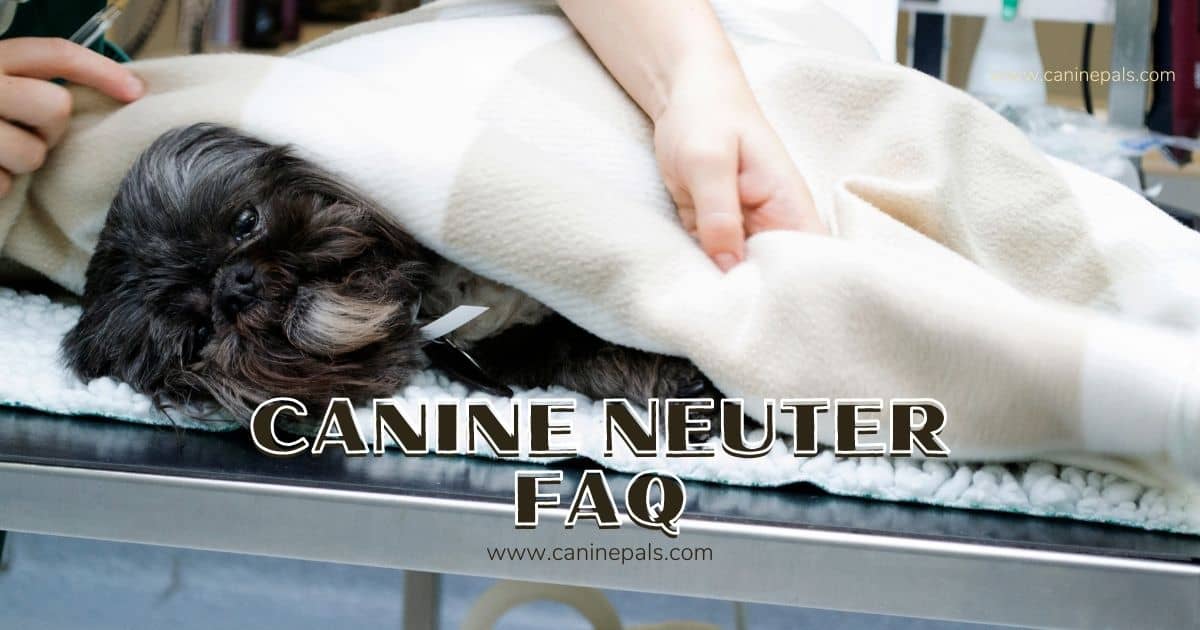 Canine neuter surgery provides several health benefits for dogs. Before you make the decision to proceed with the dog neuter procedure familiarize yourself the dog neutering procedure.

You will probably want to ask how do vets neuter male dogs and should ask about any canine neuter procedure questions you might have? Most  owners usually have questions about dog neuter surgery side effects, the risk of dog neutering complications and male dog desexing aftercare instructions.

Why do People Neuter Dogs?

Dogs who are not neutered i.e. still entire are vulnerable to many health issues. One of the major worries is about the prostate gland. Testosterone can gradually cause the gland to grow bigger during the dog’s lifetime.

As the dog ages, it often becomes uncomfortable and if it grows so big, it may affect your pet’s ability to defecate. Infections can be caused when the prostate’s affected and neutering is the only way to solve this problem.

If your dog is neutered, his prostate may shrink a lot. It also prevents prostatitis and benign hyperplasia (an enlargement), both issues that occur as a dog gets older. There’s also a widely-held belief that if you neuter your dog, it will prevent the onset of prostate cancer. However, this is just a myth.

There are other benefits of having your dog neutered and they include: tumours in the anus and testicles, prevention of some forms of hernias and excessive preputial discharge.

The only behavioural changes that may happen are those that are affected by changes in hormones. Your dog’s friendliness, playful nature and his social interactions with other people won’t be affected. The behaviours that generally change are the negative ones.

How Do They Neuter a Male Dog?

Canine neuter surgical procedure involves the Vet cutting an incision a little forward of the scrotum. This incision is where the vet pulls the testicles through. Stalks are cut and tied and so castration is now done.

Do They Remove Testicles When Neutering a Dog?

If his testicles aren’t removed, the above-mentioned benefits won’t be realised. The vet may or may not use stitches for the incision.

Male dog desexing aftercare can occasionally include giving painkillers to your dog, which will need to be given for the first few days as per your Vet’s instructions.

What to Expect after the Dog is Brought Home from the Vet Hospital?

Male dog neutering recovery in younger male dogs is often very rapid. Owners should expect a male neutered dog’s scrotum to be swollen for the initial few days following the dog neuter procedure.  Some owners may think the procedure wasn’t done at all. If it’s an immature dog, his empty scrotum will flatten as he ages.

If he is as mature dog, it will stay as a skin flap. Occasionally the incision is slightly bruised.

Most dogs want to play as soon as they get home but, to ensure the incision stays intact, you need to stop him from playing boisterously.

Best Age to Neuter a Dog?

Provided that both testicles have dropped, age for dog neutering is after the age of eight weeks. If a dog is neutered before he hits puberty (around the six month mark) often grow larger than dogs who have it done after puberty.

Testosterone causes bones to stop growing so if the dog doesn’t have testosterone, the point at which the growth is stopped occurs later in his life.

The same health benefits and behaviour of the prostate can happen regardless of your dog’s age. This means no dog is “too old” to gain the benefits. Most vets say the ideal age for dog neutering is six months old.

Side Effects of Neutering a Male Dog

Will the dog become lethargic or obese?

Your dog’s appetite and level of activity won’t change after the procedure. Nor should he gain weight.

His interest will drop but he’ll be aroused if he’s near a female dog in heat. Mounting is sometimes a sign of dominance and a male that has been neutered may mount for many reasons, not all motivated by sex.

Can male dogs still mate after being neutered?

Male dogs who are neutered as adults may retain the ability to mate with a bitch in season. There is no chance of puppies resulting from such a mating.

What if his Testicles Haven’t Dropped?

Tumours are more common in dogs with undescended testicles. They might get twisted on the stalks and cause potentially life-threatening inflammation. Neutering is strongly recommended for dogs if their testicles haven’t dropped.

However, the procedure is more complicated. The testicle might be under the skin along the path it would have taken to descend to his scrotum or it might be in his abdomen. The vet may need to do some exploring to locate it, so he may have two incisions.

The other testicle will be under-developed and sterile. If one has descended, it will be fertile. However, because retaining a testicle is genetic, it’s usually fertile and the dog shouldn’t be bred until after he has been neutered.

Are you Legally Required to Neuter your Dog?

Check with your local government office or council as some places do make it illegal not to neuter a dog because they’re trying to control the population of the pets.