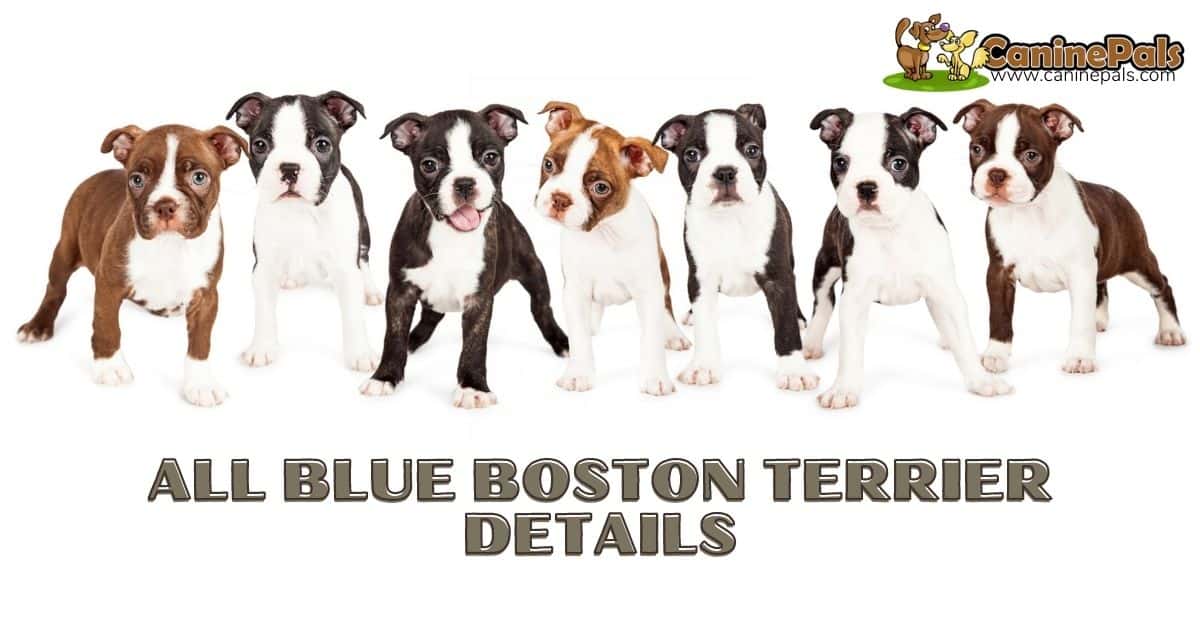 A little lively companion, known for the distinctive markings on its coat that make him look like wearing a tuxedo, the Boston Terrier is the Gentleman of American dogs.

Gentle in behavior, affectionate in companionship, kind to all the members of its human family and loyal to its owner – Boston Terrier is impeccable in its manners.

What is a Blue Boston Terrier?

All the Boston Terriers have originated from one dog named Judge that came from Liverpool, England. It was owned by a Boston man named Hooper and the dog has become famous with an alias Hooper’s Judge.

Hooper’s Judge was bred to a female dog named Gyp and their offspring is the all famous Boston Terrier. All the purebred Bostons can trace their roots to them.

Unfortunately, an all Blue Boston Terrier isn’t a purebred dog. The blue color is the result of poor breeding practices.

The blue color occurred because of the mutation in the chromosome pool. Hence, instead of having a natural color, the mutated dog is blue, silver or grey in color.

American Kennel Club (AKC) believes in the ideal representation of every breed and registers only those dogs that display a certain specific and peculiar criteria related to colors. A purebred Boston Terrier always has a coat of white mixed with any other color. The other color usually is black or seal. However, in sunlight the seal color also appears black.

AKC also recognizes brindle and white, and seal and white to be the colors of purebred Boston Terriers. However, it does not recognize other colors such as solid black, tan and black and liver (red) and mouse (blue). Even an all white coat is not recognized to be purebred by AKC.

The case of the blue Boston Terrier is peculiar. It descends from a line of dogs that can be traced back to Hooper’s Judge and Gyp. However, there has been sufficient mutation making its coat blue in color.

It is not recognized by the AKC. However, it is a Boston Terrier by all counts and though it may not be purebred, many dog loving folks happily own a Blue Boston Terrier.

They can grow from 12 to 17 inches high. The height of the female terrier is smaller than the male terrier. The life expectancy of the Boston Terrier is between 13 to 15 years.

The blue Boston is a medium sized non-sporting dog. It usually has a blaze between the eyes with a muzzle that adds to its beauty. With eyes brown in color and nose black,  the blue Boston Terrier has erect ears and a short tail. Its compact size makes it a perfect fit for small apartments.

A Blue Boston Terrier is known for its lively and playful nature. It does not like to be left alone for it always prefers company. This trait makes it the best family dog. Not only is it friendly with adults, this dog is very kind to children also. Even it tolerates the presence of other dogs.

With shedding levels below minimum, fortnightly coat grooming requirements and drooling close to zero, the blue Boston Terrier is one of the cleanest breeds among many.

The blue Boston Terrier wants non-stop fun. It wants to stay with family and wants to actively participate in the chores. Another desirable characteristic that puts it ahead of others is its inclination to not bark. It barks only to alert its owner. It stays calm otherwise.

As it is evident from its name, A blue Boston Terrier has a blue coat with occasional white markings. Some dogs even have a blue nose as well as blue eyes. Other Blue Boston Terriers are not blue but grey or silver and give a shiny silver hue when seen in sunlight.

The coat of the Boston Terrier is pretty smooth and fine. The fine coat is easy to brush and it should be brushed twice within one week to keep the coat healthy. Brushing removes any ticks, burrs and fleas that may infect the skin.

The blue Boston Terrier is an intelligent dog and that is why it is easy to train it. The training of these dogs works similar to any other dog and works on the principle of rewards and punishments.

A blue Boston loves to be respected. While training, it is extremely important that you should be calm and composed. Never train your dog when you are angry or you might scold it. Scolding a dog can lead to your dog becoming stubborn to your instructions.

Always use simple words or hand gestures to assign tasks for your dogs to accomplish. Do not use more than one word or gesture for a single task. That can confuse your dog and it can result in the failure of the training. Always reward your dog when it obeys your command and punish when it disobeys. However, don’t ever be harsh on your dog.

The coat of the Blue Boston Terrier is smooth. It does not attract very much dirt. The grooming of the coat can wait up to a fortnight. However, it is good to brush the coat of your dog once or twice a week. Brushing the coat keeps the fleas, ticks and burrs away. Also, while brushing you can collect the loose hair and shedding.

You also need to arrange for a dog shower at least once a week if you want its coat to smell fragrant. However, a shower can wait up to as often as six weeks. Brushing the coat before showering can help in loosening the dirt. This way it is removed easily.

Colors of the Boston Terriers

A lilac Boston Terrier has a coat that displays a distinct purple or bluish hue that sometimes looks like a dusty red coat. The nose is not black but also displays a lilac hue as well. As they age, their coat also gets darker in color.

However, lilac Boston Terriers have unique eyes that are not at all lilac but bright blue in color. The blue color lasts for weeks until it changes to a crisp green color. However, after the puppy has grown into an adult dog, the eyes color changes finally to become amber.

A black and white Boston Terrier is the classic color in this breed. This is the one that resembles a tuxedo and is alternately referred to as the tuxedo dog.

A classic black and white Boston Terrier has a white blaze, a white muzzle and also a white forechest. The rest of the body is black. The forelegs, however, may be partially white.

Merle is sometimes also known as harlequin or dapple. There are several health risks attached to this dog. That is because the gene that produces Merle color is also responsible for eye and ear disorders in dogs.

Brindle is not a color but a pattern. This pattern occurs with a color. Brindle pattern can occur with black, dilute lilac and blue and brown coats. Brindles come in many shades from very light to extremely dark.

The standard brindle and white should be a black coat with a brindle pattern over the black color along with white markings. The white markings are found on, but are not restricted to, blaze between the eyes and the forechest.

American Kennel Club describes the seal as a black color when viewed without sunlight and when viewed in sunlight a seal has a red cast. The red hue is not visible as it may look like a dark brown or a medium brown because of the red undertones.

A red and white Boston Terrier comes in a red coat. The color variations may range from a copper color to a deeper red. The dog has usual white markings at the same spots. The white spots are found on the blaze between the eyes, at the muzzle and on the front chest. The eyes of these dogs are amber or hazel. The nose of these dogs is red.

The coat color of liver and white Boston Terriers is darker than the red with usual white markings. The coat appears dark brown. The usual white spots are on the blaze, muzzle and front chest. The forelegs can also be partially white.

There are many shades of fawn. From a light fawn that looks like champagne color to a darker fawn that looks like red, the shade variations of fawn Boston Terriers are many. The coat color is fawn with occasional white markings. A distinctive feature is that their coat has a combination of fawn and black hair. This variation gives it a boxer-like appearance.

While the coats of Boston Terriers are found in a wide variety of colors, they are not found in tricolor. There is no Blue Belton Boston Terrier. However, there is a blue belton English Setter that is known as the Gentleman of the world.

Pros and Cons of owning a Blue Boston Terrier