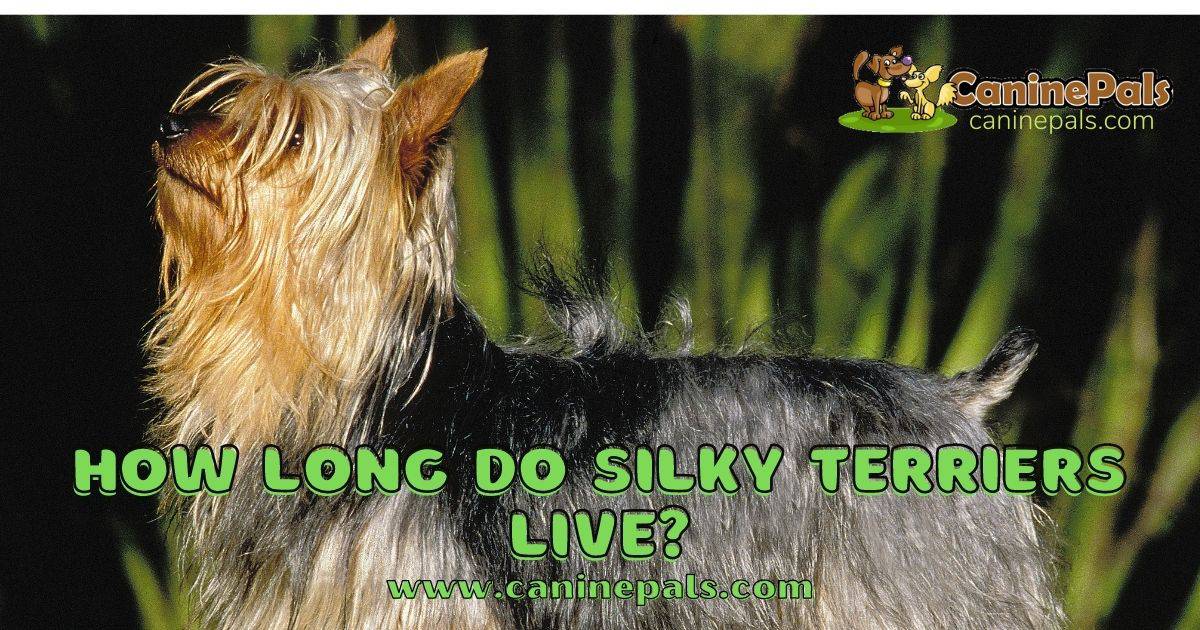 Small pointed ears that are set wide apart, round black eyes that are separated by a protruding nose that ends in a black tip, a tiny face, small mouth and a dog body covered with thick silky hair – here comes the lovely Silky Terrier.

How long do Silky Terriers live? Well, that depends on so many things. The health, food, exercise and many other factors determine the Silky Terrier life expectancy. No one would want to lose their cute, silky canine to absurd causes for this dog is too cute to lose.

How Long Does the Silky Terrier Live?

The Silky Terrier life expectancy is between 13 to 15 years.  This dog breed can live to its fullest given the right conditions, adequate exercise, required nutrition and beneficial environment.  The Silky Terrier is a healthy dog of small size.

Silky Terrier is a relatively small dog. AKC specifies that the height of both the male and the female ranges approximately from 9 to 10 inches. The weight of the breed is also quite less. On an average, an adult dog can weigh up to 10 pounds

If one thing draws everyone’s attention to this dog, it’s the coat of the Silky Terrier. Nature has blessed this dog with a beautiful coat. The coat can reach a length of 5 to 6 inches down. Long, sleek and silky, the coat is parted at the back of the dog.

The coat of the Silky Terrier comes in many colors. AKC recognizes six colors of the coat of Silky Terriers. These are listed below in the table along with the registration code.

It is referred to as the ‘toy terrier’ because of its small appearance. The dog is of moderate size and structure. The bones and body have significant strength that allow it the courage to hunt and kill domestic rodents.

The coat is silky, smooth and sleek. Parted sideways at the back, the coat runs from the neck to the tail. The body of the Silky Terrier is about one-fifth longer than its height at the withers. The build is light and the structure of the bones is fine.

The ears are set apart and come in the shape of an inverted V. They stand erect all the time and do not fall off. The teeth are strong and perfectly aligned. They are as sharp as scissors.

The shoulders are sloppy. However, the neck sits beautifully between the shoulders and looks perfect. The neck is medium long and fine. It is somewhat crested. Chest is wide enough and it extends to the elbows.

The body is low set. It is one-fifth longer than the height of the dog at the withers. Too long a body as well as a too short body is considered a serious fault in the Silky Terrier. The tail is set high and carried at twelve to two o’clock position.

The shoulders are laid back. There is a proper angulation at the upper arm which sets the forelegs perfectly under the body. Forelegs are strong, muscular, straight and fine boned. The front feet are small and catlike. The shape of the paws is round and compact and allows them to carry the weight of the body.

The thigh muscles are well developed. They are strong but not heavy. The feet are small, compact and round.

The gait is free. The dog should walk straight, lively and light footed. The power comes from the hindquarters that propel the dog forward when running. Toeing in or out is considered a fault.

Some dogs are aloof and want to stay laying in their bed all day long. However, the Silky Terrier is just the opposite. They love the attention of their owners. They want to be loved, cuddled and included in the home activity.

If you want a dog to keep around all day and help you around the house, Silky Terrier is the ideal one for this job. However, don’t expect them to be at home alone all day.

With children, their behavior is relatively good. However, they might hurt your child if left alone with them. Hence, it is necessary that the time with children is supervised by an adult.

With a thick and long coat, it appears as if the coat grooming requirements for Silky Terriers would be immense. However, it is exactly the opposite. It only needs coat brushing twice or thrice in a week. Because of the silky texture of its coat, brushing is easy and actually fun.

It is important to brush the coat of your Silky Terrier twice or thrice a week. Their coat is approximately five to six inches long. Due to which, dirt and tartar can build up. You also need to clean the coat from ticks, fleas and burrs that might cause disease.

Other than a weekly brushing, there is apparently no additional grooming requirement. The drooling level is low which means it is not one of those dogs you have to carry a towel around for cleaning.

Behavior with Strangers and Other Dogs

Silky Terrier is a loving dog. With family, it’s always lovey dovey. However, it is moderately playful and receptive towards strangers. It makes human friends very easily and enjoys a good time in their company.

The Silky Terrier is a small dog with a big, bold dog personality. It is playful and enjoys outdoor time. Although it has a small body yet it’s never lacking in courage. Silky Terrier would scare any intruder with its shrill barking.

The Silky Terrier also displays the general characteristics of a Terrier dog. Like other Terriers, it is often scrappy, energetic and lively. It loves to dig, bark and chase. These are the traits that are common to all the Terrier dogs. If you love the playful attitude of the dog, you would love to pet a Silky Terrier.

Since it is full of energy, it can never be left alone at home. It can easily get into accidents inside a home if left alone. Also, it is in their temperament to be together with the members of the human family. It is a loyal dog that needs attention, love and company.

The disease occurs early when the puppy is four to six months old. The disease can be corrected with surgery.

Epilepsy is a neurological condition that is mostly inherited. In epilepsy, dogs might experience fits of unusual behavior. At times, they might start running fanatically as it is being chased. At other times, they get unconscious with rigid limbs and fall down.

The seizures are painful for the dog. Contact a vet if your dog experiences any such symptoms. Get your dog thoroughly examined because other diseases might also lead to seizures.

It is a common problem in smaller dogs. In tracheal collapse, the cartilaginous pipe that transports oxygen to the lungs gets collapsed. The result is that the oxygen supply is cut off. The disease is quite common in smaller dogs and Silky Terriers are not immune.

The disease is curable. Contact your vet if your dog has a cough or develops intolerance to exercise because of exasperation. These are the common symptoms of tracheal collapse. Medication can help cure this disease.

Diabetes is a disease in which the body is unable to regulate the sugar levels. Excessive weight loss, frequent urination, thirst and increased appetite are the common symptoms related to Diabetes.

Diabetes needs to be controlled if the dog is diagnosed with it. Insulin administration and diet control are the two ways that help control diabetes in dogs.

Training the Silky Terriers requires patience, kindness and perseverance. It is a very sensitive dog breed and requires love and passion for training. Training yields best results if the Silky Terrier is treated with respect and patience. Rewards work best to encourage the dog to obey commands.

Silky Terriers are native to the land of Kangaroos – Australia. A cross was orchestrated in the 1890s between the imported Yorkshire Terrier and the native Australian Terrier. One of the many dogs produced as a result of this cross yielded the Silky Terriers of today.

However, the two documents marked deviation on the account of many traits especially the ear types and approximate weight. It led a compromise to draft the new breed standards in the year 1926 that were widely recognized in the country.

Being its recognized origin in Sydney, the dog was earlier known as Sydney Silky Terrier. In 1955, it came to be known as Australian Silky Terrier – a name that still retains the official status in Australia.

When the dog was introduced in the US, the name was changed to the Silky Terrier. The Silky Terrier was recognized as a breed by the American Kennel Club (AKC) in 1959.

Although he’s a Toy in size, he’s bigger and resembles the Australian Terrier if compared to the Yorkshire Terrier. He’s playful, friendly and energetic but is still tough enough to hunt and kill rodents. He hates being ignored so if he belongs to you, you must play with him a lot.

He loves playing fetch and walks. He needs to be brushed and bathed regularly. He’s 9 – 10 inches tall.

How long do Silky Terriers live depends on many factors. However, the Silky Terrier life expectancy is between 13 to 15 years on an average.

Silky Terrier is a loyal family companion. The breed was developed in Australia and later introduced to the rest of the world. The Silky Terrier is famous for its long shiny, smooth and silky coat. The coat can reach a length of 5 to 6 inches.

Although it might appear that the grooming requirements of this dog would be time taking, brushing this dog is fun because of the smooth coat that it has. Silky Terrier is a loyal companion, great partner as well as a protector.

If you want to own a playful and loving dog, Silky Terrier is the best choice for you.