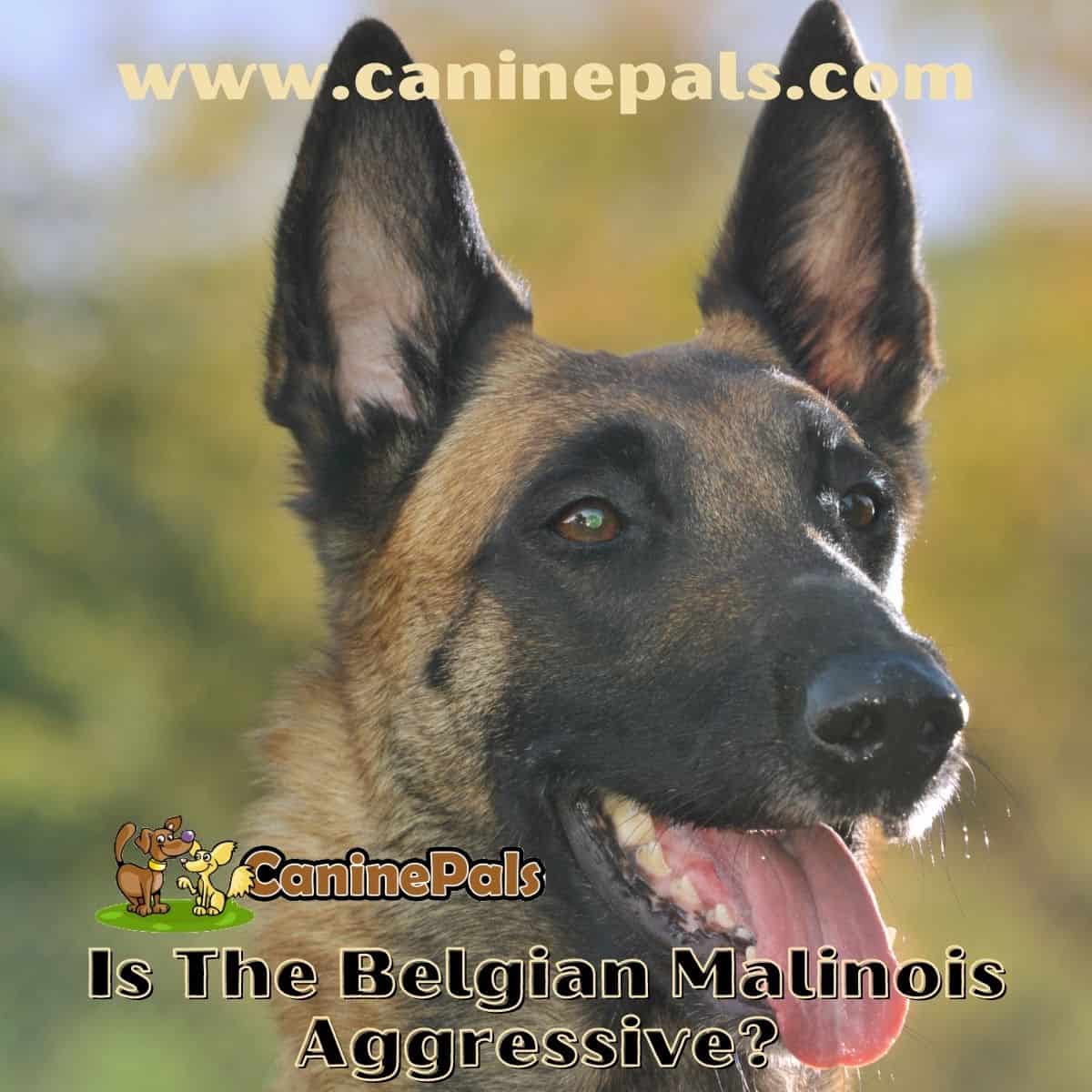 Is the Belgian Malinois dog aggressive or not? From their build to their needs, here’s a complete guide you need to see and learn about Belgian Malinois behavior and possible Malinois puppy aggression before buying one as a pet or a working companion.

When you are buying a dog, one of the most asked questions is regarding their aggression. People tend to avoid buying particularly aggressive dogs. So if you are planning to have this breed in your life, then you should know whether the is Belgian Malinois aggressive or not?

As initially bred as herding dogs, these Belgian Malinois dogs were meant to chase and defend their owner and their places; you would still find these aggressive traits in a Belgian Malinois. This breed doesn’t socialize much and needs the training to fix that they might growl and snap in fear or aggression when they see a stranger as they don’t like confronting unfamiliar faces.

Even with other dogs, they don’t get along instantly; you would have to take them to play dates a couple of times a week to make them welcome with other breeds.

This German Shepherd-type looking dog is also known as the Belgian Shepherd Dog or Belgian Sheepdog. Just like its name Malinois originated from the Malines region in Belgium. Belgian herding dogs come in four different varieties, including Groenendael, Tervuren, Laekenois, and Belgian Malinois as one of them. Belgian Malinois earned fame as a separate breed in 1959.

The Belgian herding dog or Belgian Shepherd Dog breed dates back to the 18th century, 1891, to be exact. The breed was becoming obsolete at the end of the 19th century and was on the verge of getting extinct when Professor Adolphe Reul formed a club called Club de Chien Berger Belge to save this type of breed. Along with his team, Professor Adolphe worked extensively to preserve this breed by standardizing them into distinct ranges.

Belgian Malinois gained massive popularity when they accompanied the Belgian Army in World war 1 to find wounded soldiers who went missing during the warfare. Belgian Malinois are pretty famous among Army Personnel for assisting them during wartimes and capturing criminals during the attack. They are used by security forces of various countries as detection dogs or assistant dogs in departments like customs, police forces, military, and border guards.

Belgian Malinois is the dog who got wounded while chasing the ISIS leader when he exploded himself with a suicide bomb. This Malinois named Cannon was honored as a national hero for his bravery, and it gave a boost to the demand for this breed.

They are high-energy, intelligent, and very active dogs. The Belgian Malinois dog is usually intelligent, has an athletic build, and is a very muscular dog breed. They can be great pets since they are very watchful, alert, and protective.

This dog breed is extremely energetic, and they are not given enough time to exercise and play. They might develop habits like separation anxiety, excessive barking, and chewing due to boredom.
Belgian Malinois were initially bred as herding dogs.

Their trainability and persistence made these dogs one of the finest to assist as police and military dogs. They tend to learn new skills very quickly; they are very eager to respond to their masters, which makes them suitable for rescue operations, bomb detection, and drug-sniffing.

This breed is famous for its strong prey drive, making them aggressive and dangerous for other dogs, other pets, and young kids at home. They get really aggressive when they are not exercised which makes them not much suitable for a home environment where the owner works for long hours.

Is The Belgian Malinois Dangerous?

They are extremely playful and can’t do well in boredom. All these things play a key role in making a Belgian Malinois aggressive. Belgian Malinois aggression is something that makes it difficult to live with other animals, especially with non-canine animals. They should be kept separated by a fence from other animals to avoid any mishap. However, they can do well in the home as pets if trained properly.

Puppy kindergarten and obedience training classes are great for Belgian Malinois as puppies. If they are not properly trained as puppies, then they can be dangerous and even aggressive towards humans and other dogs. They also don’t get along with strangers easily.

It’s imperative to make these puppies socialize from an early age. It would help them to welcome unfamiliar faces and dogs; this age is also the time when you would notice aggressive tendencies in this breed.

Belgian Malinois is generally considered the best dog breed as guard and protector and is primarily known as a proactive working dog. They are highly skilled dogs with a greater instinct which makes them the most celebrated police dogs in the world. Most of the security personnel around the world are keen to have Belgian Malinois onboard for rescue projects.

Can a Malinois be a Good Pet?

If this breed is given a suitable environment, they can be great family pets as they are known as protective dogs, loveable, devoted, and loyal. As we have discussed earlier, a Belgian Malinois temperament requires a committed training plan and strenuous exercises.

If they are not provided with these things at home, then they can get bored and will become very challenging to handle. Although they are one of the most desirable pets, first-time dog owners must know one thing: Malinois are intense dogs, and they need a lot of attention and care, so they are not recommended as family pets.

However, if they are trained well, they can be very playful and love taking part in family activities. They can assist you in any of the outdoor chores as they love playing and doing outside activities.

If you are going to own a dog for the first time, then this breed is not suitable for you as they are pretty active dogs and want proper care to play and exercise. These exercises and training cannot be done in confined places like apartments, so they need open places with a play yard to live in a home environment.

Belgian Malinois are mid-sized to large dogs with moderate weight. They are usually fawn to mahogany in color with a black overlay and face mask. They are square proportioned dogs with oval-shaped bones and powerful bodies, which give them an impressive stature.

This breed has double-coats with dense undercoats to resist the rainy climate of their origin country Belgium. They are sharp and are able to read the smallest of movements and facial expressions. A Belgian Malinois is a shedder; it sheds only twice a year but sheds heavily.

These dogs are generally 22 to 26 inches tall, the male breed is 24 to 26 inches long, and females are 22 to 24 inches tall. A Belgian Malinois dog’s weight varies from 40 to 80 pounds in males and females, respectively, which makes them 18 to 27 kilograms.

How Long does a Belgian Malinois Live?

The Belgian Malinois lives a healthy and longer life compared to the other mid-sized dogs. They live an average life of 10 to 12 years. Some lucky and healthy ones may live a couple of more years.

Malinois are usually healthy dogs, but like other dog breeds, they are also prone to some health issues. Following are the diseases that are common in this breed.

This is a very common health condition in this breed in which the dogs lose the photoreceptors present in the back of the eyes, due to which they may face blindness. It is a degenerative eye disorder that happens due to aging and results in damaging central vision. The good part is that dogs have pretty strong other senses, which help them live a happy life even with blindness.

This is also a common health issue in mid-sized and large dog breeds. This is caused by the abnormal formation of the three bones that makes elbow joints in the dogs, which results in restlessness and severe pain. Your Malinois may lose movement due to pain if they are not suggested medication for pain reduction. However, this is a curable condition that can be cured by surgery.

Just like most mid-sized dogs, Hip dysplasia is a common health condition in Malinois as well. It is a heritable condition; the dogs with hip dysplasia face constant discomfort, which results in lameness and excruciating pain. This is a condition when the thigh bone does not fit properly in the hip socket; this may also develop arthritis in the dogs as they age.

Obesity in Belgian Malinois is one significant health condition. The excessive weight gain in Malinois triggers more diseases in this breed like severe joint issues, digestive and metabolic disorders, heart diseases, and back pain. So as a caregiver, you are suggested not to give more than the diet which is appropriate for your Malinois. Maintaining discipline while feeding them is very important as it reduces the chance of becoming obese.

The Belgian Malinois is usually a low-maintenance breed; it does not require much grooming. However, they should be bathed as frequently as once a week.

To maintain their healthy skin and coats, frequent brushing is also suggested, but during the shedding season, the brushing of a Malinois should be a daily ritual. As Malinois is a double-coated breed and has dense undercoats, it is recommended to brush them with a dryer to remove dirt and grime before taking them to bathe.

Nail trimming, ear cleaning, and proper nail care are also suggested for these dogs once a week for a healthy routine.

Maintaining healthy dental hygiene is also essential for this breed; they need to be brushed at least 2 to 3 times a week with canine toothpaste as human toothpaste can be harmful to them if they swallow it.

This most desirable and extremely attractive dog is an expensive breed. An active Malinois can cost you as much as $3500 to $9000, as the purebred dog is usually worth more. It also depends on the availability of the breed in the vicinity.

A Belgian Malinois may cost more in the USA as compared to its native country Belgium. A puppy of this breed may cost you around $2500 to $3000.

The price of this dog depends completely on its lineage and training. However, the adult and fully trained Malinois can range up from a whopping $45000 to $65000 because these dogs are known as national heroes.

Belgian Malinois are beautiful herding dogs; they are extremely energetic and friendly if they are given proper socialization training at a young age. A properly socialized Belgian Malinois is a joy to own. They can be great pets also due to their brilliant watchdog skills and their loyalty and protectiveness.

However, if they are not trained well at an early age and introduced to different people, other dogs, and animals, then it can get difficult for you to keep this breed at home. You should only purchase a Malinois if you are one of those individuals who are experienced in dealing with such dogs who crave activities and can invest significant amounts of time in providing them with such exercises.