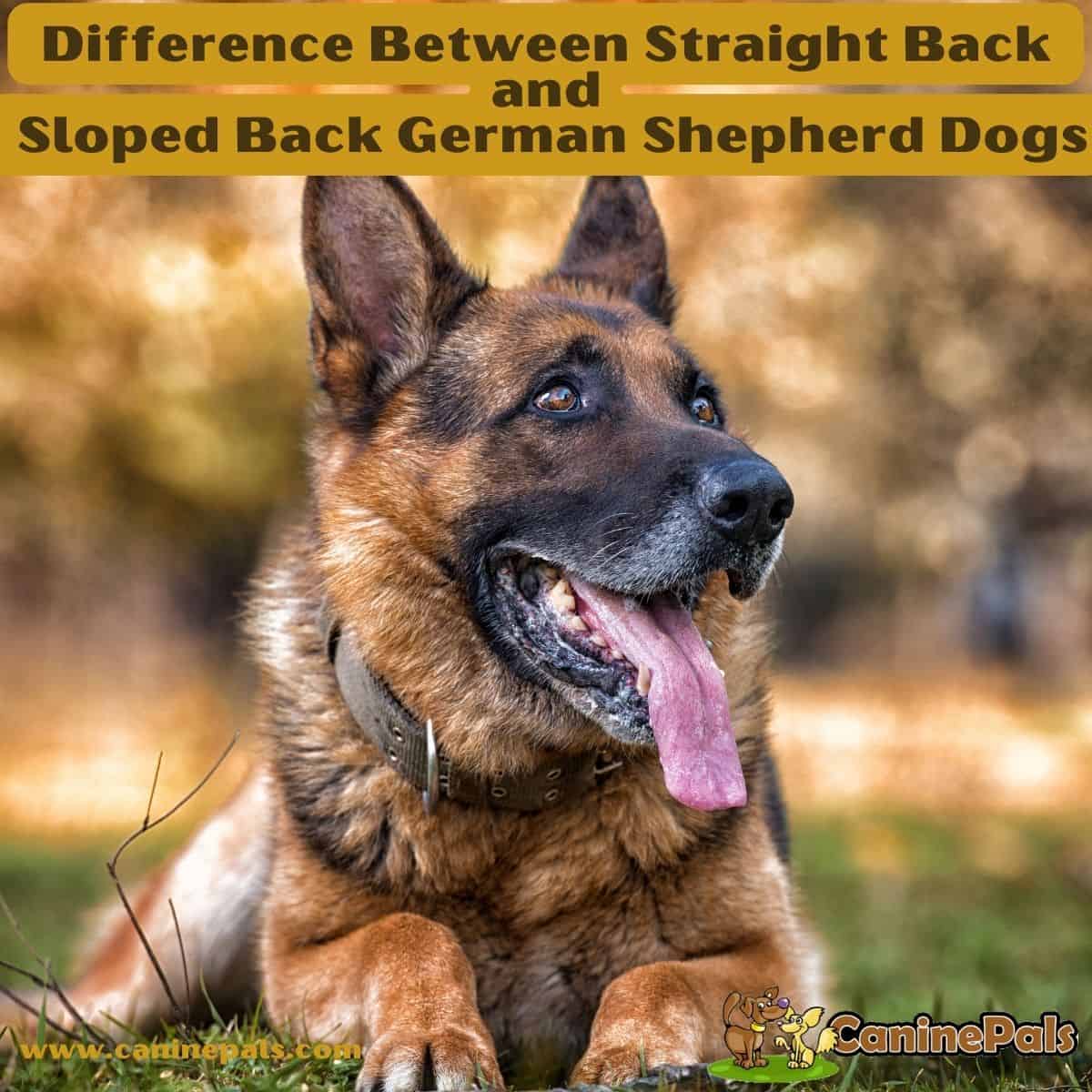 If you ever think of getting a German Shepherd, what’s the first thing that comes to your mind? Yes, A sturdy, active, and very functional dog.

German Shepherds are amongst the most desirable dog breeds in America for very good reasons. This breed of working dog is wise, courageous, and amazingly versatile. What’s there not to admire?

The bushy-haired friendly fellow is in great demand as a companion dog. Many of us wish to have one as a family pet because of this pooch’s unmatched loyalty.

If you are also an admirer of this breed, there are chances you have a hint of the difference between straight-back and sloped-back German Shepherds.

But the question is what makes a sloped-back German Shepherd different than straight-back GSDS?

Well, getting an answer to this question is important to find a great fit for your household. This article will cover the original breed standard and major distinctions between sloped-back and straight-back German Shepherds. Dive in to find yourself a perfect furry little pup!

What is the Difference Between Straight Back and Sloped Back German Shepherd Dogs:

Although many reliable breeders tried to keep this breed’s original capabilities, others focused on developing a more physically attractive dog. These different breeding objectives created a division within the German Shepherd dog breed. This majestic breed has undergone a series of transformations.

So, to find out which one is the best option for you to go, let’s have a look at the old-fashioned German Shepherd.

In Great Britain, German Shepherds are famous as Alsatians. This canine is one of the world’s most recognizable dogs.

Also, it is amongst the top 10 most famous dogs in the US. This pure breed has a reputable background as a working line service dog. Their services for handicapped, military, and police departments are remarkable.

In the late 19th century, some influential breeders aimed to polish the German Shepherd with their breeding program. The purpose was to create a physically attractive and superior-looking animal. Any dog that appeared in those breeding records is referred to as a German Shepherd, while the rest are known as old German Shepherds.

The old German Shepherds are technically the dogs that served in German farms for hundreds of years as herding dogs. Their ability to work alone, obedience, intelligence, and great stamina was what made people fall for them.

Old German Shepherds were never modified to look a certain way. Therefore, no true breed standard exists for them. They have a medium to large sturdy build measuring between 55 to 65 CM.

An old German Shepherd’s weight lies between 20 to 40 kilograms, depending on the health condition and age. Their coat usually tends to be long and comes in a series of colors, including black, grey, brown, or a combination of any of the two colors mentioned above.

This hard-working dog may show his independent side at times. These fellows are constantly alert, making them great watchdogs. Old German Shepherds tend to warn their loved ones about any incoming visitor.

The loyal canine forms a strong bond with family members and can be very protective of them. Early socialization of puppies can help them integrate with other pets and children. Some people believe that their personality is a little aloof, but the pooch is not an aggressive pet.

It’s good to know that these dogs are not ideal for dealing with separation anxiety. It would be best if you kept them busy doing something to save them away from boredom.

As stated earlier, due to their high potential, old German Shepherd dogs were in demand for herding purposes, so the breed has a high exercise requirement. They need long exercise walks and work to release their daily energy.

Due to their intellect, they excel in many physical activities such as flyball, agility, and obedience. Plus, the pup needs a lot of physical and mental stimulation.

Old German Shepherds are well-known for their gifted intellect. With positive training sessions and proper guidance, they can learn to perform multiple high-standard tasks.

Old German Shepherd needs an interesting and consistent training session along with firm guidance to keep them happy and energetic.

Difference Between Straight Back and Sloped Back German Shepherd Dog

The sloped backs come into sight in the early 1900s. To date, it’s not obvious what made this breeding so popular, but influential breeders highly promoted it. People started liking the new curved back posture of German Shepherds, and rest, you know.

These little bodyguards fall into two breeding types. The first one we have is the working line, and the second one is the show line. The breed type depends on the location and appearance of your dog’s back.

A straight-back German Shepherd dog has a moderately long, straight, and strongly leveled back. Their body structure assists them in performing their responsibilities as herding dogs.

Plus, having a straight back helps the dog turn and protect its herd smoothly and quickly. A German Shepherd with a straight back is from the working line dogs of this breed.

Not all, but some German Shepherds have sloped backs. These canines have a curvy structure with hips and knees close to the ground, giving the dog an angulated appearance.

Why are German Shepherds Back’s Sloped?

Today’s German Shepherd dogs are way more evolved than the original, or some say the old-fashioned German Shepherd breed. The evolution of this athletic-built dog has resulted in several bloodline changes.

Changes made to this pooch were rapid. Breeders of that time started to create a more attractive-looking version of the German Shepherd right after their introduction to the modern world.

Unfortunately, most of the breeders were only concerned about the canine’s physical perfection rather than health concerns. They came up with the breeding idea of a German Shepherd with a sloped back and bouncy moments. This urge of breeders led them to sloped back GSDS.

Initially, this concept of having a dog with a sloped back, hind legs, more force in gait, and better functionality became very famous. Many pet lovers started adopting this breed as companion dogs. Plus, they were great at house protection.

The sudden spike in this intellectual fur baby’s popularity resulted in some negative consequences. Breeding anomalies started to get out of hand when a few breeders took the sloped back concept to an extreme limit, causing severe damage to the breed’s health.

The sloped back of your German Shepherd baby might look really cute to you but can have a greater effect on your dog’s overall health. The curved back makes the dog’s hip and knee come closer to the ground making the fur ball’s hindquarters look way more angulated.

You may also refer to this situation as bent legs. Pet owners and the dog himself might not feel any discomfort during the early years of his life. (Except for some shuffling every once in a while). But as the years pass, the pup becomes prone to serious health concerns that can harm his life quality. Puppy buyers should ask to see the results of health testing for the parents of any puppy they are purchasing.

Some of the most usual problems that can discomfort your sloped back fella are listed below:

Due to the fact that the sloped back German Shepherd’s hips and knees are closer to the ground, they need to stretch their back whenever they walk or run.

You may also feel your German canine is using his hooks to stand up or walk. This tendency may cause lower back pain, fatigue, cartilage, and joint distress.

Hip Dysplasia is a severe health condition common in both the straight-back and sloped-back German Shepherd community. It is a skeletal condition that causes your puppy extreme discomfort and pain.

Although any dog can be a victim of this disease, bent-leg canines are more vulnerable to hip dysplasia. No doubt, excessive growth rate, improper nutrition, and genetics play a key role in developing hip dysplasia, yet poor breeding standards and bent legs are not free from the blame!

This health concern is irreversible. During the early stages, some dogs may feel better with a few doses of antibiotic medications. We wish this for all dogs, but hip replacement is the only option recommended by veterinarians in severe cases.

Osteoarthritis, also referred to as DJD (degenerative joint disease), is a progressive condition that usually occurs in senior and large breed dogs. Sloped back pups have a tendency to get this progressive inflammation of the joint.

The deterioration of cartilage causes osteoarthritis, and it further leads to pain, inflammation, and the development of bone spurs. While any joint in your friend’s body can develop this, the condition mostly affects the lower spine.

Sad to say, no cure for this progressive disease is available at the moment. Prevention through diet, regular walks, exercise, protective supplements, and regular veterinary checkups are the best way to keep the adorable furry fellow away from joint troubles.

Treat him precious and feed him healthy because the little pal is Super Special. Right?

A Sincere Note to the Pet Lovers!

We have tried much to list all the troubles your lovely pal may encounter. The goal is to give you an idea of mild to severe health concerns you may not have heard of.

If your sweet mate show’s any signs of distress without referring to any “Effective Homemade tricks,” we recommend consulting a qualified vet to get to the root of the problem.

So, Which One Should I Get?

To be fair, the answer depends on your choice and lifestyle.

The reason is pretty simple. Straight-back German shepherds are more active, and agile, and don’t face a lot of health issues. Think about it; is it fair to breed a dog with severe health conditions just because we love the modified look?

Wrapping Up: Difference Between Straight Back and Sloped Back German Shepherd Dogs

Other than the straight versus sloped back debate, there is way more to this impressive dog breed. Choosing a dog should always depend on the new owner’s capability rather than the ever-changing pet trends.

No matter what dog or breed you prefer, the canine’s breed welfare is something that counts the most.

Whether you choose a slope-back or straight-back German Shepherd puppy, your unconditional love, proper care, and maintenance will determine how liable you are.

If you know what you want, just visit a reputable breeder and let them help you make an unbiased decision!