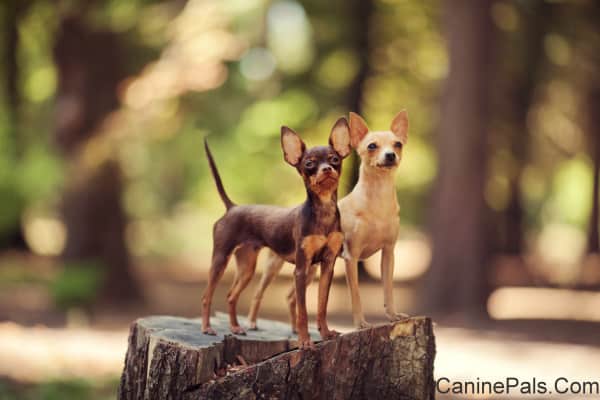 This post is about the Russian Toy Terrier, a small dog with an adorable face. This breed of terrier was developed in Russia, and its most common color is black and tan. If you’re considering getting this type of dog for yourself or your family, then check out these interesting facts about them.

This Russian toy dog breed came close to being wiped out twice. The first time was during the 1920s during the Communism era because he has strong ties to the aristocracy. The second time was because of the influx of foreign breeds once the Iron Curtain fell.

Let’s have a look at some vital stats of the Russian Toy Terrier:

A small, elegant dog that is lively and active. These dogs have a keen intelligence with their aloofness towards strangers but are neither coward nor aggressive.
A perfect companion for your day-to-day activities.

The Russian Toy is one of the world’s smallest dog breeds and measures 20-28 cm and weighs 1-3 kgs. Its distinctive small head has triangle ears and large eyes. In the countries that have banned docking, this dog’s tail is curved like a sickle.

A Russian Toy Terrier is a square dog; it has an equal height from withers to the point at the hip. The head is small compared to the body. It has an alert and attentive expression with dark eyes. Ears are big, thin, and set high. They’re also erect with a wider base tapering down to a triangular shape.

Both varieties of this dog can be crossed so one litter may have long and smooth-coated puppies. There have been times when two dogs with smooth coats have been bred and a Russian toy terrier’s long hair offspring is born from that unity. This only happens if the long hair gene is part of their pedigrees. However, the reverse hasn’t been known to occur.

The Russian Toy has four main colors: solid red of differing shades, brown and tan, blue and tan, or black and tan. The red color includes red sable (red with an overlay of brown) and sable (red but the hair tips are black (overlay).

There are two types of coat types in this dog breed, smooth-coated and long-haired. A smooth coat dog has short, close-lying hair that is shiny and without an undercoat.

How much your Russian Toy’s coat grows can be influenced by diet, genetics, age, hormones, and even the climate where he lives. Puppies usually lose most of their coat when they’re between the ages of 5 and 12 months of age. The full coat may not exist until the dog is aged between 2 and 3 years old.

The females can lose most of their coat once their season has passed. Therefore, an intact female’s coat won’t be as much as a spayed female or that of a male.

A vet is often needed if “baby/puppy teeth” have to be removed. If this isn’t done (generally under an anesthetic) both baby and adult teeth will try to occupy the same jaw socket. This can cause gingivitis, tar deposits, periodontitis, and tooth decay. These problems can lead to teeth being lost prematurely.

Russian Toys can easily have fractured bones because they’re so small and somewhat delicate. They can suffer from patella luxation, where the knee cap slides out of place when the knee bends because the groove that’s supposed to hold it firmly in position isn’t deep enough. Patella luxation can be a genetic and/or environmental problem.

The tracheas and necks of smaller dogs are far more fragile than larger, more sturdy dogs. The ideal way to take him for a walk is by using a leash that gets attached to a harness (not a collar).

Never leave a harness or collar on him while he’s at home. It’s common for one or the other to get caught on different things in the home that can yank him by the neck, potentially causing a great deal of harm.

The Russkiy Toy Terrier is an energetic and loyal breed of dog. They are known for their kindness, intelligence, loyalty to family members, or the owner’s command.

This small dog has a cheerful, active temperament and can become very attached to his family, regardless of the ages of each family member. He’s very reserved around strangers and demonstrates powerful loyalty to his owners. Originally he was bred as a watchdog and rat dog. The watchdog trait is still quite distinct and, although he’s small, he can be very vocal and protective if danger to his family is perceived.

The Russian Toy Terrier dog is ideal for people living in smaller spaces because of its size and temperament. He’s good-natured and great with families, including young children. However, as with all breeds, do your homework before taking one home to meet the family.

When you consider the attitudes of these dogs, you’ll find the Smooth Coats tend to be a little more like a terrier, as compared to the Long Coats. However, both types have very big personalities.

A Russian Toy has a life expectancy of about 10 to 12 years, but it is not unheard of for some of these dogs to reach their late teens.

The RTCA (Russian Toy Terrier Club of America) strongly recommends that you get your puppy involved in socialization as early as possible. This should help your Russian Toy puppy become a valued, well-behaved part of the local community.

Many kennel clubs that accept all breeds, vets, and community centers provide kindergarten classes for puppies and numerous stages of obedience training. All owners of Russian Toy dogs are encouraged to train their dogs to become the best possible dogs possible.

A Russian Toy Terrier is a small, yet sturdy dog with an outgoing personality. They are playful and love to be around their family members as much as possible. However, they can also be stubborn at times so it’s important not to use harsh training methods on this breed of terrier. If you’re considering adopting one of these dogs or already own one, here are some things that owners need to know about the Russian Toy Terrier in order for them to live happily ever after!