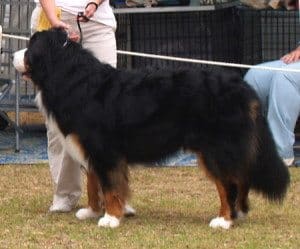 The Bernese Mountain Dog is among the four types of Swiss Mountain dogs but is the only one with a silky, long coat. He thrives in the cold, mountainous weather where he comes from and was originally named after the Canton of Bern. These dogs were used on farms for herding cattle, pulling carts and being a family companion. He performs in events including: obedience, tracking, agility, conformation, therapy, herding and carting.

His tri-colours are white, rust and black, like other Swiss dogs. He needs a fair amount of exercise and, because he sheds, he also needs regular brushing. As an easy-going, calm dog, he’s very good for families as he feels the strong urge to be with people and is happiest that way. He stands 23 – 27.5 inches high.