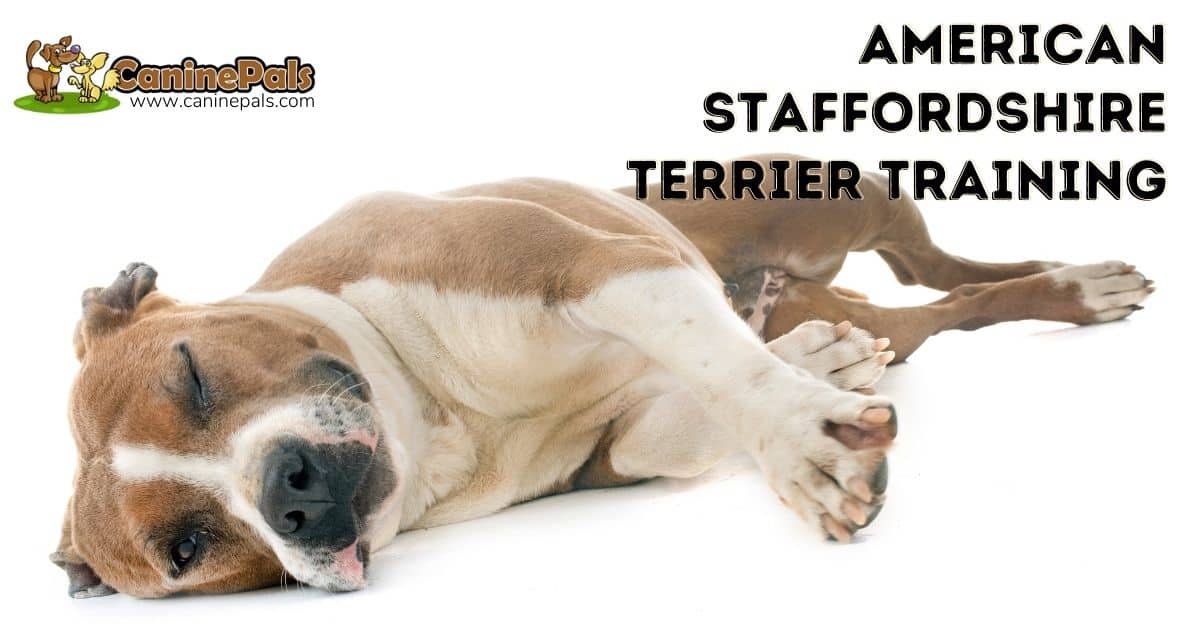 American Staffordshire Terrier is a celebrated family dog. It is a much loved dog because of the character and personality traits possessed by this breed. Loyalty to the owner, friendliness with all the members of the family, trust, playfulness, agility and the traits to stand as a guard are some of its outstanding characteristics.

But these traits do not come on their own. For it takes a skilful trainer to tame and civilize this dog. In this article, we are going to delve deeply into the details of what it takes for American Staffordshire Terrier training.

We are going to talk about how difficult or easy it is to tame it; what should we expect from a trainer; and we will also see what to do if a Staffordshire Terrier misbehaves while in family.

So, brace yourself and let’s start American Staffordshire Terrier training!

They loved dogs fighting dogs or dogs fighting bulls. Sometimes a dog was used as an aid in a wild boar hunting expedition. The blood sports used to be the famous spectator sports of those times.

Interested people were so consumed by these blood sports that they used to think of ingenious ways and wild breeds to win such sports. This led people into experimenting with the dog species. And one such experiment yielded the much loved American Staffordshire Terrier of today.

Training a dog is a difficult thing. It needs special care and attention. It is not just about teaching your dog how to behave. It is much more than that. It also includes how you want your dog to live with you.

Dogs are animals after all. Your each act or each omission is a signal to them. They carefully watch you and read your signals. What you allow your dog to do and what you disallow are all signals. These are messages to your dog.

Like all the other messages we send in our daily lives, if we are sending the right signals and delivering the right messages, the reply would be positive. If the messages and signals are wrong, the dog would behave badly and might act rogue.

Other than that, it can be a trustable and good family dog if it is trained well. In this section, we are going to talk about the dos and don’ts of American Staffordshire Terrier training.

It is a pack animal. In the pack, animals behave fiercely towards other animals. The gene pool ingrains certain character traits in dogs. If anyone needs to pet a dog, the training must begin at a very tender age when it has not socialized with its own species freely.

The other important thing to note is that the Staffordshire Terrier is bodily muscular and temperamentally aggressive. It is necessary that the aggression is ended before petting it.

The Staffordshire Terrier feels threatening to children. So, it becomes extremely important that training should start early. The dog should spend time with the children as a puppy. In this way, it would feel comfortable around them.

Lastly, this breed feels insecure from other dogs and comes with an attacking mentality. It attacks not to defend itself but to disarm and kill the opponent. Early socialization and nearness to other pet dogs can bring a massive behavioral change in this regard as well.

Positive reinforcements make it easy for your dog to understand what it is expected to do. Remember that AmStaff is an intelligent dog and this technique works best in its case. The reward can be given in the form of something to eat, a cuddle or a verbal praise.

If you are using verbal praise, be sure to appreciate your dog properly. Dogs get happy when they are praised. It is extremely necessary that you let your dog know that you are happy with its actions.

● Defining a Task for Your Dog

It is extremely important that you define carefully and elaborately the task for your dog. If the dog knows what is expected of it, it can diligently accomplish the task earning reward from the trainer. If the task is defined in an absurd manner, it is next to impossible for the dog to make sense of the task and to accomplish it.

In order to carefully and completely convey the message to the dog, certain techniques are used. For example, you can use a particular word to let your dog know what you expect of him. Assign only one word to each task. That way whenever you would utter that word, the dog would know what you are commanding.

Never use a different word each time for a task. That way, your dog would get confused. Hand gestures can also be used to help the dog. For example you can indicate the dog to sit by using the gesture of your hand commanding it to sit. You can call the dog by making gestures calling it to you.

● Tell Your Dog Who is The Leader

It has repeatedly been mentioned that dogs are pack animals. And once you own it as a pet, it considers your family its pack.

In a pack of dogs, there is only one leader that is an alpha dog. In the family, that alpha person should be you. The dog must know that you are the leader of the pack. It is extremely important that you establish your leadership.

The leadership can be established in multiple ways. Firstly, you should keep the dog on a leash. Let it know that you are the one who holds its leash and that you are the leader. Alternatively, you can let other members of your family hold the dog’s leash so that it must know the hierarchy of its pack.

Food is important for dogs. Dogs note who is giving them food. You should personally take this responsibility. Giving it food is the most critical moment when you can assert your leadership. While serving, let your dog stand and wait. Don’t let it start eating until you are finished.

● Socialization With Other Pets

Bull Terriers, like AmStaff, are agile, muscular and full of energy. Just like AmStaff, they are intelligent and this characteristic makes them highly trainable. The underlying technique used to train Bull Terrier is the use of positive reinforcements. Since it is intelligent, it responds very well to the rewards and punishments. Offer a reward in the form of a cuddle, pat or something to eat if it obeys your command and punish if it disobeys.

If the dog is an offspring of a pet dog, the training becomes easy. If the dog comes from outside, it may find it difficult to live among its human pack. In that case, establishing leadership becomes necessary. Teach your dog that you are the leader of its new pack. All the time it needs your invitation or acquiescence.

Adult Bull Terriers occasionally chew stuff around them. You should teach them not to damage things around. You can also get them a chewable dog toy.

Training a puppy is similar to training an adult dog. Puppies however have different needs and require different training. The first thing that you need to train your puppy about is using the toilet. You must not allow it to do it inside the house. If you are keeping the dog inside a crate, let it out regularly after intervals.

The dogs have this tendency to keep the sleeping area clean. Even if it accidently messes inside the crate, it would develop issues and all the training would need to be restarted. The bladder in puppies is weak. Adult dogs can hold their bowels for a long time while puppies are in the process of developing this ability. Hence, it is necessary that you take them out of the crate. Working a routine is even better.

Puppies have the habit of chewing things. It is their way of exploring their new world. Be a step ahead and protect those things that can be damaged. Same as humans, dogs shed the first pair of their teeth. These are then replaced by the adult pair. During this time, it is natural for your dog to excessively chew stuff.

Puppy dogs develop separation anxiety. Just as a human child does not want his parents to leave, the same goes for the puppy. The puppy has no parents or siblings. You are his family now. So, don’t let separation anxiety develop in him.

American Staffordshire Terrier is a muscular, agile and fast dog. It is full of energy and enthusiasm. And because of these outstanding characteristics, it can be a good agility dog. Agility training for a dog requires patience. It takes time and effort. The dog is allowed to get to know the obstacles that it needs to clear.

Because of the physical strength and intelligence, it is expected of a Staffordshire Terrier to perform well during agility training but there is a big problem when it comes to its agility training. AmStaff has no respect for the agility equipment. They blast the equipment and give the trainer a very hard time.

American Staffordshire Terrier training takes patience, skill and time. The AmStaff is an intelligent dog making it trainable. Early socialization is necessary so that the dog has a higher tendency to be able to quickly learn skills required of a family dog. Define the task to your dog in a clear and lucid manner. Use positive reinforcements to train your dog.

Always assume the leadership position and let your dog understand it completely that you are the leader. AmStaff has difficulty getting along with other dogs. Early socialization might help your dog.

American Staffordshire Terrier is an agility dog and the breed is competing in agility all around the world.