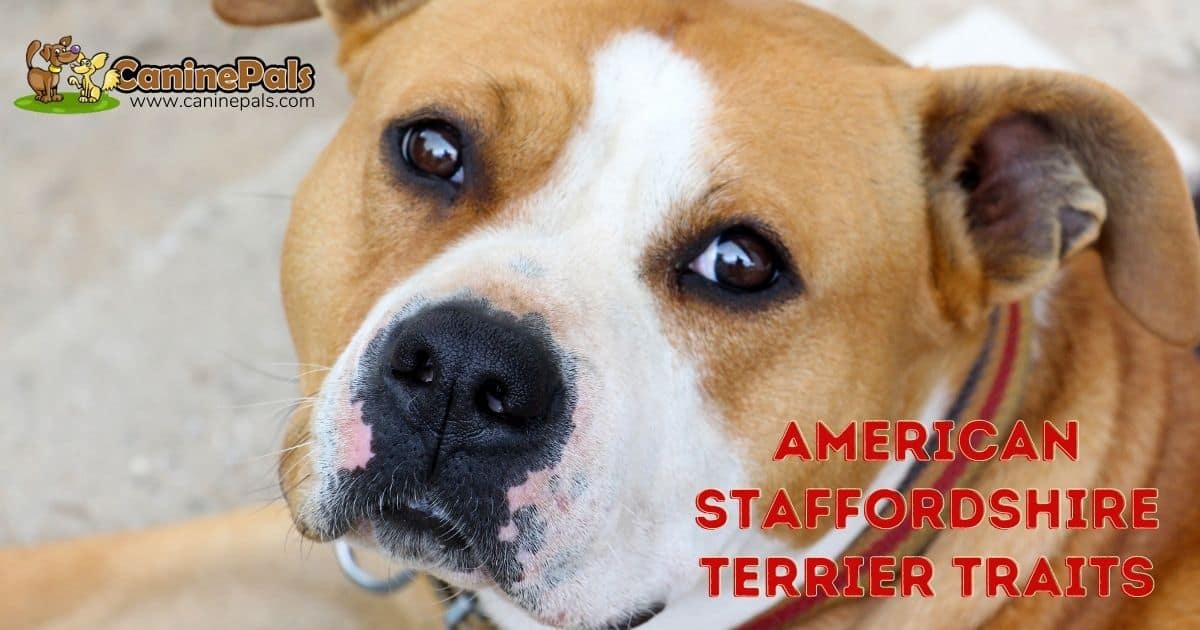 This article is going to be all about American Staffordshire Terrier’s outstanding traits. So, brace yourself for all that is yet to come.

The American Staffordshire Terrier is intelligent and athletic which means he’s suitable for dog sports including agility, obedience, conformation and tracking. You can recognise him by his powerful head and stocky body. His coat is short and can be any color. It can be patched, solid or parti-coloured. This dog used to be known as a Pit Dog, a Half and Half or a Bull-and-Terrier dog before the English decided this was a better name in the early 19th century.

This dog loves being with people and is very loyal. He’s also friendly but will protect the household from trouble when necessary. His coat is easy to maintain but he does need regular training and exercise. His height is 17-19 inches tall.

American Staffordshire Terrier originally hails from England. This dog breed was raised for a specific purpose. Back in the eighteenth and nineteenth century, Englishmen were fond of blood sports. These included dog fights, turning a pack of dogs loose on a stacked bear or a bull. In those days, spectators were fond of blood sports. They used to bet on the outcome to make money.

Those days of grisly blood sports are long gone. But the blood sports gave us an outstanding breed – our very own American Staffordshire terrier.

The dog was introduced to the US in the mid-eighteenth century where it was loved and used as farm help or to hunt down wild boars.

Because of their lineage and history, people are quite concerned about this dog breed. But worry not for we are going to present in detail all the necessary traits of Staffordshire Terrier in considerable detail.

The Staffordshire Terrier is a muscular dog that is strong for its size. They look agile and active. The bone structure of the face is well defined and the overall appearance is attractive. The jaws are strong and the eyes round. Sometimes you would see their cute puppy dog face while looking at the humans. At other times, they would appear the master of the ring when at large.

American Staffordshire Terrier is a medium-sized dog that ranges between 17 to 19 inches in height. The height of the male dog is an inch longer in comparison to the female dog. The weight ranges from as low as 40 pounds to as high as 70 pounds. The female dogs are relatively smarter than their male counterparts.

The exact height and weight range of American Staffordshire Terriers according to the American Kennel Club (AKC) is given below in the table.

The appearance leads to a perceived notion about American Staffordshire Terrier personality that they are aggressive. But the reality is completely different.

The most important concern about any dog is whether it is a good family dog or not. In that regard, you can completely trust AmStaff. It is a well-behaved family dog.

The Terrier is fond of humans and loves nothing more than to be useful to humans. It is a happy family dog through and through. It loves to play around. When in an outdoor setting, it is in full action such as in the backyard or on a lawn. It is loyal to its owners and loves to be around them.

AmStaff is generally good with children but tends to be relatively overprotective. Hence, it is highly advised that the dog should be allowed to bond with the children but not without supervision. These dogs are also very gentle and friendly towards strangers and mingle well with them.

AmStaff has a past of being a dog that was employed in blood sports. The appearance, size and personality display certain features that make Staffordshire Terriers a relatively aggressive breed. AmStaff has a reputation for being the guard dog. The most notable of these guard dogs was Stubby who earned a rank of a Sergeant and earned decorations in World War I. Some dog owners have reportedly claimed that Terriers are a good judge of human intentions and can satisfactorily perform the guard duties.

Considering these characteristics, AmStaff can come as an aggressive dog. But if this dog starts training early, the aggression is taken out of its personality. If it finds a trainer that can take care of its physical demands, it turns out to be a pretty well-tamed dog.

Terrier is an intense dog and likes to stay busy. AmStaff would pull, dig, chew and occasionally bark when it is bored. Sometimes AmStaff becomes a pain to handle while on a walk because they would pull the walker along with them. So, it is extremely necessary not to let the dog take charge.

Also, they may not be as friendly towards other dogs as they are to humans.  These dogs respond well to training but can be very stubborn to the forceful methods. So, it is highly advised that they be trained in an understanding manner.

Overall, American Staffordshire Terrier is not an aggressive breed if it is trained and handled well.

If we were to sum up all the American Staffordshire Terrier personality traits, we would say that they are loyal and friendly, loveable and loving, kind to children but a bit overprotective, responsive to training.

The table below summarizes the personality and traits of American Staffordshire Terrier. The more the score out of five, the better this dog is in that regard.

American Kennel Club (AKC) describes official breed standards for American Staffordshire Terriers. These standards are being described below in detail.

AmStaff and APBT are so similar that it gets very difficult to find any difference between the two. Both these terriers were first bred in the British Isles from where they were brought into America.

Apparently, APBT is smaller and leaner in size and form in comparison to AmStaff. The height of AmStaff ranges from 17 to 19 inches with an approximate weight of 50 pounds. On the other hand, APBT reaches a height of 18 to 22 inches with a weight of 30 to 60 pounds.

Another apparent difference is that AmStaff has a short, dense and soft coat whereas APBT has a shiny, thick and short coat. Whereas the two breeds may look identically similar, they also are similar when it comes to loyalty, devotion to the owner and intelligence.

However, it is generally observed that AmStaff is friendlier and behaves well with the children in comparison to APBT and that is why AmStaff is the darling of dog owners who want to keep a family dog as a pet.

The American Staffordshire Terrier passes through various stages of development before it finally becomes a loveable adult dog. Here we are going to discuss the growth stages in the life of an AmStaff.

Here we are going to discuss some of the diseases that may affect and cut short the lifespan of your beloved dog. American Staffordshire Terriers are more likely to develop dental problems. Starting from the buildup of plaque and tartar, it ultimately ends up with bleeding and aching gums and decayed teeth.

The dog can catch bacterial and viral infections. These are the same infections that any dog can get. The most notable of these include parvo, rabies and distemper. Other than that, it can be attacked by parasites. Parasites can cause pain, discomfort, restlessness and in severe cases may even lead to death.

Obesity is another serious health risk. It occurs when the dog cannot get enough physical exertion. Obesity is the mother of many other diseases. With obesity comes joint problems, heart problems and digestive disorders.

Knee cap dislocation and knee ligament tearing are two badly damaging knee diseases common to AmStaffs. Whereas AmStaffs are expected to live for 12 years, the same is not the case for their near cousins.

The life expectancy of American Staffordshire Bull Terriers is between 12 to 16 years which makes them living longer years than AmStaff.

The AmStaff is full of energy and if proper care is taken of its physical and emotional needs, the dog becomes your best friend.It is a medium-sized agile and muscular dog that is best known for its guard duties. Other members of its near family are the English Bull Terrier and American Pitbull Terrier. With a life expectancy of 12 years, American Staffordshire Terrier is the darling of family dogs.