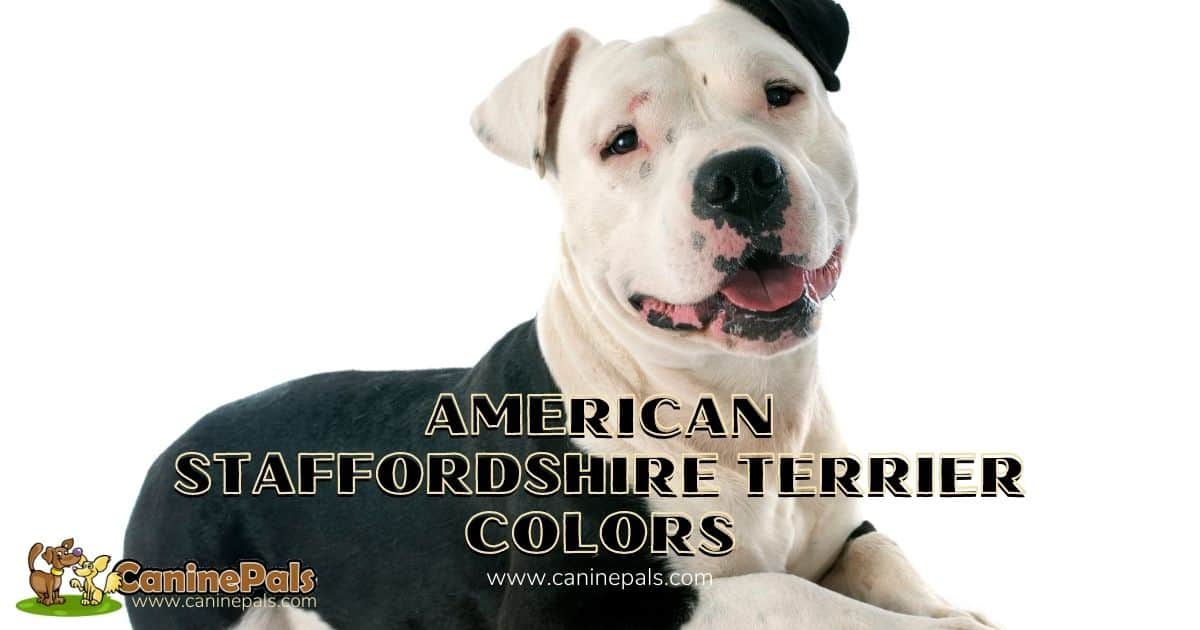 This article is going to discuss the variety of American Staffordshire Terrier colors. No other dog breeds come in as many colors as the AmStaff does.

The American Staffordshire Terrier is a muscular and agile family dog. It is an intelligent, playful and loyal pet that has a life expectancy of up to 12 years.

Stay tuned for more details that are yet to come.

Some color schemes are more widely seen than others. Occasionally, a rare coat color known as “grizzle” or agouti may be seen in American Staffie dogs.

The AmStaff comes in solid colors as well as in many combinations. Mostly white dots or patches are observed with a solid color such as black or blue.

In this section, we are going to delve deeply into the details of American Staffordshire Terrier colors.

A black and a white AmStaff is no different from a black one. The difference is that a black Staffordshire Terrier is thoroughly black whereas the black and white AmStaff has a black base with white spots on it. The white spots are found on the face, neck, forelegs, and on the lower portion of the hindlegs. The toes can be white as well.

A blue AmStaff is darker in tone. It is so dark that a novice might take it as black. But in fact, it is not black but a heavier shade of blue. Just like black Staffordshire Terrier, a blue AmStaff is thoroughly blue. All the visible skin is the same color. The eyes are dark. There are no patches of white or any other color.

The face is white with blue patches on it as well. You may find a blue spot over the ear or around the eye. The neck, forelimbs, and hindlimbs are generally white. The white patches may also be visible on the body of this AmStaff.

The Blue Brindle American Staffordshire Terrier is somewhat similar to the Blue AmStaff. It has stripes that resemble gray with a tinge of fawn. The whole body is covered in dark-colored stripes. Even the face, legs, and tail exhibit the same color. The darker shade of fawn may also be found along with the stripes of the body.

A blue fawn Terrier looks like a brown-colored dog. The skin is colored blue fawn throughout. The shade may range from a lighter version of blue fawn to a darker one. There are no patches of any other color. However, the nose may have a black patch around it.

This kind of Staffordshire Terrier has white spots on a blue fawn skin. The skin is colored white rather than having any patches in specific areas. Usually, the neck, front and hind legs are white in color and the rest of the skin is blue fawn.

Blue Fawn Brindle is a cross between blue fawn and blue brindle. This type of AmStaff has a blue fawn body with blue brindle stripes. The nose and mouth area is slightly darker or might be black. The rest of the body has dark gray stripes.

It is a blue fawn brindle AmStaff with white portions of the skin. The lower body is preferably white with an occasional white patch on the face and legs. The rest of the dog has a fawn base and brindle stripes that appear dark gray in color. The stripes do not run across the white patches.

Fawn brindle resembles very much the blue fawn brindle. Both have a fawn skin with gray stripes running along the body. The only difference is that the fawn brindle Staffordshire Terrier has a greater number of stripes and these are darker in tone.

This fawn American Staffordshire Terrier looks like a light brown or golden-colored dog. The fawn sable AmStaff resembles a blue fawn. But where the blue fawn displays darker shades of color, the fawn sable is lighter in color and has lighter notes.

The fawn sable and white American Staffordshire Terrier is a fawn sable AmStaff with occasional patches of white on the face, around the neck, on the back, and in the fore and hind legs.

It is a red brindle dog with patches of white. The white contrasts with the darker red brindle and makes the appearance agreeable.

Red sable is one note darker than the blue fawn and two notes darker than the fawn sable Staffordshire Terrier. In this way, it is the darkest brown in the color scheme.

A red sable with white patches of skin is red sable and white Staffordshire Terrier.

The Staffordshire Terrier was a cross between Bulldog and Terrier dog breeds. It was specifically bred to become a blood sports champion. The blood sports are history now and the wildness of this breed has been tamed. It has been civilized enough that it has become a darling of the family dog owners as a beloved family pet. They are also used as guard dogs.

The Am Staff is an intelligent dog and understands the commands of its owner perfectly well. And this trait makes it an ideal dog for novice dog owners. You just need to establish leadership over it and you are good to go.

Am Staff has a short coat. A short coat means that it is moderately sensitive to touch and cuddling. With a short coat, Am Staff is an easygoing dog. It is very tolerant and resilient.

But a short coat also means that it cannot keep itself warm in winters. Hence, it needs to stay indoors in winters to avoid catching a cold. However, Am Staff can withstand the heat. But you should avoid taking your dog out in extreme heat, let alone make it exercise under the sun.

The most prized characteristic of the American Staffordshire Terrier is its friendliness. Some dogs want to stay aloof, laying in their beds all day – not with AmStaff. The dog loves to be around and interact. It is full of energy that keeps it going all day. It likes to stay busy and join you all day long no matter how much work you command it to do.

The AmStaff is kind to older kids as well. Children love the affectionate presence of the Staffordshire Terrier. It bonds well with the kids. But being a muscular dog, can sometimes be harsh with the kids. Hence, it is advised that the dog and children’s time should be supervised by an adult.

American Staffordshire Terriers are very aggressive to other dogs, however. It cannot tolerate the presence of any other dog. With early socialization in the form of training, this defect can also be overcome. These terriers make great family pets and also are good guard dogs.

Finally, the puppy continues into adulthood and becomes a playful, loving, sociable, and loyal dog that is loved by its family.

The Staffordshire Terrier exhibits a range of colors. Some of which are solid colors such as black, blue, fawn, and brindle while others are striped with darker tones. Occasional patches of white create variations in the color scheme of this dog.

The color range displayed by American Staffordshire Terrier is remarkable. You would find many colors that you may have not heard of earlier. But now you know that your much loved Staffie comes in multiple shades and colors. Find the perfect one for you and your family.