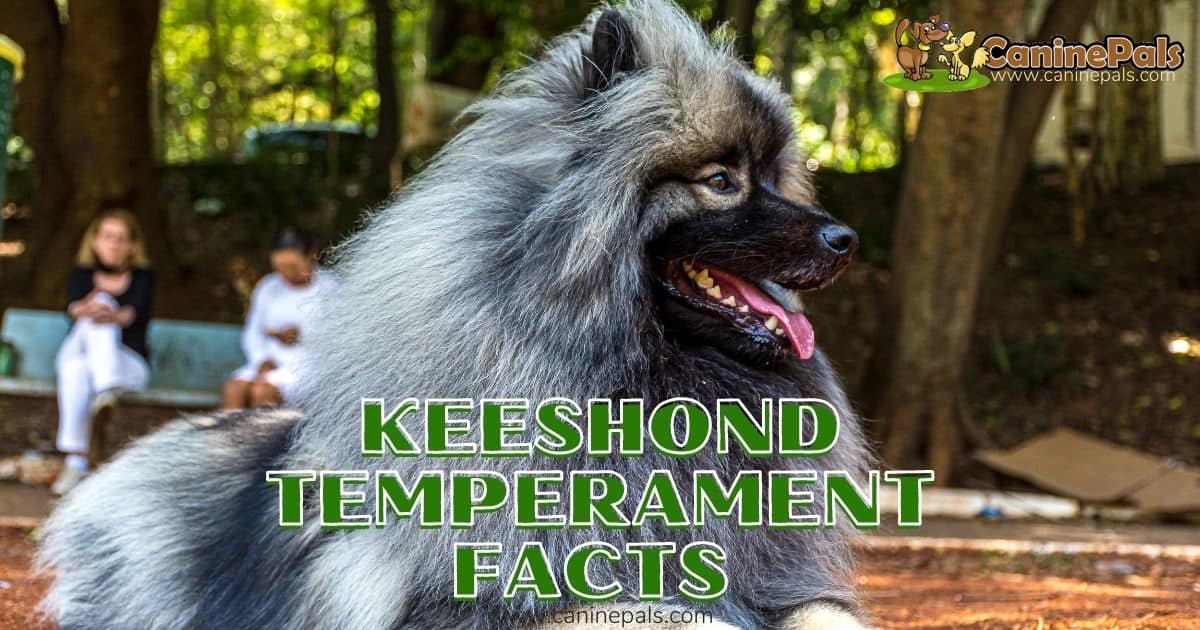 Medium in size, covered in a thick woolly coat, curled tail, small and pointed ears, spectacled eyes and an expressive face – Keeshond is known to be the best family oriented dog. Unusual barking, however, is a downside of Keeshond’s temperament.

Affectionate and family oriented, kids friendly, kind to other dogs as well as strangers, playful, bright, agile, obedient, quick and sturdy are some of the salient traits when it comes to Keeshond temperament.

This article is all about the outstanding traits of this loving family dog Keeshond and Keeshond temperament. So, brace yourself for all that is yet to come.

History of the Keeshond Dog

Keeshond is originally a Dutch breed. Genetically, Keeshond is a close cousin to Samoyed, Chow, Norwegian Elkhound, Finnish Spitz and Pomeranian. Loved by riverboat captains, farmers and working people, Keeshond was generally a country dog back in the 17th and 18th century Holland.

But Keeshond became famous for its role as a companion and the vigilant watchdog on small vessels and barges that sailed through the man-made waterways.

The dog became the center of ire and anger in the historical power struggle between the supporters of the Prince of Orange and their opposers who were  known as the patriots. The patriot leader owned a Keeshond and kept it along as his constant companion. Keeshond thus became a symbol of rebellion against the Prince of Orange.

The power struggle was won by the Prince of Orange and the dog bore the brunt of unhappiness of his followers and fell into infamy.

The Keeshond is descended from various dogs including the Samoyed, Pomeranian, Norwegian Elkhound, Chow Chow and the Finnish Spitz. He was popular in Holland during the late 1700s and became a symbol of Kees de Gyselaer, the leader of the Dutch Patriot political party who had a dog named Kees. Once defeated, they became very rare but resurfaced in America and England 100 years later.

The Keeshond was a watchdog on farms, barges and riverboats. This dog has a fox-like expression and his coat is coloured black, cream and gray with various shaded colouring and “spectacles” around the eyes.

The Keeshond is an old dog breed and is exclusively known for its companionship and love of humans. This dog is a total people lover. If you want to own a lively and agile dog that should participate in all the family activities then you must own a Keeshond.

He’s a good-natured, affectionate dog and relates well to people and other dogs. He’s a fast learner and is full of energy, needing regular exercise. His coat should be brushed twice each week.

This section is all about the Keeshond temperament and personality traits.

Keeshond is a medium sized dog. He’s 17 – 18 inches high. According to American Kennel Club, the average height of a male Keeshond reaches up to 18 inches whereas a female dog can reach as high as 17 inches.

The average weight of a Keeshond is somewhere between 35-45 pounds.  The life expectancy of this dog is between 12-15 years.

Dog owners do have an ample idea what it is like if your dog sheds its fur. If the shedding is massive, it becomes a pain to clean around. Keeshond shedding level is somewhat average. It certainly isn’t one of those dogs that shed massively. You can expect minimum shedding of its fur, however.

Keeshond coat grooming requirements are also not very frequent. It can be groomed as frequently as after every fortnight. As compared to dogs who drool so heavily that you always need to have a towel to attend to them, Keeshond drooling is less likely to occur. In that regard, it is quite a cleaner and drool free dog.

Also, with its double coat and long coat length, it is soft to touch and it is an amazing experience whenever you cuddle or hug this dog.

Keeshond is a kind dog in all respects when it comes to its personality. It is highly adaptable to different situations. When it comes to training a Keeshond, it is not surprising to see that it is highly trainable. It learns quickly and obediently.

Filled with energy, it is highly agile and playful. But it certainly isn’t one of those breeds who are so full of energy that they tend to break stuff. It is filled only with positive and playful energy.

However, it is quite stern when it comes to barking. These dogs bark more often than other dogs and it can be a nuisance at times. Your neighbours are going to be annoyed because of its usual and high pitched barking.

The Keeshond loves to be engaged in play and it would get upset if left alone. It is necessary for Keeshond to have regular outdoor sessions. It is not the kind of dog who would recline all day long in the lounge.

Family affection of dogs ranges from extreme affectionate to extreme aloof. Some dogs like to spend all the time with the members of their family while other dogs would want to stay all day in their beds sleeping.

When it comes to Keeshond, it is well-known that it is a family oriented dog. It treats members of its human family as its best friend. It loves to play with them all the time and never wants to be left alone.

Keeshond is known for its love for the family. It is patient and loving towards younger members of the family especially the children enjoy its company. However, it is usually advised that dogs should be supervised by an adult whenever they are near children.

Behavior with Other Dogs

This characteristic deals with how a dog behaves in the presence of other dogs. Some dogs are hostile towards other dogs. Others are generally more friendly towards the members of their own species.

When it comes to Keeshond, it is kind to other dogs and behaves well.

Keeshond is a loving and affectionate dog. It is kind not only to the members of its human family, children and other dogs but also to the strangers that visit its owner’s household. He is open to strangers and treats them as his best friend.

Keeshond is agile, enthusiastic and playful. A Kees loves to be around and participate in the family chores, games and other activities. It is not one of those dogs who love to be in their bed all the time. It loves excitement and enjoys fun and work.

Keeshond as a Watchdog

Because of its agile, active and playful nature, it keeps an eye around. Nothing skips its attention. Because of these peculiar characteristics, Keeshond is ideal to serve as a watchdog. Even in its ancestral country, Keeshond served the purpose of a watchdog on small vessels and barges.

Keeshond is a highly adaptable dog. It is not like those dogs who always like routine and would never adapt to changed circumstances. It is quite adaptable when it is keenly asked to by the owner.

Keeshond is a sensible, intelligent and loving dog. It is cheerful, bright and lively. These characteristics make owning a Keeshond to be a fun experience. It needs constant companionship. That can be a good thing as well a bad thing.

It can be a good thing in the sense that if you are alone and isolated, this dog would provide a loving company. It would obey you, bring stuff for you and be happy around you. But if you have a job that requires you to stay in the office for long hours, it would be hard for Keeshond to tolerate that.

On a positive side, it is family oriented. It can earn the love, attraction and care of all the members of the family. Polite to strangers, decent with children and kind with other dogs. Keeshond is the darling of novice dog owners as it is easy to train.

Keeshond does have a barking problem. This dog barks a lot. In an apartment or a high rise, your neighbors are going to suffer because of the unwanted and unnecessary barking of your dog.

Keeshonds bark loudly and persistently in comparison to other dog breeds. If they are not trained early in life to control their barking, it becomes highly unpleasant for their owners later. Barking is the most interactive way of communication for a dog. Keeshond may bark for a number of reasons. These may include

When Keeshond senses any other dog trying to break into their sphere, they bark. The intensification of the risk leads to intensified barking. This type of bark is not gentle at all. It is louder and more aggressive.

From Fear or Boredom

Keeshonds have a tendency to bark if they feel frightened because of anything. If they are bored, you might expect a bark as well. Barking is Keeshond’s way of communicating.

Keeshonds bark extensively whenever they are ecstatic.

Yet another cause of Keeshond barking includes separation anxiety. If you have left your dog alone at home, don’t expect it to stay quiet all day.

If it is a Keeshond, it might start barking the moment you set your foot out of the house. Similarly, dogs bark in order to seek attention from their owner.

If you are annoyed because of the barking of your Keeshond, you should employ a few techniques. Whenever your dog starts barking, you need to figure out first what is the trigger. If you can identify the trigger, you can simply remove it to pacify your dog.

If you fear that the dog is barking just to seek your attention then you need to train your dog not to bark for seeking attention. You can start ignoring your dog when it starts barking rather than giving all the attention.

These are some of the techniques you can use to demotivate your dogs from barking.

According to American Kennel Club, there are six colors a Keeshond can appear in. The Keeshond colors are listed below.

Training a puppy is not about getting him to obey your command. It is all about how you want to live with your puppy. A well trained puppy is one that understands how you want him to be in the house. It takes a little effort, patience and struggle and you can enjoy a really happy life with a well-trained puppy.

It is normal for puppies to display every kind of behavior. They would do things that you like and other things that you don’t like. It is your reaction to a puppy’s behavior that trains it.

Playful, agile, kind and protective are some of the salient characteristics of Keeshond. This Dutch breed is known for kindness and love. Keeshond’s temperament is mild, friendly and welcoming. It is one of those dogs that would enjoy work all day. It keeps company and is a family oriented dog.

The only disadvantage of owning a Keeshond is the unusual and loud barking that creates hell of a nuisance especially at night. If the dog gets proper attention and training, it can overcome the barking as well.

Because of its many loving traits, Keeshond is the darling of novice and experienced dog owners alike.