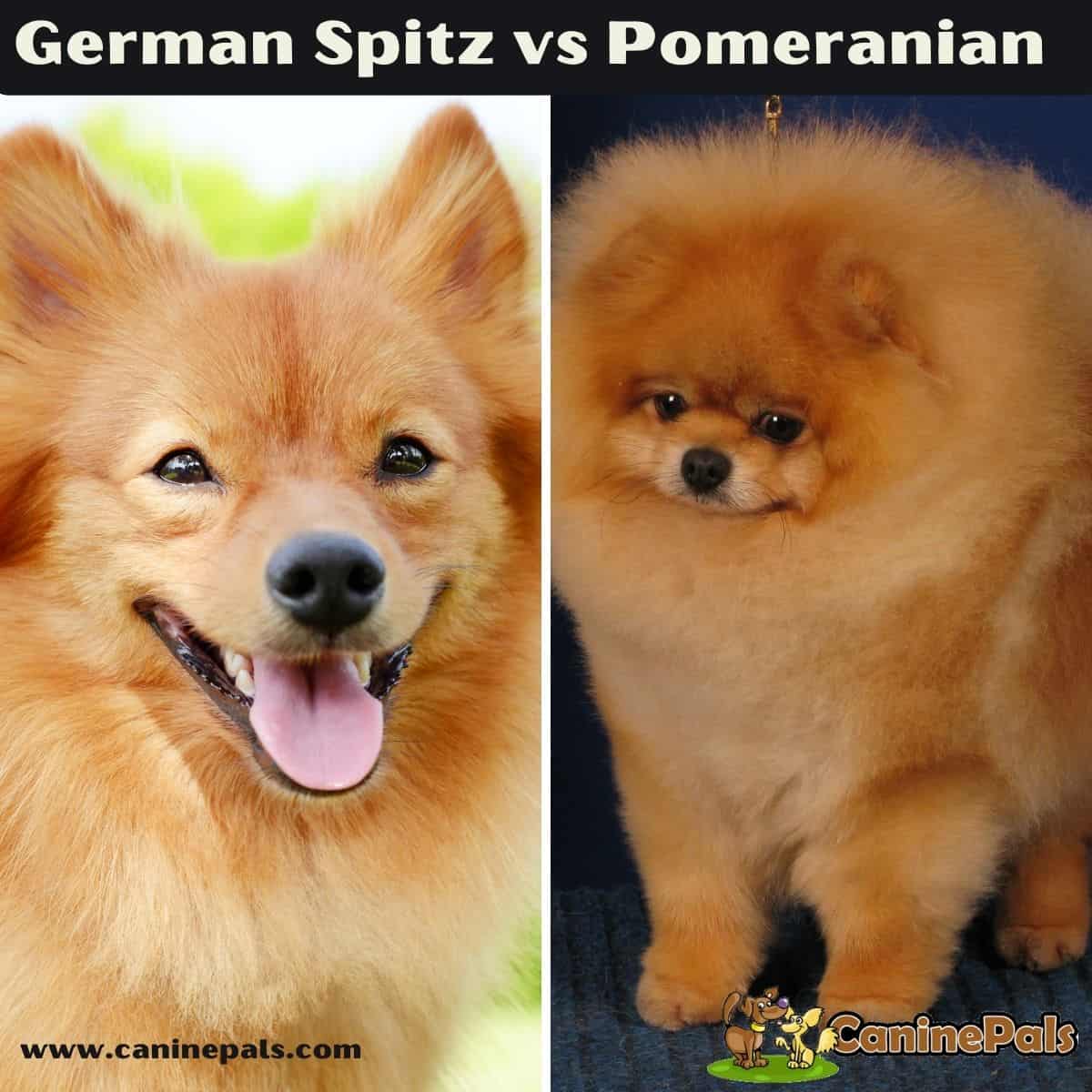 Looking for a perfect furry little pal but stuck with the German Spitz vs Pomeranian debate? Let us help you decide what you can expect from either breed! There are lots of dog breeds that are pretty similar to one another.

This statement is especially true for two dog breeds, German Spitz and Pomeranians, sharing the same ancestry. At first glance, you may feel that they belong to the same dog breed. The physical appearance of these majestic pals makes it a little difficult to distinguish between the two lovely species.

However, both German Spitz and Pomeranians have key differences, making them separate dogs falling under the umbrella of the Spitz family. Let’s have a look at both Spitz breeds to find out what makes them different.

Both German Spitz and Pomeranian dogs share the same heritage. They are the descenders of large sled-pulling Arctic dog breeds, and we can trace them back almost 6,000 years. Ever since their history has been intertwined. Germany is believed to be the origin of these guys. The initial purpose of both breeds was to serve as herding and watchdogs. Although today they make a great family pet, their piercing barking can make them wonderful watchdogs.

The first documented appearance of German Spitz dogs is from the 15th century. They are believed to be from the area of Pomerania. Back in the day, the poor members of society used them as forming dogs. However, the 18th century was when the royal nobles fancied this breed, and their popularity bloomed.

For pet lovers, it is vital to note that there are five official types of German Spitz dog breeds.

This article refers to the Mittel Spitz or the medium-sized Spitz, as this is what most people think is a German Spitz dog breed. After World War I, the population of the German Spitz suffered a major decline. But thanks to the breeders who revived the Mittel’s number by breeding the Keeshond with the Pomeranian.

Compared to the Pomeranian, the German Spitz is a new breed to America. Its popularity rating is not very high here, and the breed is pretty rare. At present, this fella is in the foundation stock service program, which allows rare breeds to establish recognizable statuses within the AKC.

The Pomeranians have taken their name from the province in Germany. The lovely fella was pretty popular in there. Although their origin is the same as German Spitz’s origin, but as a breed, this pal was developed in the United Kingdom.

It is said that some famous personalities, including Michelangelo, were big fans of this smallest Spitz dog. It is also believed that Isaac Newton had a Pomeranian who loved to eat many of his manuscripts. What a mischievous little nibbler!

Similar to the German Spitz, the Pomeranians also became famous with the English royalty during the eighteenth century. But back then, the Pomeranians were much bigger in size. Plus, they were not as popular amongst the general public.

Things changed when Queen Victoria I came across a 12-pound Pomeranian in Italy. It then became her favorite hobby to create a much smaller and adorable-looking version of Pomeranians. And eventually, the cute little fellow was refined to the size we know it today.

It may seem unfair, but the toy status of the lovely Pomeranian became an instant hit across the globe. Their popularity reached the sky, and in 1888 was when Pomeranian entered the American Kennel Club. Today, Pomeranians are ranked as the 23rd most desirable breed in America. In many European countries, this puppy is also famous as the Zwergspitz.

Both German Spitz and Pomeranians are small-size puppies. Due to the closely intertwined history, you can think of a Pomeranian as a direct descendant or a toy or mini version of the German Spitz dog breed.

The average height of the German Spitz is around 12 to 15 inches. The males and females both have similar heights. While both male and female Pomeranians measure only 6 to 7 inches. German Spitz can weigh up to 24 to 26 pounds.

Whereas a Pomeranian only weighs 3 to 7 pounds. The body weights are similar for both genders (male/female) in both breeds. So, the obvious difference between Spitz and Pomeranian is the height and weight, where a German Spitz can be two times taller and three times heavier than a Pomeranian.

The second biggest difference between the two breeds is their coat. Yes. Both breeds have double coats that kept them warm while watching their herds and farm animals back in Germany.

However, a German Spitz puppy has a soft and fluffy undercoat. Plus, these puppies have coarser and straighter outer coats. A Pomeranian has a short and dense undercoat. In addition, their outer coat has finer and longer fur, giving them a fuzz ball outlook. Usually, the German Spitz’s tail slightly curls to either side of his body.

While the poms have heavily plumed tail that sits flat against their back. Pomeranians have 18 recognized colors, including black, whereas only eight colors are recognized for German Spitz. Their head shapes and muzzles are also different.

For example, a German Spitz muzzle is 1/2 of its skull and is much longer. In comparison, Pomeranians have a much shorter snout that’s only 1/3 of their skull. German Spitz has triangle-shaped erect ears. Therefore, their ears are always visible. Pomeranians also have erect ears, but those cute little ears often disappear in this fella’s fluffy coat.

Despite the obvious German Spitz and Pomeranian differences, both breeds have a similar temperament. Both puppies are little pocket rockets. They are lively and will love to bounce around for hours. Both breeds love to stay on the go.

That’s why owners need to be with them most of the time, either cuddling or entertaining them. But if you have to go out for extended periods, then you must leave something entertaining behind for them to play around with. Their tiny legs and adorable paws might not need the exercise, but their hyperactive brain rarely rests!

The German Spitz dogs were originally bred for working and guarding purposes. Therefore they are naturally active dogs and have a tendency to stay alert. They are famous for their protectiveness. Your German Spitz puppy is highly vocal and may bark at the sound or sight of strangers.

These pups are extremely trainable and smart, but they are pretty self-aware and may become stubborn while dealing with inexperienced handless. Experienced attention and early socialization can make German Spitz an excellent addition to any family.

Pomeranian Spitz is a true example of a small dog with a big mindset. And the little pooch will be more than happy to prove it to anyone, anytime! Pomeranians are also quite vocal, and if given a chance, they may bark excessively.

This cute fellow is famous for his companionship and is a little less active than the German Spitz dog. So, he is a great match for individuals looking for a smaller and less active Spitz breed.

Although Pomeranians are highly intelligent and excel in obedience, they have a label of being relentlessly stubborn. But don’t worry, there is nothing that a hint of positive training can’t handle! Overall, both breeds are extremely social and curious and want to befriend everyone.

German Spitz and Pomeranians are generally happy with other dogs and may yap or challenge their fellow pups. Unfortunately, their adorable yet fearless challenges are what cause them injuries by unfamiliar dogs.

They are extremely affectionate and will love spending time while playing or napping on your lap. Both breeds are great with children, but it is important to teach our kids how to handle a small dog properly, so no one gets hurt.

No matter what the debate says about Pomeranian vs. Spitz, both puppies are firecrackers. They are middle-energy fellows who bounce all day long. These breeds need almost 30 minutes of exercise per day. And it is essential for their mental and physical health. It is good to socialize and train these guys as soon as possible.

It helps them to become comfortable in different situations. Plus, it increases your chances of getting a well-behaved pooch. So it’s not only beneficial to you but to your pet as well. Although they are not shy in any regard. But their small size makes the world a big scary place. So early socialization is necessary to shape them into vivacious and fearless dogs. Just the way they should be!

German Spitz was bred as a working breed. Therefore, their exercise requirements are a little higher than other small-breed dogs. A few brisk walks every day and at least 2 hours of playtime are vital to keeping them fit. In addition, these fur balls are natural athletes, and they need daily mental stimulation to build their confidence.

Unlike most toy breeds, the Pomeranians are a little more active, and their exercise requirements are more than the average lapdog. A few short but fast-paced walks and an hour of interactive games in the backyard should be enough.

One thing’s for sure, whatever you do, don’t expect these fur babies to be classic lap dogs. Cause if they want to, they can be a little destructive devil! Both breeds, especially the Pomeranian, need dog toys that are perfect for their size.

Pomeranians and German Spitz are both healthy dogs. German Spitz is a new breed in America, so only a little information suggests what health tests should be done on him, but both breeds suffer from similar problems. So it’s a safe bet for German Spitz lovers to have the same health evaluations:

The German Spitz and Pomeranians are similar in many ways. Both puppies have a life-loving and loyal temperament. They appear to look similar but are quite different when you dig down into finer details.

These guys are not like classic lapdogs and require moderate exercise plus special training, so they don’t get too arrogant. Therefore, you must complete your research before welcoming one of these cute little pals into your home.

Due to their shared ancestry, their traits almost go hand in hand. Whatever the Pomeranian vs. Spitz debate is, they both are small full of energy fluff balls. So, if you are after a small dog with a giant character, these guys are your way to go.