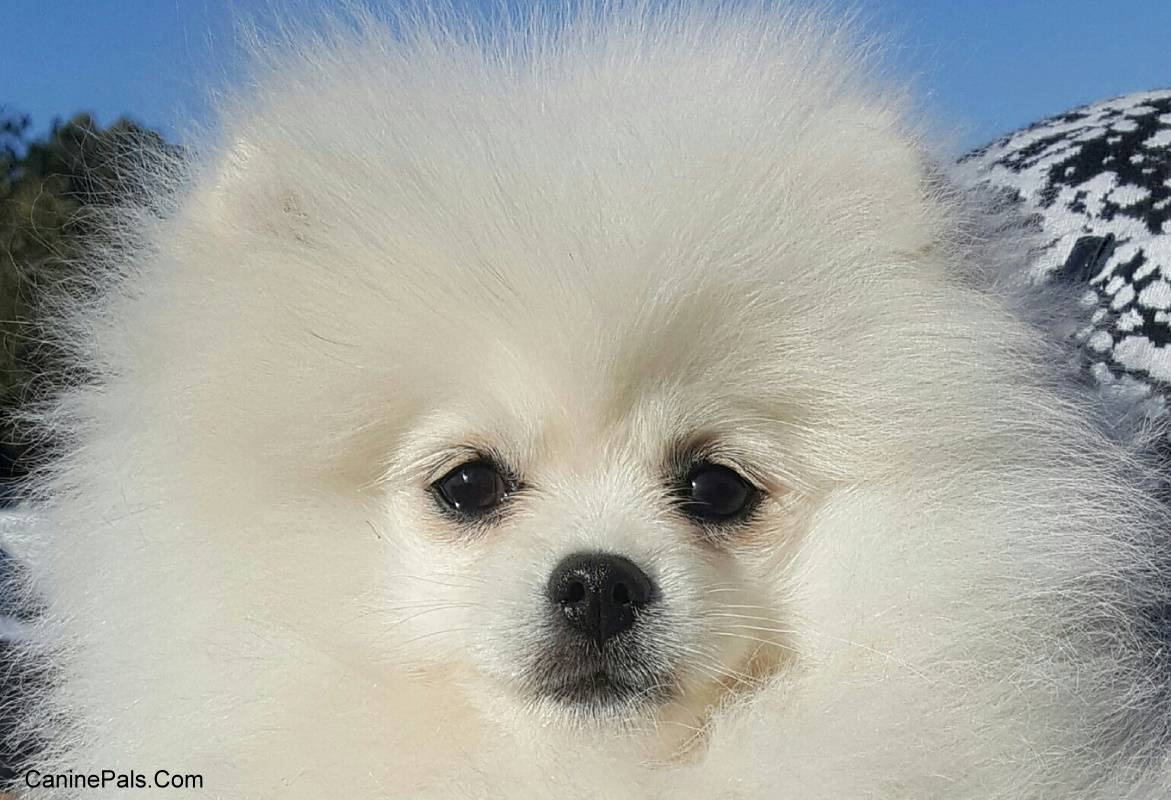 The Pomeranian ( also known as the Pom) originated from Pomerania (which is now Poland and Germany) and weighed almost 30 pounds. He was a great sheep herder at that time.

It is believed that the ancestors of the Pomeranian were the early wolf-spitz breeds of dogs. As the tiniest member of the Spitz family, Pomeranians also have a shared ancestry with Keeshonds and Samoyeds and similar Arctic dog breeds.

In 1870 he became better known when the English Kennel Club recognized this Spitz dog. Queen Victoria fell in love with the Pom dog while visiting Florence, Italy and brought one back with her, boosting his popularity immensely.

Characteristics of the Pomeranian

The Pomeranian is a delightful little person. He may now come packaged in an extremely small parcel, however he has not forgotten his heritage and behaves as if he is an enormously large husky dog.
A Pomeranian exhibits great intelligence and a vivacious spirit, is loyal, mischievous, affectionate and incredibly energetic. Making him a great companion dog as well as a competitive show dog.

The Pomeranian is commanding and animated as he gaits.
He stands at 8 – 11 inches in height. The average weight of the Pomeranian is from 3 to 7 pounds, with the ideal weight for the show specimen being 4 to 6 pounds.
He is medium-boned and feels sturdy.
The Pomeranian’s eyes are dark, bright, medium in size, and almond-shaped.
The coat is abundant from the neck and fore part of shoulders and chest, forming a frill which extends over the shoulders and chest. The head and leg coat is tightly packed and shorter in length than that of the body. The front legs and back thighs are well-feathered in coat.  His double thick coat must be brushed regularly.

The Pomeranians comes in a rainbow of colors. A Pomeranian’s coat color can be almost any color and pattern but the most common colors are red and orange.  Colors include Chocolate, Chocolate Sable, Orange, Orange Sable, Cream, Cream Sable, Parti Color, Blue, White, Beaver, Merle, Brindle, Wolf Sable and Black.

The Pomeranian is a compact, short-backed, active toy dog. He has a soft, dense undercoat with a profuse harsh-textured outercoat. His signature is a heavily plumed tail that is set high and lies flat on his back. He is alert in character, exhibits intelligence in expression, is buoyant in deportment, and is inquisitive by nature.

Owing to the breed’s diminutive size and high energy levels, the Pomeranian is not recommended for families who have small children. They are ideal for companions for elderly people or people living in units and flats because they are loyal, extremely intelligent and don’t require much exercise.

With the right training, he can be a great family dog because he loves to please. He needs lots of attention but not much exercise.

Although a Pomeranian’s coat will not need as much care as some of the other coated dog breeds, it is still essential to groom him a minimum of 2 – 3 times each week.

Because he’s small, he doesn’t need too much exercise. However, short walks or a run around the garden are necessary activities each day to keep him healthy and fit.

When considering a dog, it is critical that you understand that it is a lifetime commitment. The general life expectancy of Pomeranians is 10 – 16 years.

All dog breeds can go through a range of health problems and some are more common in specific breeds, including cross-breeds.

Remember, even the most conscientious breeder may have problems, however, since they are screening for genetic problems, you have a better chance of having a healthy puppy.

Pomeranian luxating patellas (knees that slip out of place) are the most common problem in the Pomeranian breed.   The knees are graded according to the OFA (Orthopedic Foundation for Animals).  Normal knees are, of course the most desirable, but Grades One and Two are more common and not unusual in toy breeds.  Grades Three and Four may require surgery, sometimes early on in the dog’s life.

Be sure to check the knees of any prospective puppy.  One with higher grades at a young age will probably be a candidate for surgery. OFA has forms to fill out on the grade of the patellas and both parents should have their results on file.  Remember, only a “normal” result may appear in the database.

Hypothyroidism (low thyroid) is very common in the Pomeranian breed.  Ask to see the results of the thyroid tests of the parents of the puppy you are considering.   OFA has a registry for dogs who submit tests for thyroid.

There is a coat loss problem in Pomeranians called SHLS (Severe Hair Loss Syndrome). It is also known as Black Skin Disease and Pomeranian Alopecia X .  Occurs mainly in males.  They may have profuse puppy coats with no guard hairs, which does not shed.  When the puppy coat sheds, the coat does not grow back.  Another version of the same condition happens at a later age, with a normal appearing coat that slowly starts to thin, starting at the back of the thighs and buttocks and moving up the back.  Ask to see the parents of the dog you are buying.

Collapsing trachea is a problem found in many Poms.  If your pom makes a honking noise or sounds like he is coughing up a hairball, the problem may be his trachea.  It can be diagnosed with a X-ray and usually medication is prescribed to reduce coughing.  This can be a life-threatening problem, so do not ignore it.

Heart problems can range from very slight to life threatening.  Some are impossible to diagnose until a sudden death occurs.  Ask your breeder if heart problems run in the lines he is working with.

Hypoglycemia can occur in young Pomeranians.  It is more common in the very small or very active puppies.  Be sure that your breeder gives you complete instructions on how to determine if your puppy is starting to develop hypoglycemia.  It is a problem that the puppy outgrows as they mature.  Adult hypoglycemia is a serious metabolic disorder.  Dogs who have this should not be bred.

Is a health issue known to occur occasionally in the Pomeranian. Perthes disease occurs during 4 to 11 months of age. Perthes disease is a problem with loss of blood supply to the hip joint, resulting in lameness and extreme pain for the animal concerned. Surgery will help.

A Veterinarian who is trained to do CERF testing can check eyes for genetic problems.  CERF (Canine Eye Registry Foundation) has a form and a database to check the parents of the puppy you are considering.  To date. there have not been many eye problems found, but that may be because not many dogs have been tested.   Ask to see the CERF results of the parents of the puppy.

Male Pomeranians are sometimes prone to abnormal descent of one or both testicles. Castration is routinely recommended for Pomeranians affected by this problem. Ignoring the problem can result in a higher risk of testicular cancer in the retained testicle. This defect is considered to be inherited.

Coccidiosis is a protozoan intestinal infection that can sometimes affect Pomeranians and can cause severe diarrhea and dehydration in puppies. Symptoms of these infections include rank smelling stools that may include mucous and blood. If you notice these symptoms, you should take your puppy to your family veterinarian for a fecal exam.