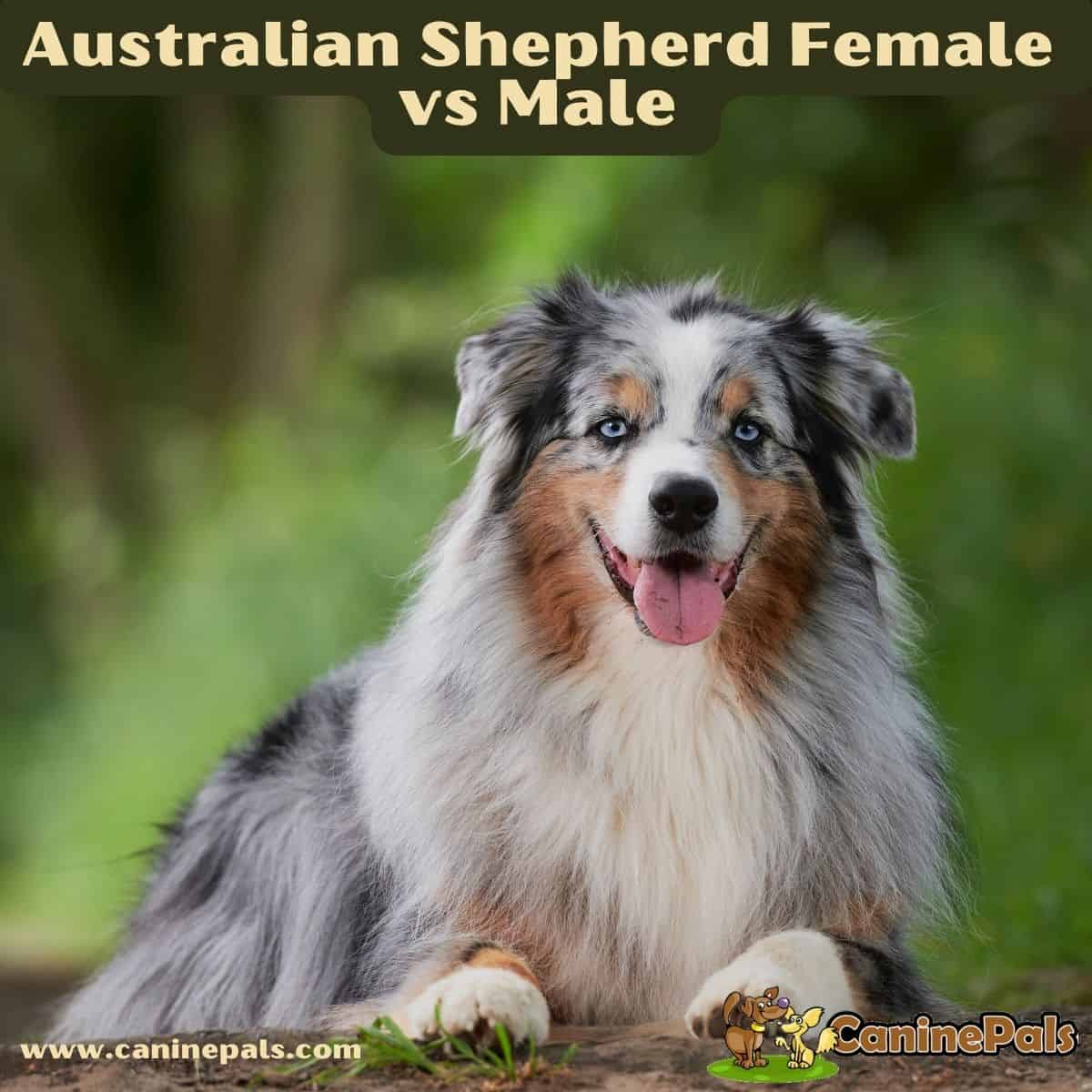 Australian shepherds are the friendliest dogs. Thanks to their fun-loving temperament and most expressive innocent eyes, these witty furballs make the dreamiest pets for anyone looking to adopt a playful puppy.  The Australian Shepherd is not an Australian dog breed.

If you are already adamant about buying an Aussie Shepherd, here comes the main question; Australian Shepherd female vs male? Which one is best for you?

You may choose a puppy according to its features, personality types, trainability, and temperament, regardless of gender.  Be it a male or female, what matters most at the end of the day is how well you two can bond and reciprocate each other’s emotions.

The Australian Shepherd has powerful guarding and herding instincts and needs lots of daily exercise. He’s a people dog, although may be reserved when around strangers.

If you are still clueless about which one would suit you best, scroll down and get to know in detail the key differences and similarities between male and female Australian shepherds.

Male vs Female Australian Shepherd- What are the Key Differences?

Choosing a male or female puppy is more of a personal preference. Even though they do not have any significant differences to take into account, however, a few aspects like physicality and temperament may differentiate male and female Aussie fur babies from each other.

Size is the most prominent difference between male and female Australian shepherds. Australian Shepherd Male size is noticeably bigger than the female size.

Females also differ from males in length and are relatively more minor. The average length for a female dog ranges from 28 to 31 inches, whereas a male Australian shepherd grows from 31 to 36 inches in length.

Overall Australian Shepherds are medium-sized dogs with flexible natures and the most adaptable personalities.

Male dogs are naturally heavier than female dogs in most dog breeds. Australian shepherds are one of those breeds as well.

Male Australian shepherds have a more macho presentation due to thick coats, heavier build, and muscular bodies than their female counterparts.

The heavier head, stronger bones, and ultra-masculine physical features typically distinguish male dogs from females, and Australian shepherds are not exceptional. They also have a particular difference in appearance.

Conventional female adorableness and male masculinity are a part of the Australian Shepherd breed as well, and you cannot defy nature when it comes to action.

Australian shepherds love to please their owners, and they are behaving very well in order to get verbal praise or treat from the owner. They are also categorized as one of the most intelligent dog breeds; therefore, training them is easy.

However, male and female Australian shepherd’s training temperament is slightly different from each other.

Male Australian shepherds are eager to learn new things, so it’s easier to get them on the training track, but boys are boys. They are highly distractible and may lose focus quickly therefore the trainer has to be alert and present. They need constant change in stimulus if you want them to retain attention for longer.

Does it mean male Australian shepherds are harder to train than females? No.

As far as training ability is concerned, both genders are equally intelligent and quick learners. Their innate desire to please the owner also drives them to behave and train well. Just keep giving them attention, and you shall enjoy their obedience to the fullest.

The Australian Shepherd herds livestock and works on ranches and farms. He needs to be kept active to stay happy. Because of his versatility and high intelligence, he also excels in obedience, agility, and herding events in shows.

Australian shepherd male vs female temperament is another point to ponder. They do not have an apparent difference in temperament and both are equally playful and loving; however, some distinctive features set them apart.

Male Australian Shepherds are referred to as more loyal and compassionate. They are very protective of their owner and often shower them with great love.

They are also quite expressive and straightforward. Australian Shepherds behave pretty obviously when they like you, so rapport-building is reasonably easy with male Australian shepherds.

On the other hand, female Australian shepherds are subjected to receiving love and attention more than they would like to give. It does not mean they do not show love or loyalty, but in general, they need a little more time in coming out of their comfort zone and being expressive.

Australian shepherds are not aggressive; instead, they are highly expressive. They are super jumpy and energetic. Australian Shepherds have a huge tendency to howl, and this breed is known for its noisiness.

They are pretty sensitive and dependent; Separation anxiety is pervasive in Australian shepherds, so you may expect your dog to bark his lungs off on days you arrive home late. If left alone, they have a tendency to become noisy, unhappy, and frightened.

Females Australian Shepherds are calmer and more relaxed as compared to males. You can train them efficiently not to bark when you leave through treats and appropriate behavioral training.

Australian Shepherds are known for their loyalty and companionship qualities. Male and female both are equally loyal, but Male Australian shepherds like to be around the owner all the time, which often makes them look more loyal.

You shall not mistake typical female self-containment with disloyalty. Females of this breed are also very devoted to their caregivers.

Unlike females, Male Australian shepherds can mate anytime around the year. A male body is always prepared to mate successfully- provided the female is in the reproductive phase.

If you don’t want your female dog to get pregnant or you do not have time to invest in producing a litter, you may get your female spayed. Spaying is a surgical process in which a doctor removes ovaries and other reproductive parts from a female body. This way, the female permanently loses its ability to reproduce.

Another way to stop female dogs from getting pregnant is to keep them away from male dogs when they are in the reproductive phase and looking to mate instinctively.

Males generally get very aggressive if you do not make proper mating arrangements for them. Many owners get male reproductive organs removed too, to avoid this problem. This process is called neutering. Dogs also undergo a surgical process during which their testes get permanently removed.

The life expectancy of male and female Australian shepherds is quite similar. Both genders have a life span of around 13 to 15 years. However, the diseases differ in nature.

In females, uterine cancer or mammary infection is more common while male Australian shepherds suffer from testicular cancer and prostatic hyperplasia. Spaying females and neutering males help in curbing down the susceptibility to these life-threatening diseases.

Other diseases like corneal infection, arthritis, and orthopedic concerns are common in both male and female Australian shepherds.

Male and female Australian shepherds are very lively and high-spirited dogs. They possess the ability to keep their owner on their toes with their vivacious and fun-loving attitudes.

They are also extremely intelligent, so you may need to put their brain to good use by assigning them different indoor tasks.

If you have Aussies at home, you must engage them in different indoor dog activities or take them out for a walk regularly; otherwise, the boredom will make them show destructive behavior like chewing on furniture, howling, or running around the house.

Neither the Aussie approves of becoming a couch potato himself nor allows the owner to do so. Be ready to have unlimited fun if you are planning to adopt an Australian Shepherd.

The Coat and Color

Male Australian shepherds though have a sturdy appearance and a slightly denser coat however, the male and female dogs look the same when it comes to color and beautiful thick coats.

They have a double-layered coat of medium length, which comes in an array of beautiful colors. His coat can be red, red merle, blue merle, black, and sometimes may have markings. Some dogs also have tan points around their eyes, neck, chest, tail, or legs.

The downside of this thick coat is shedding. They shed twice a year, so you may have to take precautions regarding maintenance and care of the coat. The thick coat needs brushing weekly.

Australian shepherds are the best family dogs. They are very protective of their family members and are known for their loyalty toward them.

They are enormously affectionate towards kids as well, and you do not have to worry about a child’s safety around an Australian shepherd. However, you may need to train them not to nip on kids in an attempt to herd which comes naturally to them.

Australian shepherds long for human affiliation and company. They want to be around the family and would love to spend time sitting near you on the couch and play with you in your leisure time.

If pleasing the master had a face, it would be of an Australian shepherd. They just cannot take the rudeness of their master and have to make him happy. Due to this quality, they are straightforward to train and manage overall.

You can even train your dog to help you with simpler house chores. Your Australian shepherd can easily be trained to pick up dirty clothes off the floor or wash the bowl underwater after having a meal.

They are super intelligent, which enables them to learn and adapt to new things quite fast.

Are male or female Australian Shepherds better and more reliable pets? Of course, they are. Their dutifulness towards their owner and the sweet face with huge innocent-looking eyes has successfully made their way to many hearts and homes.

Male vs female Australian shepherds, which one is more suitable is a very common concern of several people who want to adopt this breed. The difference between male and female dogs is more related to physical aspects and becomes negligible when deciding to buy one.

Your dog’s eagerness to please you will make it a lot easier for you to train him therefore Australian shepherds make the best pup for a first-time dog parent.

Having said that, either male or female, you are going to love the company of this playful, vibrant, and loyal dog and wouldn’t regret your decision to buy one.