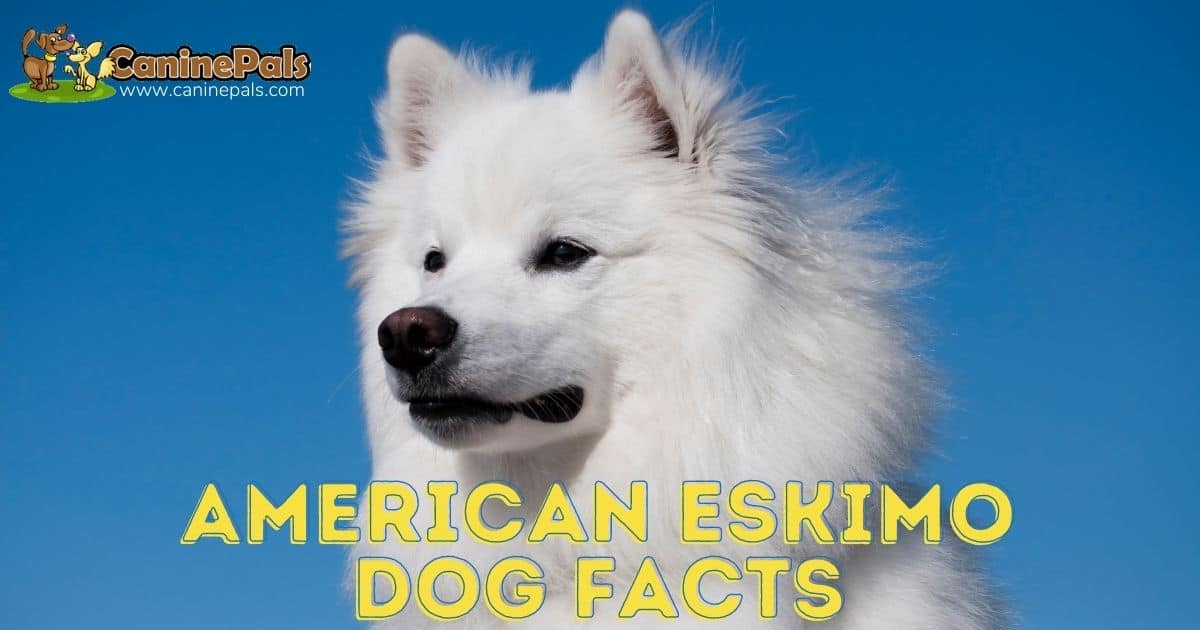 An American Eskimo dog looks like an ultimate snow angel.  With an Eskie (the American Eskimo’s nickname), a cuddle or two is enough to melt your heart. The poofy Eskimo takes no time winning your love. SURE!

So, here we are with the most exciting facts that every Eskie owner should know. I bet you’ll be glad you know the fun facts about your dream dog.

1.   They Own an Amazing Title

To celebrate and acknowledge the aesthetic beauty of the white Eskimo dog, their admirers have rightly given them an amazing title – “The dog beautiful”! What else could somebody call this snowy beauty, right?

2.   Their Origins are in Germany

Oh, so when you first read the name the American Eskimo Dog, you thought Eskies originated in America?

But let me correct you…

The ancestors of the American Eskimo Dog originated in Germany and were the descendants of German Spitz.

3.   Eskies were used as Herders and Guard dogs

Now everyone’s favorite family pets – American Eskies, were back then herders, livestock guards, and hunting dogs. No, they were never bred to be sled dogs, but they really can surpass agility competitions.

4.   The Secret Reason behind their Popularity

Do you know what made American Eskimos so popular? Their entertaining agility stunts! In the late 19th century, traveling circuses shot up the fame of the American Eskimo dogs. Eskies were easy to train and perform in the circus. Their snowy white coats made them sparkle in the spotlight and rock the circus. Thanks to their showy looks!

You might have seen acrobats walking a tightrope? Right? But…

How in this world can a dog walk on a tightrope? It’s unbelievable! However, an American Eskie Pierre left its admirers in awe by becoming the first dog to walk a tightrope. Woah! Pierre was America’s most performing dog in the 1930s.

6.   They have Three Distinct Sizes.

American Eskimos come in three sizes. Standard, miniature, and toy. And the standard size weighs no more than 35lbs.

7.   They Come in Delicious “Biscuit” Colors.

That means an Eskie has a white coat and a “biscuit” colored fur around the corners.

In the early 1800s, when the German immigrants made their way to American shores, they left an ever-lasting Nordic impression in the upper Midwest.

Apart from German-style food, culture, Lutheranism, and the brewing industry, they brought another incredible thing to America. You guessed that right; it was none other than – Nordic dog breed, called German Spitz.

Later on, these little whiteys became the ascendants of modern Eskies. Here’s a detail of the breed’s working history.

German Spitz were originally used as farm dogs. There, these farm dogs would keep the predators and strangers out of their territory. Not only did these farm dogs have to recognize their dog breed, but they also had to differentiate between the invading livestock.

Arriving in the US:

When German settlers moved to the US, they resided in the MidWest, Southern Texas, and New England as these areas look much similar to the German countryside. After settling in America, the Germans still used the ‘Spitz’ in the same way they would do in Germany.

Spitz’s journey as the circus trick-dog had begun in Germany since the breed was eye-catching, intelligent, and easily trained. The gypsies would teach their Spitz the tricks and would invite the towns’ people to watch. Subsequently, some of the circuses in Europe started using Spitz in their circus acts. In the late 19th century, the American Eskimo dog ruled the traveling circuses.

A little on its official club registration now…

In 1913, the United Kennel Club (UKC) registered the breed under the name “Spitz”. Spitz is a German word that means “Sharp point.” These dogs were named Spitz because when they would become alert their ears would stand erect like a sharp point. Also, these Spitz breeds are called Nordic breeds. Both of these terms are interchangeable.

America took up World War I in 1917, and later this entry latched on to a severe prejudice against every Teutonic thing. Resultantly, in 1925, the breed’s German name – American Spitz – was changed to American Eskimo Spitz. Afterward, in 1926, the German word “Spitz” was completely taken off from the name.

American Eskimo dog is a charming, perky and playful dog. Eskies are a combination of beauty and energy at the same time! Their unique physical traits include a fox-like face, triangular black nose, pricking ear, pearly eyes (not fully round, slightly oval), and black to dark brown eye rims.

What adds more to their beauty?

Their white coat and a plumed tail – which he proudly and loosely carries above his back! Though the Eskimos have a stand-off coat, it’s thick, glossy, smooth, and straight. Apart from that, you’ll also see a ruff from his chest to the shoulders. That lion-like ruff is more prominent in Eskie males than females.

Moreover, the American Eskies are dogs choked full of energy. Always ready to take up the mental challenges and vent out through exercising. If you leave an Eskie alone for long periods or don’t provide him the exercise level he requires, he’ll become destructive.

Keep your snow-mutt engaged. You can do so by providing him with a collection of interactive toys in a securely fenced yard. Another wise choice is to keep him in his crate.

I hope that makes sense!

The Size of American Eskimo Dog:

American Eskimos are small to medium-sized dogs. And they come in three size variations. Here is a lowdown of their three sizes and weights.

American Eskimos are highly social dogs. They love being a part of a family and enjoy companionship. They are so keen to delight their owners. Looks like it were the Eskies who invented the term “eager to please.”They didn’t just come up with the term. They ACTUALLY mean it!

Don’t let their warm coat fool you. Eskies are totally indoor dogs who are happy to bond with the people around them. They love to interact. In their puppyhood, they are the most playful pups you’ll see. When they reach above their middle age they become calm, and, that too, is another level of cuteness!

An Eskie craves nothing but companionship and interaction. If you leave your furry alone too often (which you shouldn’t) and don’t have a healthy interaction, I am afraid your cute boy will turn into a problematic creature out of boredom.

To own an American Eskimo dog, you too have to be a confident owner. Only a sure-footed leader can become an Eskie’s in charge and accompany him. Eskies are fast learners. They can even learn by observing other dogs. Therefore, training an American Eskimo dog can be a pleasant experience.

American Eskies are a complete package of brain and beauty! So, they are smart, for sure. They have the instinct to please. And due to their quick and curious nature, Eskies are said to be smart doggies. Eskies are among the most trainable breeds.

Teach them simple commands, they will master them. Train them for the most complicated tricks – like, walking a tight rope – they’ll get the hang of that too. Keeping their smartness in mind, the fact that American Eskies excelled as circus tricks is of little wonder.

How Much do American Eskimos Shed?

American Eskimos have a double coat. The longer outer coat and a short, dense undercoat – below the outer coat! You’ll be surprised to know that despite their white coat color, Eskimos are extremely easy to keep clean. That’s so because their body produces oil that doesn’t let dirt cling to the fluffy’s fur.

However, American Eskimo dogs shed a lot. Almost, constantly. You can thoroughly brush their fur to remove the dead hair before they spread out. Brushing also will help detangle the fur. Above all, their fur’s upkeep is not a task you have to perform every day. Brushing only twice or thrice a week will suffice.

Many dog owners are worried about that displeasing dog smell. But when you are considering an Eskie to be your companion, let this concern go aside. American Eskimos don’t smell unless they are VERY dirty. They love cold weather. However, they also fare well in other climates.

The Lifespan of an American Eskimo Dog

Another noteworthy thing American Eskimo Dogs are known for is their longevity.  Many Eskies have lived until their middle to late teens. However, the average lifespan of an American Eskimo dog is 13 – 15 years.

American Eskimos are relatively a healthy breed as compared to other dog breeds. But, of course, they are not completely free of health concerns.

Hip Dysplasia is an inherited condition. In this condition, the thigh bone doesn’t fit in the hip joint. As your dog ages, this disease can further open the doors for arthritis.

In this disease, the retina of the dog’s eye starts deteriorating. First off, a dog becomes night-blind. As the disease progresses, they may also lose sight during the day.

This eye disease is thought to be hereditary. You’ll find this health condition in normally younger Eskie pups – less than six years old!

The Average Price of an American Eskimo Pup

Some factors that affect the ranges of the Eskimo puppies are following:

The American Eskimo Dog is a Nordic dog, known for his white coat, black points (nose, lips and rims of his eyes) and his erect, triangular ears. He used to be a circus dog but today is mainly used as a companion and also participates in shows for agility, obedience and conformity.

His double white coat has a dense, short undercoat and that’s covered by longer hairs that protect his body and stand out from the body. His ancestors were the Keeshond, the German Spitz, the Italian Spitz and the white Pomeranian.

This dog is very alert, intelligent and friendly but also makes a great watchdog because he can be fiercely protective of his family and home. He’s a fast learner and keen to please.

He needs exercise every day. As his coat sheds hair, it must be bathed and brushed regularly. There are three types of the American Eskimo Dog: standard, miniature and toy. The sizes range down from 19 to 9 inches high from the shoulders.

The American Eskimo dogs are striking dogs with sweet expressions on their face. Love them and they’ll love you back. Ask them to guard, they’ll do their duty.

Teach them some tricks, and they’ll stupefy you. Overall, this perky creature is enough to brighten your mood.

Get yourself an American Eskimo and you won’t have to wait for snow season to grab a snowball. Believe me, you’ll enjoy your Eskie more than snow. Woo-hoo! I hope you enjoyed reading the American Eskimo dog facts. What was the most enticing fact you came to know? Tell me by dropping a quick comment below.