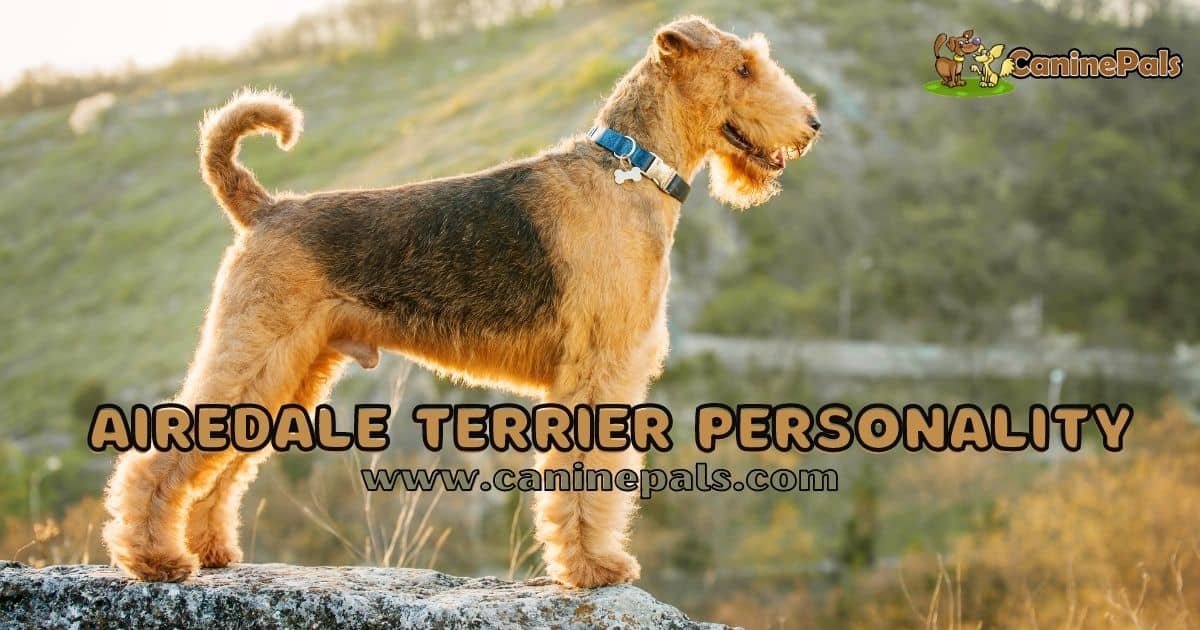 Airedale Terriers are playful, intelligent, and highly energetic dogs. They love to be the center of attention and do well with people who can offer them plenty of exercise, mental stimulation, and affection.

In addition, Airedales are very loyal companions who will always want to be near their owners. If you’re considering bringing an Airedale Terrier into your home, you must know what kind of personality they have so you can make sure they’ll fit in with your lifestyle. Read on for more information about this breed.

It’s believed that he originated in the Aire Valley as a descendant of the black and tan terrier which is now extinct. Apart from his use as a police dog, he became known for his abilities as a hunting dog, a pest catcher, a messenger, and a hunting dog. The Airedale dog breed was acknowledged in 1879.

The Airedale Terrier is commonly called the “King of Terriers” as he’s the toughest, biggest of terriers. His coat is wiry, dense, and hard. He was initially used in Britain and Germany as a police dog and various American presidents have had this breed as a pet.

Intelligent, outgoing, and confident, the Airedale Terrier is not your average dog. Instead, these lively little guys possess a wonderful playful streak that delights their humans but can be intense for novice pet parents.

They need plenty of playtimes to exercise each day which might require some time outside your home. If these needs are met, then this energetic pup will become more than worth every second spent taking care of him: he loves nothing better than being around people while getting lots of pets himself.

Although the Airedale Terrier personality is normally has a mild manner, he will defend himself if challenged. He should undergo obedience training early on because he’s a quick learner but it’s vital to vary the training as he can lose interest easily. He craves exercise every day.

The Airedale is a fun-loving and affectionate dog with a playful nature. He can be stubborn at times, but those who have welcomed his independent spirit will find themselves smiling throughout their lives as they enjoy this comical breed’s company.

Airedales are great family dogs. All terrier breeds make excellent watchdogs and can be trained to do tricks. As a family pet, this breed is sturdy, but not too big, they like to play with older children,  and other dogs.

The Airedale Terrier is a strong-willed dog that needs an owner who will take the time to train it properly from puppyhood on or risk having a stubborn adult dog on their hands. Properly socialized at an early age, this breed will become your best friend for life. With their intelligence and playful spirit, Airedales make wonderful pets.

Airedales are loyal companions but they expect the partnership between both of you to be strong and equal. They have a humorous air about them so it’s vital that you have the same ability to view the funny side of all situations.

For example, your Airedale may grab your keys just before you do so you can go to work. Then he’ll run around your back garden, dodging you at every turn and daring you to come and get them back. Airedales never respond well if excluded from your family life and certainly won’t be happy if he’s either confined to the back yard or one room in the house.

Temperament is an essential thing to consider when adopting or buying your new pet. The type of temperament a puppy has will depend on many different factors, including heredity (genetic), training methods used, and socialization experiences gained since birth. To get a puppy with the perfect temperament, look for one who is curious and playful.

Airdale Terriers are a rare breed. However, they’re one of the most intelligent terrier types, so it’s essential to find a reputable breeder who knows how genetics work when adopting or buying this type of dog.  Pet store puppies often have unstable temperaments.

The best way is by checking larger shows like Westminster and contacting breed clubs. Remember, every Airedale puppy has its own unique personality.

Intelligent, outgoing, and confident, the Airedale Terrier is a wonderful breed with an intensity that delights humans. However, novice pet parents or apartment dwellers should beware as this dog has high energy needs for plenty of exercise and early socialization is vital.

Though first-time dog trainers might find them too much at times, if you can provide your home with enough space where they can run around freely, then there will be no problem whatsoever.

Airedales are clever dogs BUT it doesn’t mean they’re always obeying you. Whenever you call, they can find more important things to be doing. Your dog does want to work WITH you but not FOR you and that’s a huge difference. The way you train must keep this attitude in mind.

There are breeds that will happily repeat the same task as often as you want. However, Airedales are NOT one of those breeds. Repetitive drills won’t receive any enthusiasm from your Airedale. These dogs love showing how smart they are by doing something ONLY ONCE! They consider that they did as you asked, perfectly, the first time, and if you didn’t notice, then it’s your bad luck.

However, there are some Airedales with a much better attitude. They excel in anything you give them, whether it’s flyball, hunting, agility, obedience, therapy work, police work, search and rescue, and anything else you care to try. As an owner, you need to determine what it is that truly motivates your dog and choose dog sports you and your dog will enjoy.

The Airdale Terrier is an active breed that tolerates roughhousing well with older children. However, these high-energy dogs are not as tolerant of roughhousing as other breeds like Labs or Beagles.

They can be feisty and snippy with roughhousing kids, which is why we recommend waiting to add an Airedale to your family until your child has matured enough to have calmer interactions with dogs in general.

Dogs and older children appear to be perfectly suited. Sadly, most young Airedales are rescued from families where they have been abused by young children.

Common reasons why Airedales have been surrendered: Dog injured child, and makes her scared, dog bitten child or friend, the dog jumps on the child, knocks child down, play bites, a dog growls after being chased by a toddler. Dog left alone all day and night. Dog wants human food and growls when a child has food. Kids leave the door or gate open and the dog escapes.

Do Airedales Get Along With Other Pets?

It’s important to know that Airdale Terriers can be aggressive towards other dogs. Still, it varies from one dog to another. Their intense personalities and high energy levels make early socialization crucial.

Airdale Terriers are energetic, intelligent dogs with high prey drives. They will try to chase smaller animals like cats. These canines typically do not do well around other smaller pets.

How to Groom Airedale Terrier Dogs and Puppies

His coat needs regular stripping and brushing. Any Airedale owner knows that regular grooming is essential. A number of actions are needed. Brush his coat and undercoat twice weekly to get rid of all the dead hair. He also needs stripping or a haircut at least four times per year.

The majority of Airedale dog breed owners have a great professional groomer who looks after hair cuts so they’re done properly. A groomed, clean Airedale is a healthier, happier, four-legged family member.

Lots of people find Airedales appealing because, when they’re groomed, they look incredible. There are others who love Airedales simply because they don’t shed hair everywhere, as long as they’re meticulously groomed.

Proper Airedale Terrier Grooming involves many tasks. Your Airedale’s coat must be brushed at least weekly but daily is better. If you don’t, his coat will develop lots of mats and it may be difficult to free them. Once or twice a week, you need to check his teeth and ears for problems.

How to Trim an Airedale Terrier

Every six-ten weeks, he will need to be hand stripped or clipped. The majority of Airedales get clipped, at a rough cost of $50 to $70 per canine, and the price can vary according to where you reside. Only show dogs get hand stripped because it’s an enormous amount of work and can take two weeks to finish. As the new, darker coat grows back, the old coat is gently and slowly pulled free.

Airedales aren’t groomed to the same high standard at all grooming shops. Some do a bad job and it’s an ugly sight. If possible, it’s wise to learn how to do it properly yourself. You’ll save a great deal of money and it’s another way to spend quality time with your Airedale. You can grab a pamphlet that explains how to groom your dog yourself.

Is The Airedale Terrier Hypoallergenic?

The Airedale terrier breed sheds very little dog hair, but it is not confirmed they are hypoallergenic dogs.

Other than size, there aren’t many differences between Airedale males and females. The male stands 23 inches tall and the female is a little shorter. Airedale Terriers weigh between 50 and 70 pounds.

As an owner of an Airedale, you probably wonder about the Airedale Terrier lifespan. According to a survey about US dog breeds, the average Airedale lifespan is 10-13 years and some may live two years more than what’s anticipated.

The Airedale Terrier is a joyful, outgoing dog that will make the perfect pet for anyone looking to have fun. They are intelligent and confident but can be much more intense than first-time owners might expect them to.

Be sure to research this beforehand so you can find out if your new pup will fit well with your family and lifestyle. Other considerations include exercise needs, grooming requirements, food consumption, health concerns, size at maturity, and space restrictions in your house or apartment.

Considering these aspects could help ensure that adoption goes smoothly for all involved parties.