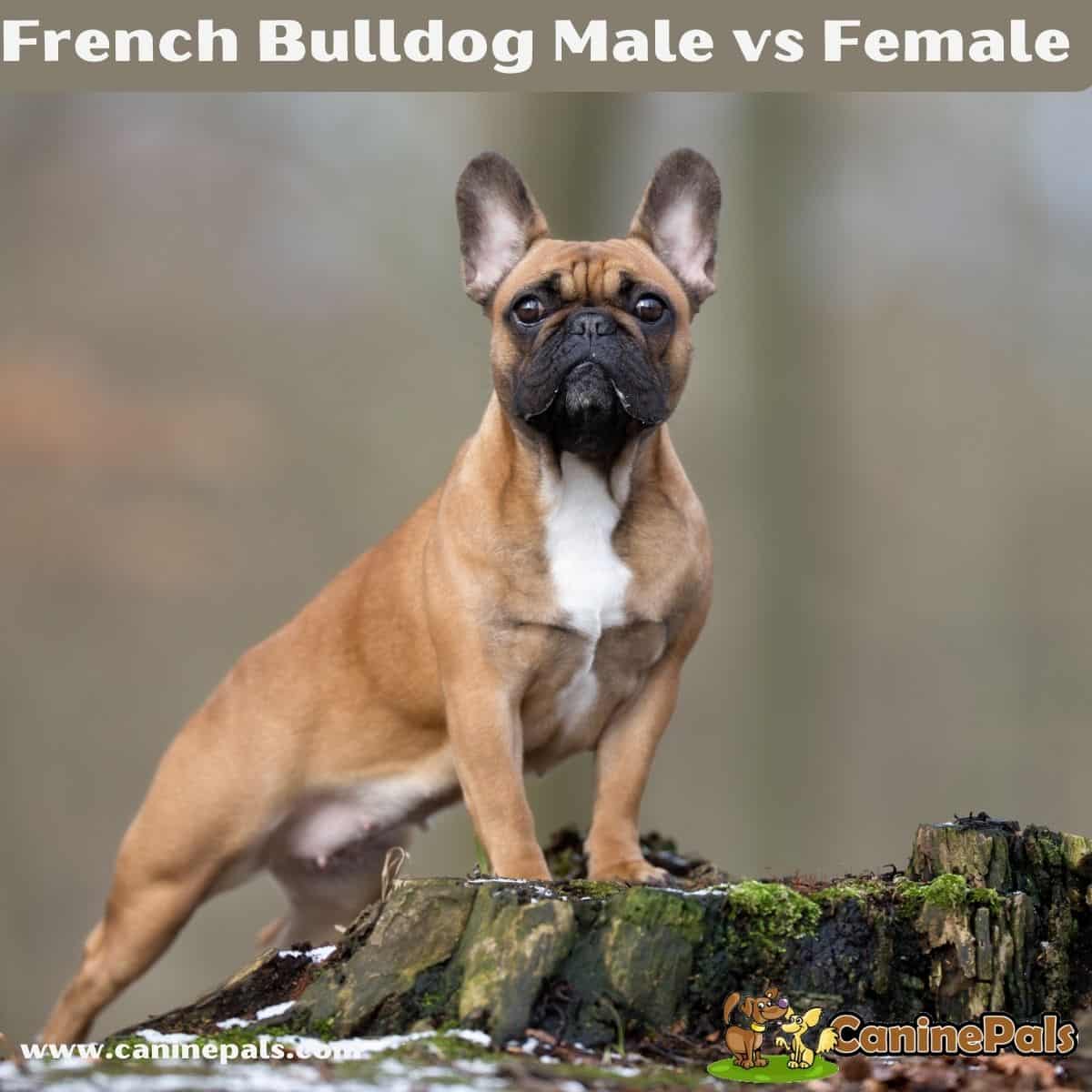 Male or female French Bulldog, or as most of us like to say, “Frenchie,” is a small, full-of-life pooch with a big personality. This goofy and joyful fella has quite a history of being a companion dog.

This article will help you answer all the questions that make you doubt a particular gender. Stick around, and learn all about your potential French Bulldog puppy.

Despite some common differences between male vs female French Bulldogs, gender should never be the sole reason to decide whether a dog will be a great fit for a family. We are not trying to clash that biological differences and surroundings can affect your snuggle buddy’s behavior. But judging every individual pup with the same mindset doesn’t sound fair-minded. Does it hooman 🐶?

The French Bulldog was bred by lacemakers in Nottingham, England in the 19th century as a lap pet. After the Industrial Revolution, he ended up in France and became popular there with wealthy American visitors. In the late 1800s, he became the French Bulldog. He’s often described as a clown in the coat of a philosopher.

He’s muscular and small and has a heavy bone structure. His ears are like “bat” ears and he has a short face. He’s an affectionate dog and not very boisterous, which makes him an ideal companion. He’s an indoor dog and needs air conditioning when the weather is hot. He’s good at warning when the postman is coming but is still primarily a lap dog. His coat can be brindle and white, white, fawn, or brindle in color. He doesn’t need much grooming or exercise. He’s 12 inches high.

Let’s look at their individual differences to choose between male or female French Bulldogs.

A male French Bulldog has an appearance similar to the mini version of an English bulldog. The main features that distinguish this small friend from other breeds are his large and erect bat ears. Compared to the female counterpart, your male Frenchie will have a massive head. You can clearly observe some heavy wrinkles just right above that cute little snot! Boop it!

Another feature that differentiates a male French Bulldog from a female Frenchie is its bulky-looking appearance. Male Frenchies are a bit heavier than female ones because they have heavy bones, which give them a stout look. Perfect for cuddling!

Here are some other physical traits of this goofy little fella:

Interestingly, some females have an appearance similar to male French Bulldogs. They also have a square head, bat ears, and loose skin. You won’t know the difference as long as you don’t have a peek at the private parts.

Ideally, it is believed that a female Frenchie should have a smaller head than a male Frenchie. But as we always say, not every pup meets the standard criteria for physical appearance due to genetics.

Here is a brief analysis of female Frenchie appearance:

According to American Kennel Club French Bulldog breeding standard, a male or female French Bulldog is not recognized if it weighs 28 pounds or more!

(You better not overfeed! 😉)

You may wonder what could possibly be so different in two dogs of a similar breed but with opposite genders. Well, we won’t disagree with you. Both male and female French bulldogs have a small difference in their temperament. Depending on your preferences, you might feel attracted to the qualities of a specific gender.

Male fur balls are famous for their playful nature. They also make bolder pets. The fido usually has a pretty even disposition. You can expect to find a friendly, affectionate, and well-behaved pal in this small doggie.

Here are some other behavioral attributes of a male French bulldog:

Most people believe that female Frenchies are easy-to-handle pals. Yes, there is nothing wrong with this statement. Females are a bit shy and have a more relaxed temperament than males.

Here is a general assessment of their temperament and disposition:

Dealing with Strangers and children

Male French bulldogs are extremely outgoing. It isn’t unfair to say they are the Social butterflies of the dog Kingdom. They love spending time with people. This temperament is the reason why they are not suitable as watchdogs. The same goes for females.

You may see your French Bulldog playing with strangers and jumping around with people they just met in the park. They enjoy the new company, and this behavior is completely normal.

Making new friends and giving everyone a laugh is one of their expertise. This trait makes them great pals with children. They consider them as their age fellow. Kids are like a friend to them who doesn’t need much protection. So, they don’t display parental instants.

Remember, as the male pups are mischievous, they may start bullying a kid if they feel he is fearful. Some may display signs of aggression if not introduced properly. It’s better to remember that male French bulldogs are Alpha dogs, and you need to help the child and male Frenchie develop a strong bond. Make sure none of them teases each other.

When it comes to interacting with strangers, a female Frenchie is not much different than her male counterparts. This goofy fur ball has so much love to give, not just to her favorite human but also to everyone. You can never have an uninterrupted walk around the block as this cutie will love to befriend everyone on the way.

This charming pup craves everyone’s attention. In case your female Frenchie is not approaching anyone instantly, be relaxed. She is just trying to figure out whether the upcoming person is a threat or not. Due to their maternal instant, they are very kids friendly. Female Frenchie doesn’t goof around much, so there is no chance your kid will get knocked out by her presence.

Many breeders and pet owners have highlighted that training a male French Bulldog isn’t an easy-going activity. Their playfulness makes them hard to train. The dominant nature also plays a role in making the training sessions way more challenging. You may find your fido having a power competition with you. If you are really into this pup, you should look for some useful training tips or seek professional advice on training a French Bulldog.

You will be at ease to know that training a female French Bulldog is easy as ABC. They are very responsive and can learn tricks pretty quickly. This ease of trainability is because they mature before male ones. But still, if it seems hard to train this beauty, it’s never too late to seek professional assistance.

Should I Get a Male or Female French Bulldog?

So, still unsure which one to pick? Don’t worry, no one will blame you; we can’t decide anyways!

Choosing a male or female as your pal for the rest of your life is hard because both have unique personalities with some lovable traits. And honestly, most of these traits are pretty similar.

If you want an independent-natured, goofy, and mischievous pal, go for a male one. On the other side if you are more into a mild-mannered, snuggly, sweet, and a bit calmer pet, then a female Frenchie is your best choice. But here’s a plan, rather than getting involved in the male vs female Frenchie war, why not adopt both?

Thinking about it? Yes, you should.

So, is there a difference between a French bulldog male and a female? In short, yes. Female French Bulldogs are smaller in size and have less muscle mass than their male counterparts, and they also typically have a more “daintier” appearance.

Male French Bulldogs are larger with more muscle mass and are more rugged-looking. While these generalizations may not hold true for every dog of each gender, they provide a good starting point for understanding some of the key differences between French Bulldog males and females.

Frenchies are famous for their lovely button eyes and cute pointy ears. This pooch adores spending time with its human pack. There are many reasons to like this sweet soul, but one thing that brings them to the limelight is their adaptability to small spaces and apartment life.

And, it will be completely fair to say that their personality is the literal definition of cheerful as they are super entertaining, highly affectionate, and can put a big smile on anyone’s face.

So Whether the needle of your decision points to male or female Frenchie, make sure you are not missing out on a golden opportunity of making lifelong memories with a lovely pooch just because of its gender.

Have you had any experience with French Bulldogs of different genders? Let us know in the comments!