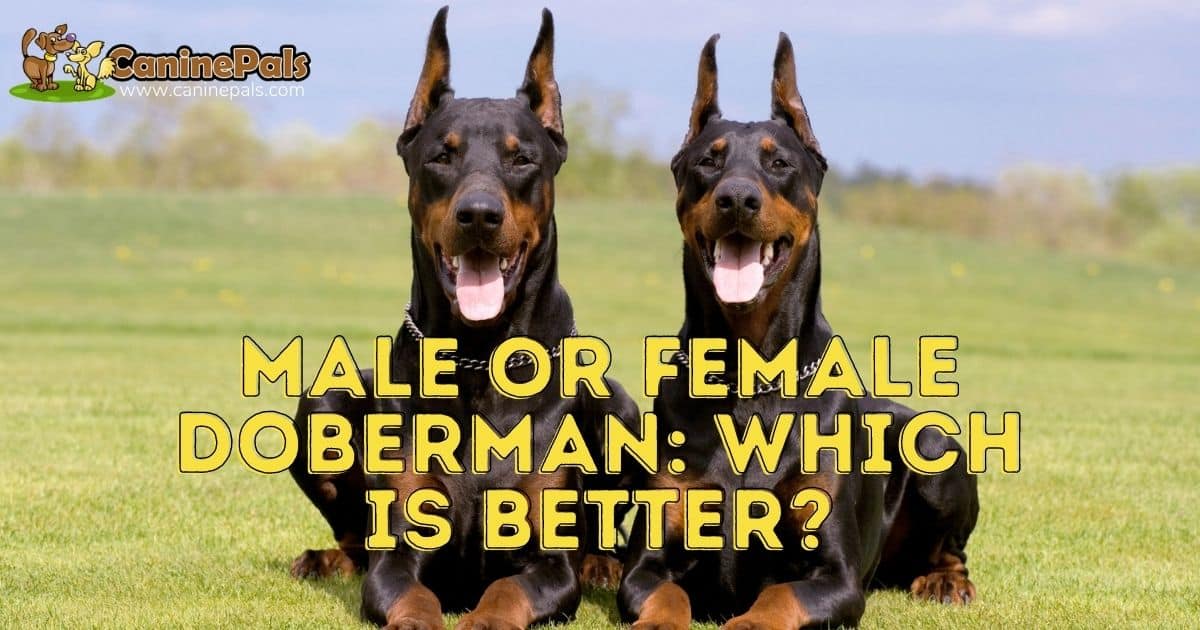 Nobody ever could conclude the match between Doberman Pinscher male vs. female. So what if we can’t bring the debate to an end? We can compare the two genders and decide which suits our lifestyle the best. Right? Let’s cut to the chase and start the analysis.

A male Doberman or a female, both genders have their own attributes. Male Doberman dogs are aggressive and belligerent. Meanwhile, female Doberman tend to have dominating personalities – stubborn and territorial!  If you are willing to bring a Dobie home, gender matters. There are some critical differences between their behaviors.

So, when in doubt, do the following:

Once you pay close attention to their characteristics and attitude, you’ll find decision-making a lot easier.

To help you perform a critical inspection of both genders, I have prepared a lowdown of their similarities and their differences. Let’s start right off the bat.

If you try noticing changes between a male and female Doberman pinscher through pictures, sorry, you might not be able to spot the differences.

For a better analysis, you must examine them in person.

Next to the physical stature, another characteristic that sex hormones determine is temperament.

When it comes to aggression, both genders are somehow aggressive in their distinct ways. If that statement somehow sounds vague, let me define to you what I mean.

As adults, Male Dobermans are more likely to show aggression than females. That’s because of their guardian nature – which is a plus point to some extent. In puppyhood, female puppies appear to be more aggressive than their male littermates. Now, why is that so?

Female pups are smaller in size than male puppies. So, they have to be a little more aggressive to avoid being pushed by their larger cognates. That’s a kind of self-protection.

Same-sex aggression is also another factor. A study released in a journal by American Veterinary Medical Association states that “79% of aggression issues that happened in the same house were between same-sex dogs. And among those 68% were females.”

For a high level of trainability, you need to find two qualities in your dog.

And in Doberman, male or female, you’ll find both. However, they have their own learning pace that is totally defined by their genders.

That’s all that makes a dog docile, isn’t it? But here’s a catch… Although female Doberman stand out in trainability, they are unwilling to accomplish task after task.

All Doberman Pinschers, be it a male or female, are great guardians. They were bred to be guard dogs.

Various factors affect the guarding skills of Doberman Pinschers regardless of their gender. Such as:

Let’s see how male vs. female Doberman fare in safeguarding.

Looking for a Doberman doggie to protect your property? A male Doberman is the best option.

Male Dobies are energetic, so they are better at protecting your home, property, or any territory. Males are, therefore, considered the best for overall guard work.

As I mentioned earlier, females get attached to one person, specifically. Therefore, they are more likely to excel in personal protection.

Female Dobies mature at quite a young age. Hence, they can start safeguarding their owner earlier than males. You’ll find them more agile and more suspicious towards strangers.

Male Dobermans have a welcoming nature for strangers. They would play and run with them immediately. Take them to public gatherings and introduce them to your friends, they will be happy.

Male Dobies respond well to strangers within their familiar location. Otherwise, they will be reluctant to get into a harmonious relationship with strangers at a new place.

Do you expect female Doberman to get by the strangers quickly? No way!!

When it comes to getting along with strangers they are way more careful.

Male Doberman can foul up anytime.

When their freewheeling nature is good to mingle with strangers, it can be extremely risky if you have smaller kids at home.

Male Dobies enjoy running, bouncing, and rolling over. And this habit can pose a serious risk to younger kids. Especially, when your dog has grown to be 100 lbs. in weight.

Besides causing accidental injuries to your kids, male Dobermans are great with children.

If you ask to recommend only one gender as the best family companion in male vs. female Doberman, it would be a BIG challenge.

Pro tip: If you want to keep more than one Dobie at your home, try going for opposite genders or neuter them. Another way is to keep the dogs with a significant age gap.

The normal lifespan of a Doberman is 10 – 13 years. But during their lifetime, Dobermans may face many health risks, just like any other dog breed would.

However, there are some exceptions. How do these other health hazards affect the Dobies concerning their gender? Let’s see.

According to an abstract of the American Veterinary Medical Association,

Male Dobermans are more disposed to develop Dilated cardiomyopathy (DCM) – a deadly heart condition prevalent in Dobermans – at some point in their lifetime.

Furthermore, they also are more susceptible to bone, joint, and hip problems than females.

The culprit behind this might be their bulky stature.

Being slimmer and smarter makes a female Dobie less prone to multiple diseases. Bone, joint, and hip problems, for instance.

Some females may acquire Chronic Active Hepatitis (CAH) between the 4th to 6th years of their age.

Benefits of Neutering a Doberman

Neutering is the most effective way to alter the behavior of the Dobermans.

No, it doesn’t change their key personalities, but it does bring some observable changes.

In Male Dobermans, neutering lessens their urge to hump humans, objects, and other animals. It diminishes their aggression. Their activity level gets down.

Female Dobermans, when spayed, will be less aggressive.

As they won’t experience hormonal changes, so there would not be any annoyance. They would neither be peeing frequently nor will they eliminate the bloody discharge.

You might not come across any significant difference in puppy prices of both genders. But yes, a slight difference is there.
Some breeders sell male Doberman pups at a higher rate as compared to female pups. Just because they are better guard dogs. Still, you’ll find Doberman pups – male or female – in the same price range.
In the case of an American Doberman pup, the cost falls somewhere between $1,500 – $2,500.
Want to buy a European Doberman? You may expect a cost of $3,000 to $4,000.

Male or Female Doberman: Which is better?

With that, we have come to the end of our blog post. And, announcing a winning gender is still a tough decision. However, go for a male Dobie or a female; they never fail to surprise you.
Do you need a sociable four-legged friend? That’s a male Dobie.
Want some emotional attachment? That’s a female’s attribute.
Can’t decide between the two? Get a pair – No joke! They are just that good!
Whatever gender you choose, socialize it well and put efforts to train it well. This is the secret to a happy Dobie life, folks!
Copyright CaninePals.Com. All Rights Reserved.