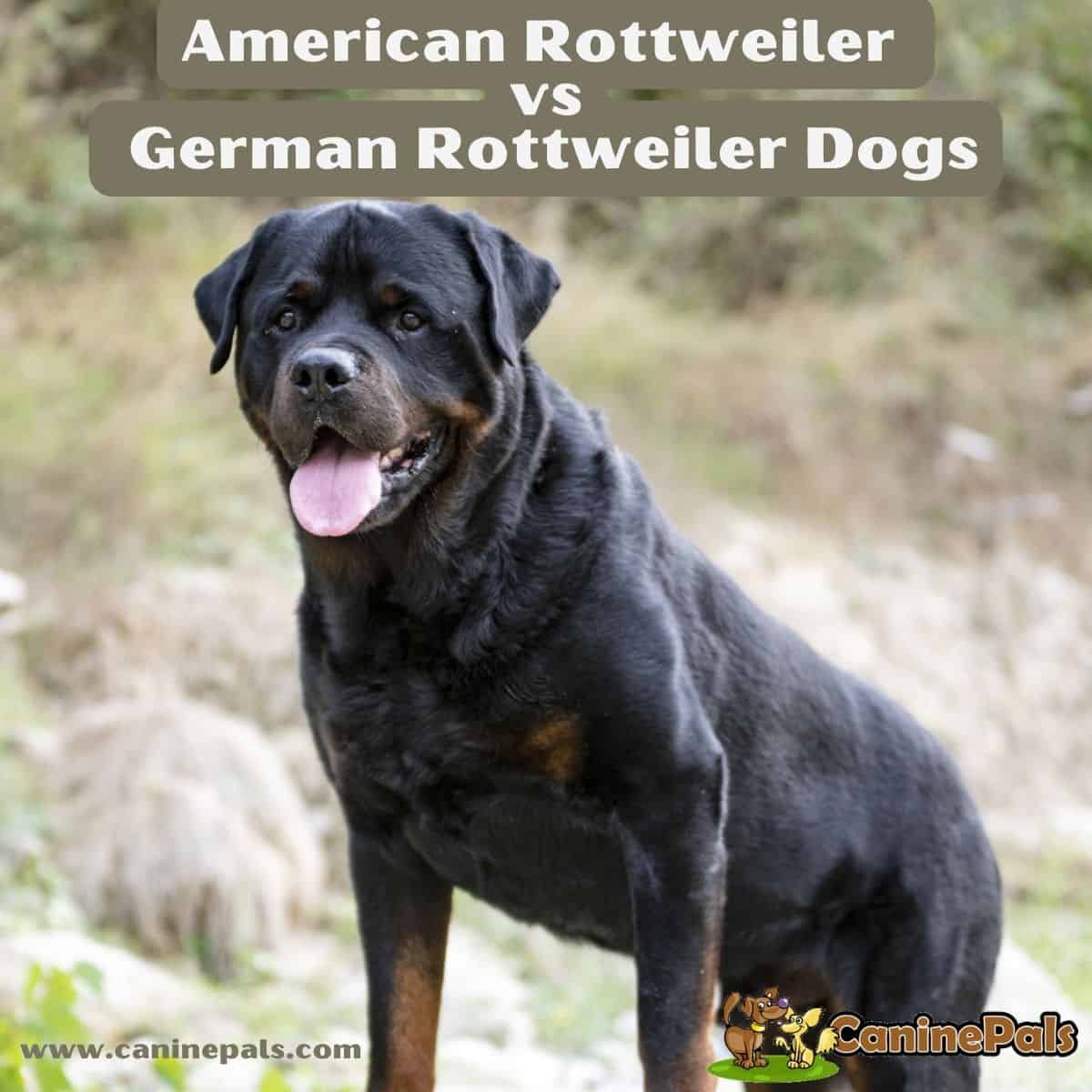 The black and mahogany coat, wide head, broader body, alert ears, and dark-brown almond eyes; none can have these intimidating appearance traits other than a Rottweiler! When you see them, you instantly know it’s a Rottie.

The article provides insights into the deal between a German Rottie and an American Rottie or if there is a difference between them at all.

Rottweilers are deemed to be one of the oldest dog breeds. Their origin dates back to Roman times. The Romans used them for their protection and driving their cattle. Rottweilers then marched with the Roman legions over the Alps.

The Rottweiler originally followed the Romans and their herds when they invaded Europe. His guarding and controlling instinct was noticed by the Germans and bred for these traits. As these needs were reduced, he almost became extinct. In the early 1900s, his breed was formally acknowledged.

In Rottweil, the Rottweilers mixed in a natural crossing with the native dogs. In fact, Rottweil is the city where their name comes from. The Rottweilers served great purposes during both World War I and the Second World War. They were used as police dogs, guard dogs, and for driving purposes.

Various Rottweiler clubs were founded in Germany from 1914 onwards. These clubs then merged later in 1921 to form ADRK (Allgemeiner Deutscher Rottweiler­-Klub), the General German Rottweiler Club. The ADRK has worldwide recognition for being the home club of Rottweilers.

The American Kennel Club (AKC) recognized the Rottweilers in 1931. During the mid-’90s, the most recognized dog breed by AKC was Rottweilers. Rotties stood among the top 10 most popular breeds by the AKC in 2017.

If your Rottweiler loves apple pie and appreciates the taste of vanilla ice cream, chances are he’s American, and if your Rottie boasts thick bones and barks in a German accent, his bloodlines come from Germany!

In fact, the Fédération Cynologique Internationale (FCI), the world’s largest canine organization, does not use the territorial prefix like American and German with Rottweilers at all.

However, there may still exist some slight appearance differences between the two. The standards set by the AKC (American Kennel Club) and the ADRK (Allgemeiner Deutscher Rottweiler­-Klub) also help to distinguish between the German vs. American Rottweiler puppies.

The ADRK has some strict rulings to register Rottweilers. They have a set of standards, and if any Rottweiler pup fails to meet those standards and does not pass the Breeding Suitability Test, it is not considered a true German Rottweiler.

The Suitability Test checks the dog for specific areas. Those areas include:

A Rottweiler or its subsequent puppies will not qualify for registration if any flaws are found in the areas mentioned above. The only goal of the ADRK is to produce a better breed, and since tail-docking and ear-cropping are banned in Germany, the Rottweilers having these flaws are disqualified too. The ADRK also requires the Rottweiler parents to have a certificate that refers to potential genetic defects or diseases.

AKC follows somewhat the same standards as that of ADRK to register a Rottweiler. The Rottweilers are tested and checked for the areas listed above. And any flaw in either appearance or temperament will lead to the disqualification of registration of Rottweiler.

This allows many profit-seeking breeders in the US to breed a Rottweiler that is deviated from the original breed. This is certainly not true for all breeders. The purpose of providing the information is to make you aware of deceit.

The Fédération Cynologique Internationale (FCI) provides a description standard for how a Rottweiler should look without using the regional prefix like German or American.

They individually describe each appearance trait in detail.

The AKC also counts rust or mahogany-colored markings that are not on more than 10 percent of the Rottie’s body. The AKC also specifies a dot above each eye on the inner brow ridge, on the cheeks, and on each side of the snout.

These are powerful canines and are considered working dogs. German Rottweilers are more striking and look intimidating with their broader and more muscular bodies. Their thick bones and blocky heads make them look impressive.

Another trait that distinguishes them is their size. The comprehensive differences are discussed further.

When it comes to size analysis of German vs. American Rottweilers puppies, both AKC and ADRK have their set of standards. They come in all sizes, i.e., small, medium, and large. The male dogs are relatively bigger than the female dogs.

The AKC has provided a general size of the Rottweilers for both male and female dogs. Their standards are:

ADRK standards are incredible when it comes to Rottweiler sizes. They have split their size as small, medium, large, and very large. Since their aim is to produce perfect Rotties, they provide their breeders with well-guided information.

Although their temperament greatly depends on how they were raised and socialized by the breeders and owners, in general, they have a placid attitude. Besides, while registering the Rotties, they are tested for their temperament as well. The more their temperament deviates from their natural temperament, the more is a chance they won’t get registered.

What Happens to Rottweilers When Breeding Standards are Lowered

If breeding standards are lowered, the dogs may deviate from their natural physical appearance over time. Their temperament is also highly affected, and health issues may arise as well.

There are some people and organizations responsible for the categorization of the breed. In order to preserve the breed, they set up their own standards and deviated from the originality of the Rottweilers. Some of the people to be held responsible are:

Many kennel clubs tailor their own standards to breed the dog. This has resulted in extreme variation and deviation.

Sometimes, the judges of the dog shows might be learning the ropes of the breed specification. Without having comprehensive knowledge, they may sometimes incline towards a trait that is not associated with the breed. That results in breeders working on transforming the dogs.

Dog breeders play an important role in transforming the dogs and deviating them for their profits. They work on changing the breed’s characteristics and temperament for their personal gains.

Yes, dog owners are not excluded from the list of people who are supposed to be blamed. The reason is their own demands for a dog to be bred in a respective manner because they think it’s cool.

Which One is Good for You?

Whether American Rottweiler or German Rottweiler, they both need proper training, socializing, and physical and mental stimulation. They can be robust players if not trained well.

If you think you cannot manage time to train your pups, or you’re too lazy to do that, a rottweiler is not recommended for you. But if you think your Rottweiler won’t get neglected in your daily chores, they are the perfect family companions because of their lively yet placid temperament.

Besides, they may develop severe separation anxiety. If you stay too much outside the home, then as well, a Rottweiler isn’t for you.

Price Difference Between the American and German Rottweiler

The price of the Rottweilers depends on their breeding—the more rigorously bred, the more the piece. The breeders conforming to AKRD standards offer puppies at a higher price, while the breeders registering their pups with the AKC have a relatively lower price.

To give an estimate, a Rottweiler puppy can cost anywhere between $500 to $4000. The less you pay initially, the more you’ll have to pay later for their training as well as to deal with their health issues. When a puppy is cheap, the chances are that sub-standard methods were used for breeding them that may cause health problems in the future.

Whichever Rottie you have, if it is purebred, we are pretty sure you are in for a great time of your life. With an affectionate, loyal, obedient, mild, calm, trainable, yet fearless temperament, get ready to get your socks knocked off!