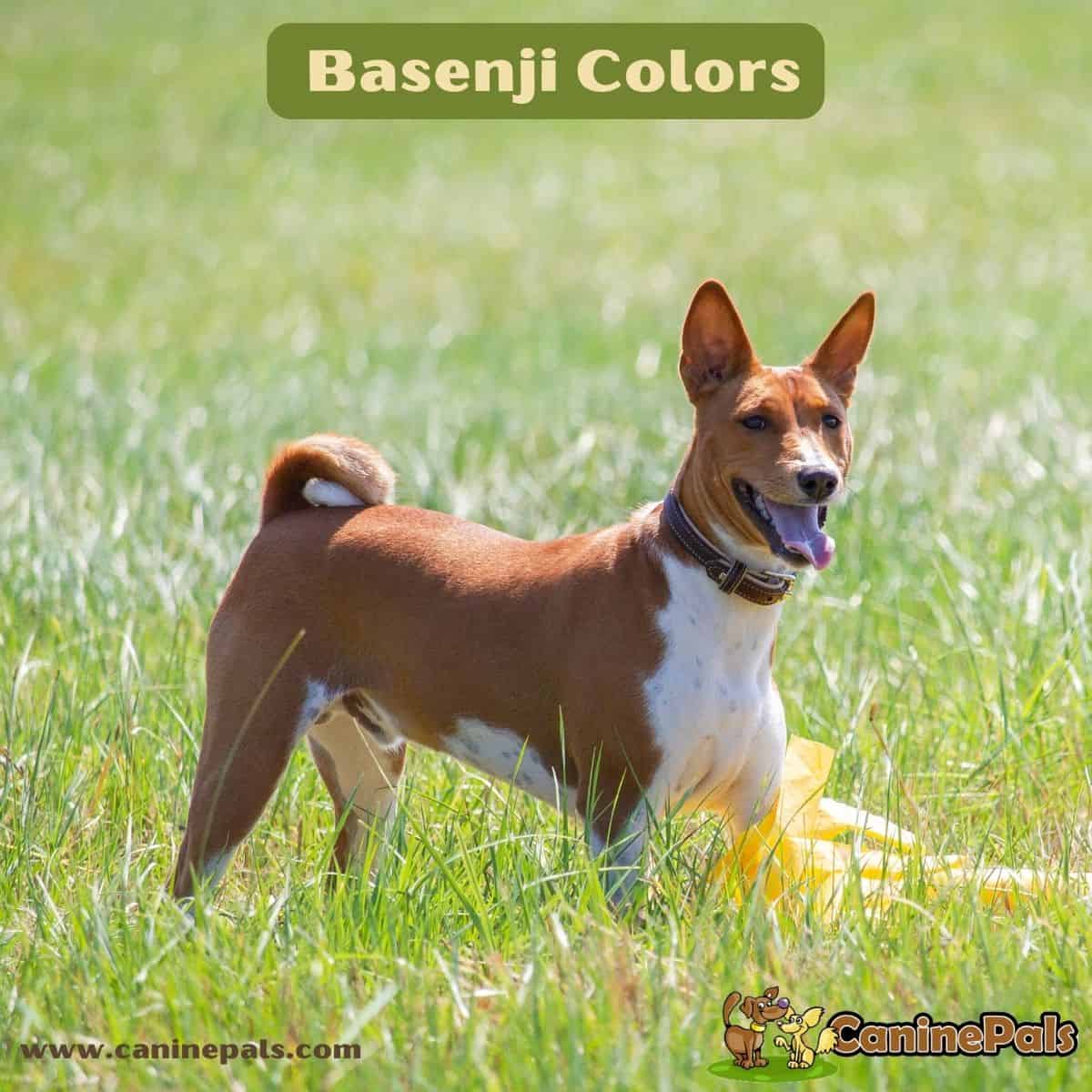 Basenji is an ancient breed of canine usually used for hunting. They are known as “the barkless dog” because their larynx is shaped, preventing them from making the typical canine barking noise. However, the Basenji is not completely mute and has a characteristic yodeling sound. This loving dog would cheerfully use these yodels to communicate with their owners all day long!

Anyone who sees a Basenji is positively affected by their loveable, amiable, and intellectual nature. They have entirely unmistakable pointed ears and lean, muscular bodies.

This breed comes in various colors, the most usual Basenji colors are the famous red or orange ones, but there are white, black, and tri-colored Basenji too.

Before hopping onto these dogs’ color theory, let’s look at some amazing things about it.

The Basenji is possibly one of the oldest domestic dog breeds; they were used for hunting and which could be why he doesn’t bark. It is quite possible that hunters liked this quiet dog not to alert their prey. The Basenji can bark, just like his wolf cousin in the wild, although he often only does it once before going, completely silent. He is thought to be only a slightly tamed dog and is not preferred as a Pet. He also has a different metabolism than any other domestic dog, and unlike other house dogs, the female Basenji only cycles once a year, much more like wild canids.

Westerners first came across Basenjis in the 19th century in the Congo region of West Africa. The dogs were trained there to flush wildlife into nets, carry supplies, and alert trail users of dangerous creatures. Some African communities valued a good hunting Basenji because of the dog’s resourcefulness and inventiveness.

Initially, attempts to introduce the Basenji to Europe were unsuccessful since the imported canines all passed away from illness soon after arrival. In England and the United States, the first successful importation occurred in the 1930s.

In 1942, the Basenji Club of America was established, and in 1943, the American Kennel Club approved the breed. The first Basenji to be registered with the AKC was Phemister’s Bois in 1944.

Basenji is a hound, which means he is independent, intelligent, tender, and watchful. Being a sighthound, he will chase anything moving that attracts his attention, including cats, squirrels, and rabbits. He is not the type of dog who will immediately comply with commands. He needs to consider these and determine whether or not he truly wants to comply with your request. That is one reason why Basenji is not your typical domestic pet.

The Basenji needs daily activity because it is a hunting dog. While some Basenjis may get by with a daily stroll, others need more vigorous exercise. Basenjis that have grown up around another Basenji frequently spend their time exhausting one another.

The Basenji is not a breed of dog that should be kept in the backyard unattended. He’s a skilled escape artist. Therefore a Basenji left unattended will soon be a Basenji gone missing. If you give him a few daily 30-minute walks or play sessions, he might do fine in an apartment or condo.

Never leave your Basenji unattended unless you’re in a completely enclosed space, and never rely on any fence to keep him in its confines. He will use a chain link as a ladder, and a wood fence will only prevent him if you remember to place the smooth side toward the yard where the dog is and then cover it with an electric wire.

What makes them Unique?

Basenji have the propensity to leap vertically into the air stealthily, to locate the game in the thick grasslands of their peripheral vision. These traits make Basenjis highly sought-after hunters.

The breed even has an African name that loosely translates to “the bouncing up and down dog.”

Now, Basenjis are primarily kept for breeding, displaying, and companionship. They are known for their graceful speed, enormous and upright ears, curled tails, and glossy, smooth coats.

Ever wondered how many Basenji coat colors are available? Here, red and white basenji, black and white Basenji, tricolor, brindle, and white are typical of Basenji coat colors. Although Basenji is conceivable and frequently from Africa, other colors like cream and white or blue tricolor are still uncommon in the United States.

Regardless of the breed, the topic of coat color may be very perplexing.

As we walk you through the conventional Basenji colors and explain why most lovely, natural, alternate colors have disappeared in the domesticated Basenjis of today, we’ll try to keep things as simple as possible.

The four most frequently seen colors—red, black, tricolor, and brindle—are regarded as standards even though the AKC breed standards make no mention of color disqualifications.

Dogs of unusual colors can still be registered, bred, and displayed, albeit the judge may penalize them in the show ring for their color.

The feet, chest, and tail tip are usually in the standard white color for most Basenji dogs.

White legs, a white collar around the neck, and a white blaze on the face are all suggested but not needed. There is so many more color in the coat than white.

People typically see a Basenji in their usual red and white when they think of these dogs. Many Basenjis have this lovely coloring, and numerous shades of red may be found within it.

Even though many individuals unfamiliar with the breed would probably characterize the red as orange, beige, or dark tan, it is described as a deep chestnut red that is rich and bright in saturation.

The sections of red are clearly defined; they do not at all “bleed” into the white, as is the case with all Basenji colors. Unwanted colored hairs are also occasionally found among the coat’s white hairs.

In this litter, the puppies born from mating two pure-for-red (homozygous for the trait and lacking any other hidden color genes) are also pure-for-red.

The white on Basenjis with black and white markings is bright and distinct, while the black is glossy, deep, dark, and pure.

Black is a dominating color; thus, black and white puppies are flexible in color as long as one parent dog is of multiple colors. All the puppies born from a white and black Basenji union and another black and white would be of that color, though they might be carriers of another color if either parent was.

Due to black dominance, most black and white Basenjis are heterozygous for the trait, which means that they carry a recessive color that was not manifested.

The tri-colored Basenji looks very unique and wonderful. The typical white patches are still there, but the majority of the coat is a stunning deep black with extra chestnut red coloring that is typically found on the eyebrows, cheeks, inner part of the upper legs, the base of the ears, and inner ear.

You’ll get a better sense of what tri-colored Basenjis look like if you can see the color pattern of a Rottweiler and then put in the white Basenji patterns. Basenji enthusiasts affectionately refer to black, white, and tans as “tris.”

Brindle and white Basenji still have the customary white markings, but instead of having solid red markings, they have distinct black stripes as a backdrop of chestnut red.

Mating two brindles or brindles can produce red and white brindle puppies to a tri. But if two tri-factored brindles were to breed, the resulting litter might include reds, brindles, tris, and trindles.

Fun fact: It took a unique importation initiative in the late 1980s for brindles to start showing up in America.

With the exception of trindles, which are seen very frequently, the standard colors are unquestionably the ones that are most commonly seen on purebred Basenjis. While entirely appropriate, other hues are now hardly ever seen.

However, it is noteworthy that alternate hues are frequently found in Basenjis residing in Africa, and slowly some of these dogs are being imported to the U.S. in an effort to revive these natural colors in American Basenji stock.

Although the Basenji Club of America now only includes the Basenji breed’s standard colors, the AKC does recognize the following colors as appropriate. Many members of both groups want to see the breed’s alternative colors used more frequently.

Although for AKC showings, dogs with this pattern would be regarded as tricolor, a black, brindle, and white Basenji is a tri-colored dog with brindle markings in place of the red and is frequently referred to as a trindle or a brindle-pointed tri.

The Basenji Club of America claims that a trindle recently took home the best-in-show honor at an all-breed dog show, despite the fact that some breeders dislike this coloration.

Breeders that favor this pattern frequently cross a trindle with a tri, a tri-factored red, a black, or a tri-factored black to create litters with a mixture of trindles and conventional colors.

As you may expect, cream and white Basenjis have a light cream to pale yellow tint instead of the chestnut red coloring.

Cream and white was a prevalent color pattern among the earliest imported Basenjis, but breeders did not like the color or the light-nose leather and greenish eyes that went along with it. They used selective breeding to eliminate the color and came very close to success. As a result, you could hardly ever see this unique combination in a Basenji.

In addition to the typical white patches, Basenjis with this color pattern also have a blanket of diluted black (referred to as blue) with cream highlights. Because these variations of tri-coloured Basenjis had the cream gene, they also started to go extinct as early breeders tried to eradicate the cream hue.

White and dark wood color is a rarity. It is basically the red and white Basenji but with a twist. Due to the scattered black hairs throughout the red section, Basenjis are much darker in color than conventional red and white dogs. Because of this unusual color pattern, there aren’t many images of it, and the ones that do exist are, regrettably, in black and white.

Sable and white Basenji feature the typical red and white pattern, but the red hairs have black tips, giving the dog a completely different appearance. This color pattern is known as sesame in Shiba Inus.

Markings on a Basenji

The AKC permits brindle markings, of course, but it also allows black markings, such as a black saddle over the ribs and capped markings, even though these are less prevalent than the other colors.

If you decide that a Basenji is the right dog for you, be prepared to spend some time on a breeder’s waiting list as they are one of the rarest dogs—ranking 84th of the 155 breeds and varieties—that the AKC recognizes.