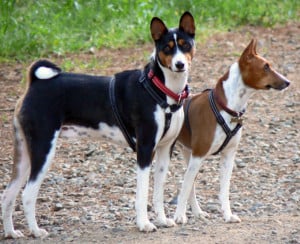 The Basenji is a hunting dog that comes from Africa but was originally used as a present for Egyptian Pharaohs. The Basenji was brought to England in 1937 and to America in 1941. He’s often nicknamed the “barkless dog” because he only makes a sort of yodelling sound when he’s excited. He can be coloured black, red or brindle, but always has a white chest, feet and tail lip. He has wrinkles on his head and a high curly tail.

The Basenji is playful, agile and moves easily because he’s muscular. He’s independent and often aloof. He works out of sight of the hunters and is guarded when meeting strangers. He only needs minimal grooming because his short coat doesn’t have a normal “doggy” smell. He weighs 22-24 pounds and is 16-17 inches high.