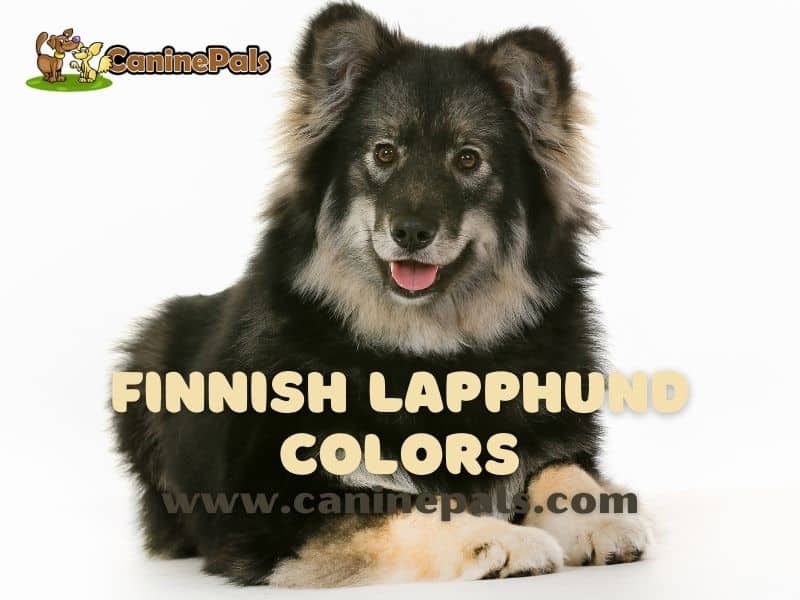 Do you find the Finnish Lapphund colors fascinating? How one can resist the wonderous soft coat and attractive colors of this herding dog breed. Let’s explore how Finnish Lapphunds vary in terms of their coat color and patterns.

Finnish Lapphund breeds are known for their powerful herding instinct. They are calm, friendly, affectionate, intelligent, focused on work, and good at working in rescue groups and shelters. Their habitat makes them great survivors of extremely cold climates. A key to keeping them happy is to take them for walks.

Their origin is from Lapland, which is on the north side of Finland, where they were kept for the herding purpose of reindeer by the “Sami” nomads. To date, Finnish Lapphunds are being used to herd livestock in farms and in shelters because of their exceptional obedient attitude and agility.

If you are okay keeping a dog with a profuse coat whose grooming won’t bother you, a Finnish Lapphund is for you! They have a long and coarse outer coat that covers an undercoat that is dense and soft. The skin has a vast range of colors, from the tones of white and red to brown and black.

Coat Colour combinations like black and tan are also found in the Finnish Lapphunds. Their size varies from 19 inches in males and 17 inches in females. A male or a female Lapphund can weigh from 33 to 53 pounds.

This article is all about the Finnish Lapphund colors, their temperament, and habitat. Give it a read if you are interested in bringing a Lapphund dog home.

Temperament Of The Finnish Lapphunds

Finnish Lapphunds are smart, naturally submissive, and love pleasing their owners. In addition, they are great companions for children due to their likely feature of sharing high energy with them. Lapphunds are the most famous breeds of Finland and have also gained fame all over the U.S.

The major reason for their fame is that they have inherited genes with exceptionally herding abilities. They herd sheep, cows, and other livestock and stubborn animal-like reindeer who have hooves. They are super quick, dauntless, and agile with an impressive startle reflex, and they use all of these traits in herding a reindeer if they get stimulated.

They tend to bark more than a usual pet. This personality trait of Lapphunds can be challenging at times, especially when you bring a new Lappy home. They bark a lot to control the herd. However, if observed from another perspective, their barking nature makes them excellent watchdogs.

You need to train your Lapphund for when not to bark, such as if there is an arrival of the guest or when they are alone in the room. They are often referred to as the thinking breed as they are strong-willed, great athletes, dexterous, good at tracking.

Finnish Lapphunds share phenotypic similarities with the Samoyeds, Siberian Huskies, and Australian Shepherds, but their breed is entirely a distinctive one. They are courageous, tend to stay in packs, and can survive extreme temperatures. In addition, their obedience and adaptability make it easier to train them and adopt them as affectionate family members.

Coat Color, And Patterns Of A Finnish Lapphund

Nature has given this dog breed a great color scheme. Out of the wide variety of their coat color and patterns, Finnish Lapphunds’ patterns are identified as:

Brindle – Brindle patterns refer to the dominant inheritance of stripes on the coat. This pattern is seen in the sable dogs.

Saddles – Dominantly tan or a brown dog with black patterns over the sides and back like a German Shepherd.

Irish Spotting – Dominantly white with marking of another color (maybe black or brown) that specifically covers the lower limbs, back, neck, and chest. The coat color dominantly makes the dog white Finnish Lapphund.

Based on whether they have inherited a recessive colour or one with genetic dominance, Finnish Lapphunds can be:

They are referred to as Black & Tan or Black & Cream. Black & Cream Lapphunds have a paler point. These coat color patterns are most commonly seen in this breed. Lapphund puppies may not show these markings and are not recognizable as tanpoint. Their color eventually emerges with age.

Brown & Tan Lapphunds are the counterparts of black & tan. Shading and markings vary from brown to orange to deep chocolate shades.

They have dominant tan point markings, and they come in variations of black, brown, and cream, having gray hair shafts giving them a wolf-like appearance and often referred to as Finnish Lapphund gray. The wolf sable coat color is also known as “Agouti.” Their shades may vary from black to pale silver with combinations of paler, deep copper, and cream-colored legs. The face is quite dark with small markings over it.

The wolf sable is challenging to be recognized as adults from the brown points. They are similar to wolves, but their dominant brown color distinguishes them from the wolves. Their color is mottled with shades on their hair shaft, mostly on the head region. Unlike the tan points, the brown wolf sable puppies are more recognizable.

Sables are named to represent multiple colored hair shafts of Lapphunds. Black sables specifically have hair shafts with black tips, and they are differentiated from “Creams” by this feature. But the blacktip fades away and turns into gold as the puppy ages and becomes an adult. The blacktip only stays around the ruff and tail. The nose pigment in black sables stays retained, which is a recognizable feature of black sables.

Unlike a black wolf sable, they have a brown base without black tips on the hair shaft. Instead, their hair shaft has a brown tip that fades away in adulthood. This makes it difficult to distinguish between an adult black sable and a brown sable. Pigments of the nose, eyes, rims, feet, and lips remain the prominent distinguishing features.

Finnish Lapphund colors black and brown in solid are called the recessive ones. Sable, tanpoint, and wolf sable have the recessive genes of black. These dogs do not contain any markings on their legs and face and are dominantly black. Puppies can be recognized with fully solid color throughout the body with darker spectacles around the eyes.

Domino Lapphunds are rare. They are born with a striking mask, deep eyebrows, and a white stripe on the face that fades away in adulthood. Domino black is a miscellaneous color of Lapphunds that varies from silver, gray, and copper all over the coat.

It’s a pigment that hides all colors and patterns on a Lapphund. Only Irish sightings or white markings are visible. It is therefore often referred to as a covering. The black factored cream Lapphund dogs may look white or deep apricot in color. They always have a faded snow nose as a distinguishable feature.

The recessive gene that dilutes (fades) the black pigment into the silver shade is called the dilute gene. Such dogs are referred to as blue, who are rare Lapphunds. Blue with dilute brown Lapphunds who have short coats are vulnerable to developing certain types of skin conditions.

They have a similar dilute (fading) gene as the blue ones. The difference is that they affect genetically brown dogs instead of black ones. It’s a pale silvery fawn shade, and two recessive genes are involved in creating this phenotype. Lilacs with dilute browns are very rare Lapphunds who dog enthusiasts can luckily see.

Finnish Lapphunds have straight, soft, and sometimes wavy coats on the outside and smooth and dense inner coats. They come with fluffy fringes on the backside of their legs, under the abdomen, and tail. Their dense coat keeps them vitally secured in the extreme cold climate of their native region, which is Finland.

Due to their thick and dense coats, they are heavy shedders. Shedding in a Finnish Lapphund can be handled by brushing it daily and paying attention to its grooming on a weekly basis.

Their super soft fur needs your extra attention, like daily brushing and frequent baths over a month. Brushing their thick coat regularly keeps them matt. Matting is prevalent between legs and behind the ears, where there is more dense hair.

The Finnish Lapphund used to help the Sami, a tribe of nomadic people in Lapland (northern part of Sweden, Finland and part of Russia.) Over the centuries the Sami developed a more sedentary lifestyle and started keeping herds of reindeer. The dogs changed from hunting to herding dogs. After the introduction of the snowmobile, the dogs were used less often but they still have a powerful herding instinct.

This dog is alert, agile and noisy when he works. When he’s at peace with his family, he’s friendly, submissive and calm. His coat is profuse and thick, protecting him from the harsh cold climates of the north. However, it also means he can’t handle the heat well. His coat’s colour can be wolf sable (black), sable(black), sable (brown), wolf sable (brown), brown with tanpoint, blonde or black with tanpoint( often called black and cream), domino ( black), domino ( brown), cream ( black factored),  lilac, blue,  solid black and may have some markings.

He sheds only in season but it can be managed with regular brushing. He needs exercise each day.

This dog breed is affectionate, and can make friends easily, and loves to be around their family members; they make a great family companion. You only need to pay more attention to their exercise, training, and grooming. They may accidentally hit their tail and jump over children due to their herding nature.

However, a Finnish Lapphund puppy growing up with proper training never becomes an aggressive adult. Lapphunds can easily make friends and go easy with other dogs and cats. However, taking them for long walks from the very beginning pulls well-behaved personalities out of them.

Their trait of obeying the commands and performing good companionship makes them vulnerable to getting anxious when left alone. Although they bark and shed a lot, their pricked ears always remain alert for their owner’s command. So you can keep them for herding purposes or as a family dog, too, as this breed is a remarkable human companion! 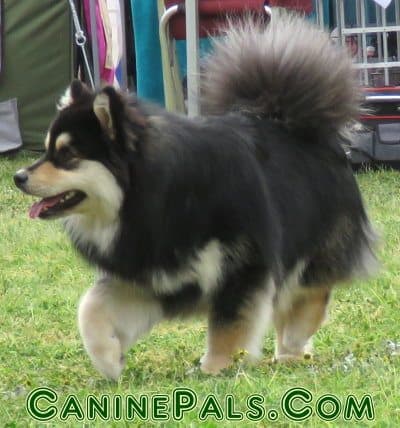 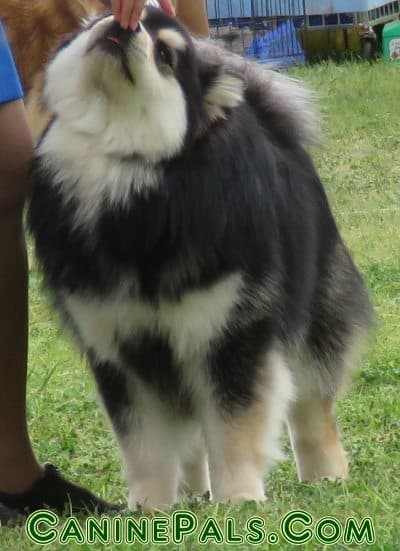 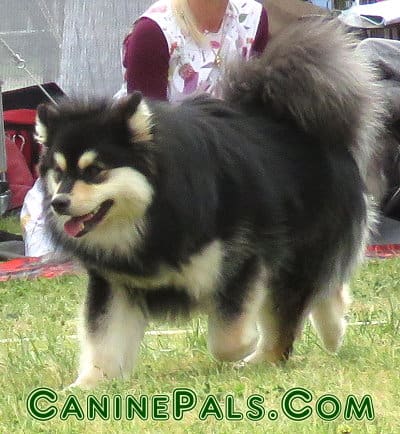