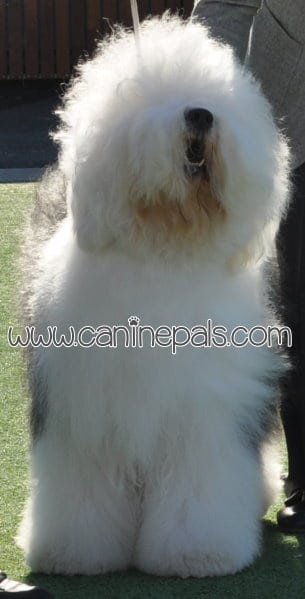 The Old English Sheepdog originated in England in the early part of the 19th century. He’s believed to have descended form the Russian Owtchar and the Bearded Collie. He herded cattle and sheep to the markets and had a nickname of “bobtail” because he has a docked tail which showed his working status and gave his owner a tax exemption.

His coat is his trademark and he’s agile and intelligent, able to handle any task given to him. He performs well in agility, conformation, herding, obedience and herding events. He has a shuffling walk. His coat helps keep him insulated and can be coloured any shade of blue merle, blue, grizzle or gray and may have white markings. He’s athletic and has lots of energy. He’s affectionate with his family but he may try herding people or objects. Although his coat is long, it’s not harder to groom than other dogs, as long as he starts getting groomed when he’s young so he gets used to it. He’s 21 inches in height.