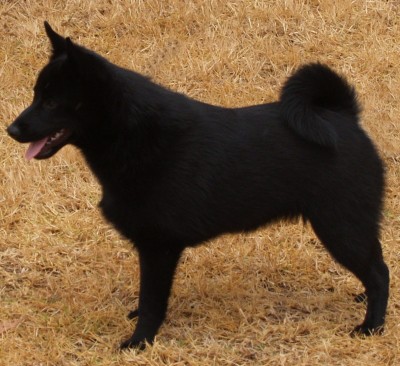 
The Schipperke originally came from Belgium and his size was bred down from a black sheepdog known as a Leauvenaar. He worked as a watchdog, a ratter on river barges and with tradesmen. His name came from “schip” which is Flemish for boat. Another typical nickname is “Little Captain.”

He’s mischievous, active and loves being involved in things around him. However, because of his watchdog skills, he can bark if not trained not to bark. His harsh black coat stands off his body. He has a cobby body and no tail. He enjoys competing in obedience, agility and conformation events until he gets too old to do so. He can live anywhere as long as he can be in a fenced area or on a leash when exercising. His coat only needs to be brushed weekly and bathed occasionally even though he sheds a couple of times each year. He’s 10 – 13 inches high.